Little Orphant Annie’s come to our house to stay,
An’ wash the cups an’ saucers up, an’ brush the crumbs away,
An’ shoo the chickens off the porch, an’ dust the hearth, an’ sweep,
An’ make the fire, an’ bake the bread, an’ earn her board-an’-keep;
An’ all us other children, when the supper things is done,
We set around the kitchen fire an’ has the mostest fun
A-list’nin’ to the witch-tales ‘at Annie tells about,
An’ the Gobble-uns ‘at git you
Ef you
Don’t
Watch
Out!

Onc’t they was a little boy wouldn’t say his prayers,--
So when he went to bed at night, away up stairs,
His Mammy heerd him holler, an’ his Daddy heerd him bawl,
An’ when they turn’t the kivvers down, he wasn’t there at all!
An' they seeked him in the rafter-room, an' cubby-hole, an' press,
An’ they seeked him up the chimbly-flue, an’ ever’wheres, I guess;
But all they ever found was thist his pants an’ roundabout—
An’ the Gobble-uns’ll git you
Ef you
Don’t
Watch
Out!

An’ one time a little girl ‘ud allus laugh an’ grin,
An’ make fun of ever’one, an’ all her blood an’ kin;
An’ onc’t, when they was “company,” an’ ole folks was there,
She mocked ‘em an’ shocked ‘em, an’ said she didn’t care!
An’ thist as she kicked her heels, an’ turn’t to run an’ hide,
They was two great big Black Things a-standin’ by her side,
An’ they snatched her through the ceilin’ fore she knowed what she’s about!
An’ the Gobble-uns’ll git you
Ef you
Don’t
Watch
Out!

An’ little Orphant Annie says when the blaze is blue,
An’ the lamp-wick sputters, an’ the wind goes woo-oo!
An’ you hear the crickets quit, an’ the moon is gray,
An’ the lightnin’-bugs in dew is all squenched away,--
You better mind yer parents, an’ yer teachers fond an’ dear,
An’ churish them ‘at loves you, an’ dry the orphant’s tear,
An’ he’p the pore an’ needy ones ‘at clusters all about,
Er the Gobble-uns’ll git you
Ef you
Don’t
Watch
Out!

When I was a girl, I loved poems. I read them a lot. I used to shut myself in my parents’ bedroom with a copy of Best Loved Poems of the American People and sing my way through it. It was at least 3 inches thick, so I never made it to the end.

I couldn’t tell you which poem was my favorite. I had lots of favorites, and Little Orphant Annie was one of them. I’m not sure where I read it, but I think it was probably in my third or fourth grade Voyages in English book. I have scoured the bookshelves for that book, but I seem to have given it away.

I loved—I still love—everything about the poem, but most of all, I love the scariness of it. It used to make me shiver. I didn’t know what kivvers meant, but I thought it was something terrible, and it sent a thrill of terror through my bones. I was an adult before I finally figured out it was only covers. I’m so glad I didn’t know then.

There was a black and white illustration in the book, but it was only the hearth, which was frustrating because I wanted to see Annie! I had a vague image of a poor little girl, and I think I assumed she was black because in the South in the 50s she would have been, but it was never a clear picture.

Today, though, I finally found out what she looked like on Wikipedia. 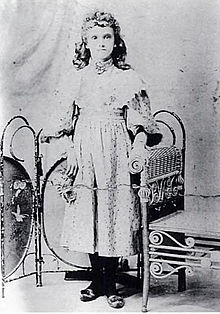 She was a real person who lived with James Whitcomb Riley’s family when he was growing up. Her name was Mary Alice (Allie) Smith. The Wikepedia article says that the poem was originally entitled The Elf Child. For the third printing, Riley changed the name to Little Orphant Allie, but a printing error changed Allie to Annie.

The article also says that the poem was the inspiration for both Little Orphan Annie, which seems likely enough, and Raggedy Ann, which was a surprise. There is a legend that the creator of the the Raggedy Ann doll named her after Little Orphant Annie, and another Riley poem, The Raggedy Man.

The accent, which I never would have guessed, is a 19th century Hoosier accent. If you want to hear what Riley thought that sounded like, you can hear him reading the poem if you scroll down in the Wikipedia article here.

This is fascinating, though I don't have any big attachment to the poem. I highly recommend that everyone go to that link in the last paragraph and listen to the reading. One thing that immediately struck me about it is that it sounds like the country people in old movies and tv shows.

Also fascinating: as a child I read the Little Orphan Annie comic strip and always vaguely wondered about the backstory. Well, here it is:

That is pretty wonderful in how it tells you so much in such a short space of words. I suppose that is what good poetry does.

So strange. Just yesterday I was thinking about Eugene McCarthy and how when he lost the Indiana primary against Robert Kennedy in 1968, he gracelessly put down James Whitcomb Riley, and how that was the finishing touch that made me decide for Kennedy back then.

I grew up with this -- what happy memories -- "An’ the Gobble-uns’ll git you
Ef you
Don’t
Watch
Out!
Had a wonderful illustrated James Whitcomb Riley's Poems of Childhood for the longest time - just now looked and can't find it! Agh! Thanks for this!

I wish I could say that I loved poetry as a child, but I didn't, really. I do remember reading this poem, probably in a school textbook.

Wow, Marianne, that's startling. What a dumb thing for McCarthy to have done.

I actually worked for McCarthy, as in I called people on the phone and asked them to vote for him. Basically, I had no idea what I was doing.

My brother and I had a big book of children's verse. Mainly it was ballads and 'narrative poems.' I liked it a lot. In a sense they were 'songs' - in the sense that the Iliad is a song :) I can remember leafing through it. It was illustrated. I think my grandmother sent it from England, but I'm not sure of that. I'm not sure if I liked the 'poetry' of it, or if I liked the 'stories in verse' side. I think it was probably closer to the latter, but I don't know.

I dont remember any spooky poems in the book we had.

During the last war, there was a radio program that broadcast ghost stories on the night my grandparents went out - I think to Bingo, but it was their weekly night out whatever it was. My father used to sit in the blacked out house listening to ghost stories with, he said, his hair standing on end.

He was supposed to be in bed or at least in his room. After theey left he crept downstaurs to turn on the radio and listen to the ghost program. Some children do love scarey stories. Its anadult recognition that the world itself is frightenibg

Once when our electricity was out for 6 days, I went to the library and got cassette tapes of War of the Worlds, and we listened to them at night in the dark. It was fun.

We never watched scary things when we were kids, but I read them. I had a book of stories by Alfred Hitchcock with wonderful illustrations. And then I read horrid comics when I could find them in the paper drive truck.

I had and still have a book of ghost stories that was given to me for Christmas when I was 12. I know that for sure because there's an inscription in the book. I really liked it although some of the stories were seriously scary, especially this one. I'm a little shocked to learn that it first appeared in the Christmas issue of a magazine.

I listened to that recording, Maclin. Very interesting

March 22 I posted that I had lost the book, Poems of Childhood, originally copyrighted 1887 - this edition 1940. I found it today while cleaning up my younger daughter's bookshelves. I am indebted to Janet and this blog for continuing to make me notice the world around me!

See comment just above for a photo added to it. This comment is only to get a notice at the top of the Recent Comments list.