I would prefer to think that a more accurate title for Patrick Deneen's Why Liberalism Failed would have been Why Liberalism Is Failing. That it is failing seems clear. It's a Carnival Cruise liner heading for the rocks while the drunken captain tries to seduce a passenger, a 747 with three engines out and slowly losing altitude, piloted by a man who refuses to believe that the cumulo-granite mass ahead is an unappealable statement of natural law. But I still allow myself a certain hope that the wreck will be somehow avoided, or that when it comes it will be a relatively gentle impact from which most of us will emerge relatively unharmed.

However, I don't think that's the most likely outcome. I think that if the liberal order does crash and burn it will be a very destructive event, and that whatever new order arises will be, at least for the next century or two, a pretty ugly and perhaps really evil one. An old friend of mine used to say that he lusted for the apocalypse, and I can sympathize with the feeling. But he had no children, and I have children and grandchildren.

And anyway, I rather like much of what liberalism has produced. All in all, I rather like representative government, and science and technology--surgery with anaesthesia, for instance--and heretofore-impossible levels of prosperity and personal freedom. However deficient, however productive of unwanted and unforeseen consequences, however unsustainable it may all be, I would prefer that we be able to keep those things that most of us agree are basically good things.

And I don't think it's possible to construct a new order by saying "we'll keep this, but discard that, and add this other." The development of civilizations doesn't happen that way. That's not to say it can't be guided, that the good can't be fostered and the bad suppressed, but it can't be assembled from pre-fabricated parts. It can't even be grown like a plant without the proper seed, soil, and climate. I went on record here some years ago as describing myself, where our immediate political and cultural situation is concerned, as a liberal conservative, meaning (in part) that I would like to conserve what I value in the liberal order. (It's in my book! Which has sold literally dozens of copies!) So I would like to believe that it isn't all over yet.

I pause here to make it clear that we're talking about liberalism in the broad philosophical and historical sense, not the contemporary political faction which also bears the name. It's probably accurate to say that liberalism in this broad sense is more or less identifiable with modernity, with the characteristic way of looking at the world that has obtained in Western culture since the 18th century at least. The American republic is its most visible and successful implementation.

Deneen points out that the "liberal" and "conservative" factions in current politics, the "left" and the "right," are all liberals in that they basically accept the philosophical foundations of classical liberalism, and are more accurately described as left-liberal and right-liberal. This is not new--I've seen those terms used for many years, with right-liberals being the true classical liberals and left-liberals being...what, exactly? Deneen uses the term "progressive liberalism," which is handy; I don't know if it's original with him or not.

I've always been a little puzzled as to how the transition from classical to progressive liberalism happened. The latter is now a form of statism, and at first glance it may seem unreasonable to see it as a natural development of classical liberalism, which is in great part about freeing the individual. Dennen devotes a whole chapter, "Uniting Individualism and Statism," to the question of how and why this is so. He argues that progressive liberalism is not an attempt to reverse individualism, but to preserve one aspect or sort of individualism that is endangered by another:

The more individuated the polity, the more likely that a mass of individuals would inevitably turn to the state in times of need. This observation, echoing one originally made by Tocqueville, suggests that individualism is not the alternative to statism but its very cause.

The individualism arising from the philosophy and practice of liberalism, far from fundamentally opposing an increasingly centralized state, both required it and in fact increased its power. Indeed, individualism and statism have powerfully combined to all but rout the vestiges of pre- and often nonliberal communities animated by a philosophy and practice distinct from statist individualism. Today's classical liberals and progressive liberals remain locked in a battle for their preferred end game--whether we will be a society of ever more perfectly liberated, autonomous individuals or ever more egalitarian members of the global "community"--but while this debate continues apace, the two sides agree on their end while absorbing our attention in disputes over the means, thus combining in a pincer movement to destroy both the vestiges of the classical practices and virtues that they both despise.

The expansion of liberalism rests upon a vicious and reinforcing cycle in which state expansion secures the end of individual fragmentation, in turn requiring further state expansion to control a society without shared norms, practices, or beliefs.

For a long time I've thought that the essential flaw of liberalism is its attempt to organize collective life without making a commitment to any core principles as to what human life is and what it is for, to prescind (or attempt to prescind) from the ultimate questions of meaning, and to operate on the assumption that people can believe whatever they want to believe on those questions as long as they don't bother other people. As has been pointed out over and over again, this requires that there be some basic metaphysical and ethical consensus among citizens--specifically, what we call the Judeo-Christian tradition--and it begins to disintegrate when that consensus does so, as it manifestly has done in the U.S.

And I've hoped that the disintegration could be avoided if we could return to what I take to be the original constitutional vision, a federal system which allows for real philosophical and practical diversity among the states--if, to be clear, we could defuse our current conflicts by abandoning the idea that the central government must enforce upon all the states exactly the same responses to questions, such as abortion, on which there are irreconcilable differences of opinion arising from irreconcilable philosophical views. Part of this solution, if it were a solution, would be the encouragement or at least the non-discouragement of all those entities--"mediating institutions," as they're often called, which stand between the individual and the state: family, religion, local community.

Well, Patrick Deneen is here to quash that hope. He thinks the problem is even more basic; in his view the system is working as designed. The diminishment of mediating institutions is a feature, not a bug. In his view, it is not the misuse of the Constitution that's the problem, but the document itself. Liberalism, he maintains, is in fact intended to reduce and eliminate every social structure that would limit the free exercise of the individual will, with only the state granted that limiting power, and then only in the name of protecting the same exercise of will on the part of others. In a striking bit of rhetoric, he describes the Constitution as a species of technology which implements that function:

The precondition of our technological society was that great achievement of political technology, the applied technology of liberal theory, our Constitution. The Constitution is the embodiment of a set of modern principles that sought to overturn ancient teachings and shape a distinctively modern human.

That puts things in a different, and, to me, rather unwelcome light, as I tend to see the Constitution, as a practical document, as a bit of genius. Some of what Deneen says in that area depends on support from sources like The Federalist Papers, and I'm not in a position to say whether they justify his conclusions. But what is happening around us certainly seems to fit.

There's a great deal more in the book, and I encourage anyone who's interested in these matters to read it. It's fairly short (under 200 pages) and very accessible to the non-academic.

By the way, at The American Conservative, Rod Dreher reports on a very interesting conversation between Deneen and Ross Douthat. I must state for the record that I've been saying for over thirty years that we would see more and more people who believe that Brave New World describes a very desirable utopia.

I more or less agree with Douthat's point about the world outside the media seems to be doing a lot better than it looks from inside. Which is certainly not to say that all is well.

Somewhat related: I recently had a chance to look at the August 1938 issue of Progressive Farmer. This commentary about the influence of the automobile struck me. "So it has proved," indeed. You may need to enlarge this to read it. 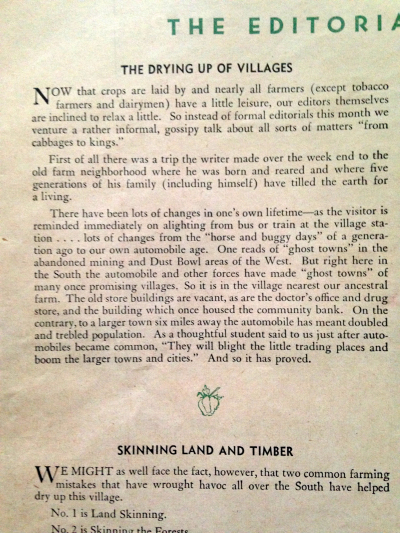 The cover is by N.C. Wyeth. Sorry it's out of focus. There's a caption at the lower right that says "Lunch for Father," or maybe "Daddy." 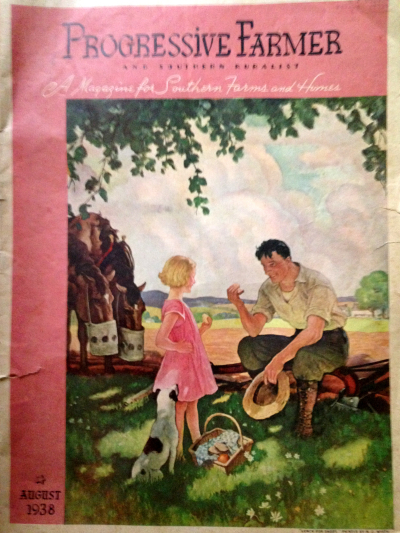 I've been reading some stuff about Dostoevsky's philosophy/politics recently and he basically came to a similar conclusion to that of Tocqueville after watching liberalism, which was an import to Russia from France and Germany, quickly work its way through the Russian elite in the 1800's.

What makes Dostoevsky an interesting observer is that he's watching the process as a non-Westerner, a person totally outside the system of Western 'Enlightenment,' which had come into Russia as a novelty.

Re: the automobile, I posted this on a thread about technology in 2013(!).

‘ "I’m not sure he’s wrong about automobiles,” he said. “With all their speed forward they may be a step backward in civilization — that is, in spiritual civilization. It may be that they will not add to the beauty of the world, nor to the life of men’s souls. I am not sure. But automobiles have come, and they bring a greater change in our life than most of us suspect. They are here, and almost all outward things are going to be different because of what they bring. They are going to alter war, and they are going to alter peace. I think men’s minds are going to be changed in subtle ways because of automobiles; just how, though, I could hardly guess. But you can’t have the immense outward changes that they will cause without some inward ones, and it may be that George is right, and that the spiritual alteration will be bad for us. Perhaps, ten or twenty years from now, if we can see the inward change in men by that time, I shouldn’t be able to defend the gasoline engine, but would have to agree with him that automobiles ‘had no business to be invented.’ ” '

I remember that quote. It was prescient of Tarkington.