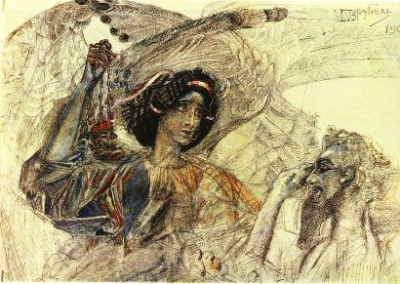 THE PROPHET
(translated by Maurice Baring)

With fainting soul athirst for Grace,
I wandered in a desert place,
And at the crossing of the ways
I saw the sixfold Seraph blaze:
He touched mine eyes with fingers light
As sleep that cometh in the night:
And like a frighted eagle’s eyes,
They opened wide with prophecies.
He touched mine ears, and they were drowned
With tumult and a roaring sound:
I heard convulsion in the sky,
And flights of angel hosts on high,
And beasts that move beneath the sea
And the sap creeping in the tree.
And bending to my mouth he wrung
From out of it my sinful tongue,
And all its lies and idle rust,
And ‘twixt my lips a-perishing
A subtle serpent’s forked sting
With right hand wet with blood he thrust.
And with his sword my breast he cleft,
My quaking heart thereout he reft,
And in the yawning of my breast
A coal of living fire he pressed.
Then in the desert I lay dead,
And God called unto me and said:
“Arise, and let My voice be heard,
Charged with My Will go forth and span
The land and sea, and let My Word
Lay waste with fire the heart of man.”

In my effort to read the hundreds of books that have been moldering on my shelves for lo these many years, I am currently reading Have You Anything to Declare by Maurice Baring. Baring was a late 19th/early 20th century author and Catholic convert who wrote plays, novels, non-fiction, and poems. He was also, as you can see, a translator.

Being quite indolent, I looked around the internet to see if I could find Baring’s translation so that I wouldn’t have to type it. I had no luck, but I did find this YouTube video of a Russian reading the translation.

I wanted to compare it to another translation and here is one by A. Z. Foreman.

My spirit wracked with thirst for grace,
I wandered in a gloomy place
Till at a crossing of the ways
I saw a six-wing'd Seraph blaze.
With fingers light as dream at night
He brushed my eyes and they grew bright
Opening unto prophecies
Wild as a startled eagle's eyes.
He touched my ears, and noise and sound
Poured into me from all around:
I heard the shudders of the sky,
The sweep of angel hosts on high,
The creep of beasts below in the seas,
The seep of sap in valley trees.
And leaning to my lips he wrung
Thereout my sinful slithered tongue
Of guile and idle caviling;
And with his right hand bloodied wet
In through my wasting lips he set
A Serpent's wise and forkèd sting.
And with his sword he cleft my chest,
And reft my quaking heart out whole,
And thrust inside my sundered breast
A blazing shard of living coal.
There in the desert I lay dead
Until the voice from heaven said:
"Arise O Prophet! Work My will,
Thou that hast now perceived and heard.
On land and sea thy charge fulfill
And burn Man's heart with this My Word."

And here is another video with an actor reciting the poem in Russia. I found it rather good.

I don’t really have much to say about the poem, except that I wonder how the Soviets managed to suppress all this passion and fire for so long.

It is good to see the word indolent used.

I'm only just now reading the poem. Sometimes I'm so focused on formatting that I don't pay much attention to the words. As a poem it makes me wish I could read the original--both translations sort of sound like translations. I like elements of both but Baring's last line is *way* better, and to my thinking more appropriate, though obviously I have no idea which is more accurate.

Reading what I take to be a more or less literal translation on that second video is interesting. Certainly makes the others sound better.

Thanks. When I red through the post this morning, I thought about asking you to add that link. I really enjoyed that book.