About suffering they were never wrong,
The Old Masters: how well they understood
Its human position; how it takes place
While someone else is eating or opening a window or just walking dully along;
How, when the aged are reverently, passionately waiting
For the miraculous birth, there always must be
Children who did not specially want it to happen, skating
On a pond at the edge of the wood:
They never forgot
That even the dreadful martyrdom must run its course
Anyhow in a corner, some untidy spot
Where the dogs go on with their doggy life and the torturer's horse
Scratches its innocent behind on a tree.

In Brueghel's Icarus, for instance: how everything turns away
Quite leisurely from the disaster: the ploughman may
Have heard the splash, the forsaken cry,
But for him it was not an important failure; the sun shone
As it had on the white legs disappearing into the green
Water; and the expensive delicate ship that must have seen
Something amazing, a boy falling out of the sky,
Had somewhere to get to and sailed calmly on.

Auden is a poet whom I don't think I've ever gotten to know as well as I should. That's partly a result of having kept a little Modern Library Selected Poetry of W.H. Auden on my bedside table for a long time, thus reading it only when I was sleepy, thus neglecting or not grasping the longer or difficult poems. The selection was made by Auden himself in the late '50s, and includes 100 poems. His Collected runs over 900 pages and I don't know how much good work may be missing from the Selected. I've sometimes wondered why one of his most famous poems, "September 1, 1939", is not included in the latter, and found to my surprise that Auden had disavowed it and mostly refused to allow it to be reprinted. (See Wikipedia.)

Anyway, this is another of the Poems That Often Come To My Mind. Especially those last two lines. This is the picture that Auden is referring to. 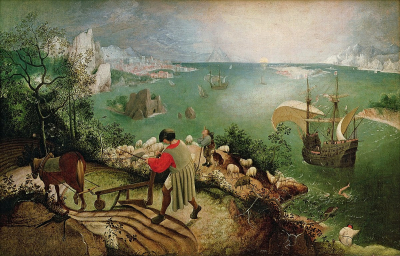 The poem's Wikipedia page has information on two other paintings that may have suggested the images in the first part of the poem, which clearly don't refer to the Icarus painting.

I could have sworn that I had written a blog post about this, but it must have just been something I wrote for my English class--or maybe Art Appreciation. I love the pictures--all of them and the poem.

Those last two lines remind me of Frost's Out, Out --.

No more to build on there, and they, since they
Were not the dead one, turned to their affairs.

I think we have talked about that here before.

I've considered "Out, out--" for this series, actually. Not sure if I would do it or not. But yeah, those last two lines are the same kind of thing, and just as good.

So, I sat down to watch the last episode of the new season of Endeavour, and it's called Icarus.

It's funny. PBS calls it Requiem, but the name at the beginning of the show and the information on line say Icarus,

I've been thinking that one difference in the poems (Frost/Auden) is that in the Icarus painting, not only do the people go about there own business after Icarus falls from the sky, but they have missed the glory of his flight. There is that one man in the painting looking up, but in the wrong direction. Maybe he is looking, though, for something he saw from the corner of his eye.

No glory at all in the Frost poem as I recall. The death is just a death, with no particular significance.

Right. That is what I meant.

May be only my imagination, but that last stanza seems to play off Matthew 5's "he causes his sun to rise on the bad as well as the good, and sends down rain to fall on the upright and the wicked alike".

Re "September 1, 1939" -- I've always thought Auden must have been somewhat ashamed of scampering off to America as war loomed in Europe. Perhaps that explains some of his disavowal of the poem.

I don't know. There's a Wikipedia page for the poem that discusses its suppression but doesn't say much about the reason.

Speaking of Bruegel, has anyone seen The Mill and the Cross? I just found the book at a very good price and wondered about the film.