The other shelves are to the right of the doors, against the side wall and set back a foot or so. All the non-classical LPs are on them. Between those shelves and the others are a lot of hanging clothes, mostly coats and sweaters. You have to move the clothes out of the way to see the shelves, and maybe take some of the clothes out to actually reach the albums. In other words, the non-classical LPs are not readily accessible.

Several months ago I took all the clothes out of that side of the closet and picked out several dozen LPs from the non-classical shelf and put them on a bookshelf out in the room. Some of them were familiar ones that I haven't heard for thirty years or more and wanted to hear again. Some, I'm embarrassed to say, I've never heard--I picked them up for fifty cents or a dollar at Goodwill or somewhere over the past twenty years or so, between the time people started discarding their LPs in favor of CDs and the time vinyl started coming back into fashion. I only stopped doing that when I ran out of shelf space and promised my wife I wouldn't expand any further. I'm now working my way through this group I've extracted from the closet. When I'm done with them I'll swap them for another bunch.

It may very well have been more than forty-five years since I last heard The Mothers of Invention's Absolutely Free. I can't recall having listened to it any time after 1970 or so. Back then I thought of Frank Zappa and The Mothers of Invention as basically a comedy outfit, and thought they were very funny. A bit later when people had begun to make much of Zappa's music as music and the Mothers had officially broken up, I lost interest, a condition in which I remained for many years. In the late 1980s I let a co-worker who liked that sort of thing borrow my copy of the first MoI album, Freak Out (1966), and never got it back. I regret that. Apart from the fact that there are several interesting tracks on the album, the physical object was a sort of curio.

At the age of roughly twenty I thought their second album, Absolutely Free (1967) was very funny. The album cover includes an address to which you can send $1.00 for a copy of the the "libretto," i.e. the lyrics and spoken bits, which Verve records refused to include with the album. I never did that, apparently, which is just a bit surprising. Not surprisingly, it can now be found online, and you can view the whole thing in what I take to be something close to a facsimile here.

Oh, those innocent days, when cultural decay could be symbolized by "plastic people"--and it was, by the way, a somewhat valid and accurate complaint, especially for the way women dressed and wore their hair (all that hairspray!). But as humor this has not aged well, and that's true of most of the album. The absurdist bits are not as funny as they seemed at the time. The once-biting social commentary no longer has many teeth. Zappa used to apply the word "lame" to people he disliked, and it's just the word for much of the lyrical content here ("NAZIS "...yeah, right). The skit describing a middle-aged man's sexual fantasy about a thirteen-year-old girl is just disgusting, nauseating when it turns toward incest. The final track, "America Drinks And Goes Home," with its smarmy cocktail-lounge singer, still works for me.

But all in all my reaction is more or less the opposite of that of my twenty-year-old self: the comedy is no longer very interesting, but the music is. Behind a lot of the silly gabbling there's some complex musical stuff going on. And I like the one long purely musical piece, "Invocation and Ritual Dance of the Young Pumpkin." I think the title is a nod to "The Rite of Spring." I'm pretty sure there are some quotations from classical works, possibly Stravinsky's, in other places on the album, though I can't quite place them.

When this album goes back into the closet it will probably stay there.

Oddly, one little mental cockleburr from the collage on the back cover of Absolutely Free has stayed with me for many years. There's an image of a leafless tree with the words "This tree is ugly and it wants to die." Here's a twelve-year-old post where I refer to it. A variation of it had presented itself to my mind; "This culture is ugly and it wants to die." And I've been thinking about it lately whenever I read about the manifest cultural death wish on the part of a large and influential segment of our society. Rod Dreher has a rather long but mostly interesting and accurate post on that subject, emphasizing the role it has played in producing the Trumpian reaction. I still find it hard to understand that so many otherwise intelligent people don't see that vilifying "white people," especially white men, essentially demanding that they commit ethnic and cultural suicide, is inevitably going to produce a bad, possibly very very bad, reaction.

I don't have a very high opinion of white people who use "white people" as a pejorative, not in a good-humored way (as in "White men can't jump"--good-natured ethnic humor is actually healthy, I think), but venomously, with real malice and contempt. I hear a lot of that these days. It's one thing, a good thing, to face the evils of your own culture, another to see nothing else in it. And this is made more distasteful by the seeming belief of those who do it that they are somehow exempting themselves from the condemnation, or purchasing some sort of deliverance from it. Or something--I really can't claim to understand it.

War Beetle! * Unfortunately I couldn't get my phone camera to focus on this little bug, but you get the main idea: the bright blue and orange. Very handsome little bug it was. 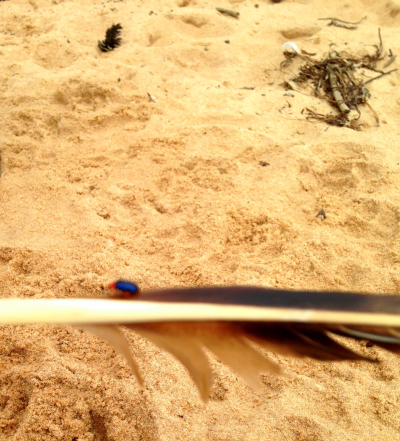 These are called Stargazer lilies. 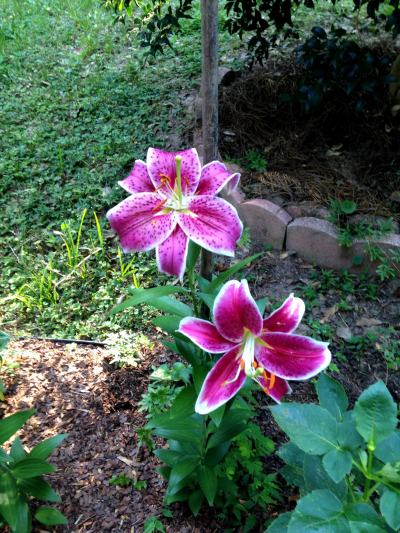 * Auburn University's colors are orange and blue, its mascot is an eagle, and its battle cry is "War Eagle!"

The little war beetle does look quite handsome. I don't normally like bugs. :)

Gosh. I remember reading that blog post at the time. 12 years ago!

Those lilies have an awful pollen, although they are often used in florist arrangements. I throw them out immediately.

I'll insist that they stay outside. :-)

I think I know how you feel, Louise.

Re that linked Dreher post, I do wish he'd used the term "barbarian" to refer only to "the sort that repudiates our civilization, even as he benefits from it," and not also used it to describe folks migrating out of Africa.

Agreed. He explains what he means but it's still s poor choice of words.