There's a remark from Chesterton that I see quoted from time to time, something to the effect that the doctrine of original sin, i.e. the intrinsically defective nature of man, is the only one of the Church's teachings that is provable by observation...I think that's the idea. I've been thinking of a sort of converse: that one notion widely held in the modern world is disproven by the same observation. I mean the idea that people are born innocent and good, then corrupted and damaged by "society," and the "conditioning" which it imposes. I started to call this a dogma or doctrine, but it's not really that explicit or, well, dogmatic--it's more just a vague presupposition.

At any rate, it's hard to see how anyone can be around children very much at all and still hold that idea. I remember my daughter, mother of two young sons, laughing about a woman watching some small children who happened to be playing nicely at the moment, cooing that "It would be so wonderful if we could always be so sweet and innocent." My daughter certainly has cause to laugh. Those two grandsons, ages now six and eight, stay with us a lot in the summer when school's out, and they provide frequent illustrations of the point. They are delightful: full of wonder and curiosity, beautiful, bright, clever, funny, energetic to say the least--all the things that are so appealing to us in children--and I love them massively. But they can also be quite appallingly selfish, dishonest, and abruptly violent when one of them torments the other past a certain point of endurance. Often these episodes of badness are funny, but that's only because they're so small, transparent, usually more or less harmless, and quickly over.

The boys are also, like most children, very quick to grasp the concept of legalism and see its uses:

I told you not to push his head under water!

Nobody had to teach him that stuff. And no theological or scientific framework is needed to prove the fact.

A few weeks ago I mentioned John Courtney Murray's We Hold These Truths, saying that what I (not having read the book) take to be Murray's contention, that the American ideal of religious pluralism and Catholic faith are not fundamentally incompatible and are able to co-exist, is no longer viable. Maybe it's not just Catholicism but serious Protestantism as well. (Oh wait--it was not a few weeks ago, it was two months ago.) Anyway, as it happens, the book was on the list of those that Janet is reading at her Reading My Library blog, and she has now read and reviewed it. Here's a direct link to the post, in case you're reading this after it's no longer the first one. I am going to resist snagging one passage that she quotes from the book and that seems to me an excellent description of the situation we're in now, which Murray at the time (1960) seems to have thought we were luckily not in. I'm resisting it because it's better for you to read the whole review. Maybe it's better to read the whole book, I don't know--I probably won't, for sheer lack of time.

But I will repeat what I keep saying, feeling very Cassandra-like: our political factions are playing with fire in their desire to crush each other.

Another LP from the closet: Joni Mitchell's The Hissing of Summer Lawns. Joni Mitchell has been for me one of those artists whom I admire more than like. I had a discussion with someone on Facebook a while back about Steely Dan, of whom I could say the same thing. The other person argued that SD's work is of extremely high quality, and he was right, it is. But for whatever reason of personal taste I've never really liked them all that much. The same is true of some (much?) of Joni Mitchell's work.

I wrote about her album Blue in the very early days of this blog, when it was still on Blogger. I was going to link to it, but it doesn't seem to be here. I've suspected before that some of those posts didn't make it through the Blogger-to-Typepad migration. Fortunately I have a backup of the old site. The review is short, so I'll just paste it in here:

This is a great album. So why don't I like it better?

Let's get that question out of the way first. The fundamental problem is that the personality that emerges from Joni Mitchell's recordings is somewhat off-putting to me. She comes across as the sort of sensitive romantic who's very conscious of her own sensitivity and romanticism and wants you to be as taken with it as she is. And then, on the immediate sensory level, there's her voice, which is very versatile and sensitive but just isn't to my taste--it doesn't touch me emotionally, and there's nothing I can do about that.

Nevertheless, setting those personal quirks of taste to one side as far as possible, I very much see why critics use terms like "landmark" and "watershed" to describe Blue. It's just plain brilliant. The flow of inventive melody never stops, and Mitchell's perfectly controlled voice negotiates their range and complexity effortlessly. And while the lyrics are of a confessional nature that's not to my taste (and they lapse into occasional hippie-isms that now sound dated), they're coherent, articulate, and elegantly and seamlessly wedded to the tunes. The spare acoustic arrangements are beautiful, the touches of backup singing always perfectly placed. To reverse Dorothy Parker's famous remark, for those who don't like this sort of thing, this is the sort of thing they will like anyway. I have to call it a classic in spite of myself, some kind of Platonic ideal of the female singer-songwriter genre.

The Hissing of Summer Lawns, on the other hand, is also a great album. And I really like it. I remember hearing it a few times when it came out (1976) and thinking that it seemed interesting. But I didn't buy it--the copy I have is a used one and a fairly recent acquisition--and I don't think I'd ever given it a close listen till now. I'm not sure why I like it better than Blue. If I attempt to be somewhat objective, I can't say one is of higher musical and lyrical quality than the other.

Part of my preference is for the general musical style of Lawns. She has a backing band here, and they're mostly jazz musicians. They're really good technically, of course, and that's not necessarily a good thing in pop music--that is, it may just mean that the result is too slick for a genre where directness of expression is very important. But that's not the case here; the unconventional and complex nature of her compositions is well-suited to jazz players. This was apparently the beginning of Joni Mitchell's foray into jazz or jazz-like music, and I think it really works. There aren't that many catchy tunes here, but there's a lot of substance, a lot of interesting detail.

I also find it more interesting lyrically than Blue. There's less of a focus on her and her personal relationships, and more of a look at the broader world. Several of the songs, including the title song, examine the situation of women who have bargained for security and maybe wealth at the expense of some degree of self-respect and independence. That sort of thing can be (often is) treated in a dull ideological sort of way, but these portraits are specific, sympathetic without being sentimental, and very skilfully drawn. The lyrics are so good that one critic at the time of the album's release, not caring much for the music, said that it made for better reading than listening.

It was somewhere toward the end of the second side, even as I was thinking how much I liked it, that I realized that it reminded me of...Steely Dan. There's no accounting for tastes, even one's own.

Here is a strange and atypical track called "The Jungle Line." It's only Mitchell on synthesizer, with a recording of African drums as the rhythm track. It's Henri Rousseau meets urban America, the persistence of the primitive under the machinery of modern life. The picture on the album (also Mitchell's work) captures the feel and idea of it perfectly.

The Babylon Bee, as you probably know, is a Christian satire site which is often quite funny. I liked this piece: "Senator Ben Sasse Offered One Last Chance To Bow To Towering Trump Statue Before Being Thrown Into Fiery Furnace".

Two more Belfast pictures. These two girls were busking in a shopping area in the city center. (Unlike most American cities of its size, Belfast seemed, from my brief impression, not to follow the decaying center + suburbs pattern.) They were playing rock-and-roll, with guitar, bass, and a drum machine, and they both sang. I heard them before I saw them. I couldn't place the song. I kept thinking "what is that?...it's so familiar...what is it?" And finally realized it was Black Sabbath's "Paranoid". They were quite good, and I have to say the harmonized female vocals were actually an improvement on Ozzy's squawk. I didn't manage to get a picture without pedestrians in the way. I would have given them something but I didn't have any of that foreign money on me. 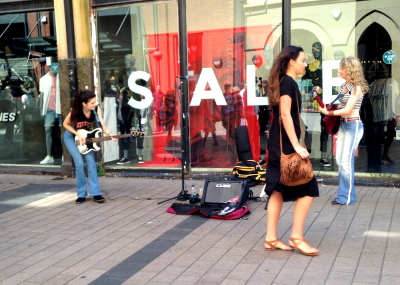 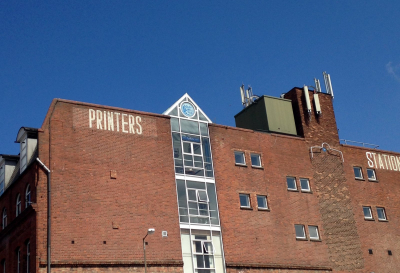 But when you look closely at the triangle at the top: 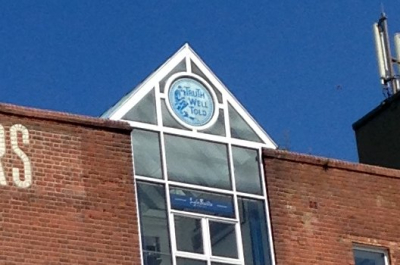 In case you can't read it, that says "Truth Well Told." I'm making that my motto.

Those two girls would have been happy with your American money, Mac!

I spose. I didn't know if it would have been a hassle for them to turn my few dollars into something that would spend (as they say in blues lyrics).

I forgot to say that they seemed to be having SO much fun. Ah, youth....

If I could just borrow a 28 year old body for one afternoon a week, it would be so great.

I don't know. It just seemed like a good, strong age, when you could do physical things easily, but weren't so controlled by your passions that you would choose stupid things.

Of course, when I was 28, I had two children, one of whom was an infant that cried ALL THE TIME, and I was exhausted and in worse shape (barring the worn-out joints) than I am now, so maybe it isn't the best choice.

Now that I think about it, that would probably be a good age for me, too. I think I was 27 when I stopped smoking.