Last night, ah, yesternight, betwixt her lips and mine
There fell thy shadow, Cynara! thy breath was shed
Upon my soul between the kisses and the wine;
And I was desolate and sick of an old passion,
Yea, I was desolate and bowed my head:
I have been faithful to thee, Cynara! in my fashion.

All night upon mine heart I felt her warm heart beat,
Night-long within mine arms in love and sleep she lay;
Surely the kisses of her bought red mouth were sweet;
But I was desolate and sick of an old passion,
When I awoke and found the dawn was grey:
I have been faithful to thee, Cynara! in my fashion.

I have forgot much, Cynara! gone with the wind,
Flung roses, roses riotously with the throng,
Dancing, to put thy pale, lost lilies out of mind,
But I was desolate and sick of an old passion,
Yea, all the time, because the dance was long:
I have been faithful to thee, Cynara! in my fashion.

I cried for madder music and for stronger wine,
But when the feast is finished and the lamps expire,
Then falls thy shadow, Cynara! the night is thine;
And I am desolate and sick of an old passion,
Yea, hungry for the lips of my desire:
I have been faithful to thee, Cynara! in my fashion.

According to this article in The Guardian the title is from Horace and means "I am not as I was in the reign of good Cinara."

If you had asked me I would have sworn that the refrain was "I have been true to thee..." And I don't have the excuse that it's been a long time since I read it, since it was no earlier than last winter (I think). Moreover, I think "true" sounds better. So one of us, Dowson or I, has a better ear than the other. I guess it's probably not me.

Dowson is another one-hit wonder. Well, no, two hits. The other one is very short, so I think I'll include it. I'm not sure whether the Latin sentence is meant to be a title or an introductory quotation. The poem itself seems to be an epigraph for the others. It's at the beginning of the edition I have, before the preface, and is in mixed case, whereas the titles of all the others are upper-case. So I'll follow that example. The quotation, also from Horace, according to this article at the BBC, is "The shortness of life prevents us from entertaining far-off hopes."

They are not long, the weeping and the laughter,
Love and desire and hate:
I think they have no portion in us after
We pass the gate.

They are not long, the days of wine and roses:
Out of a misty dream
Our path emerges for a while, then closes
Within a dream.

A year or two ago I picked up, cheap or free, a nice hardback volume of Dyson's collected poems. I read them all, and there weren't any others as memorable as these two. But I did mark a dozen or so as worth re-reading. I wouldn't argue with someone who thinks that these two, especially "Cynara," are on the overwrought and adolescent side. But I think they're very good, and also that they're among the saddest poems in the English language, though maybe that's partly because Days of Wine and Roses is one of the saddest films ever made. You'll notice several phrases in them that have become part of our culture. Cole Porter has a song called "Always True to You In My Fashion," which I assume borrows the notion from Dowson, but it's a light, silly song. And I think there's a novel title in there somewhere.

I have a little fragment of memory from early adolescence (I think) in which a character in a movie quotes "Cynara." I found it very touching at the time without really understanding why. A few years ago I tried to find out from the Internet what movie it was, but never located it.

Somewhat later in adolescence (I think) I read a book of short stories by John Anthony West called Roses, Roses Riotously. It must have received some sort of favorable publicity because I found it in the fairly small library in the fairly small town of Decatur, Alabama. I remember fragments of some of the stories, and I think they were somewhat cynical, and perhaps they were a bit romantic, too, and I would have found them appealing on both counts. One odd little thing that I recall from them is a character saying to his girlfriend "How many times must I tell you?--there's been no music written since Scarlatti." I'm sure I didn't know who Scarlatti was but I thought that was sort of a cool thing to say, though I think I also recognized that it wasn't intended to make the character look good. Years later when I did know who Scarlatti was I thought the character had half a point.

Dowson was one of the artists counted among the "Decadents" of the late 19th century. He was a mess (see Wikipedia bio), and he died young. He was also a Catholic convert. So even if he was a mess, we can suppose, in absence of reason to think otherwise, that he died in God's grace. And two of his poems, at least, are remembered. One could do worse. 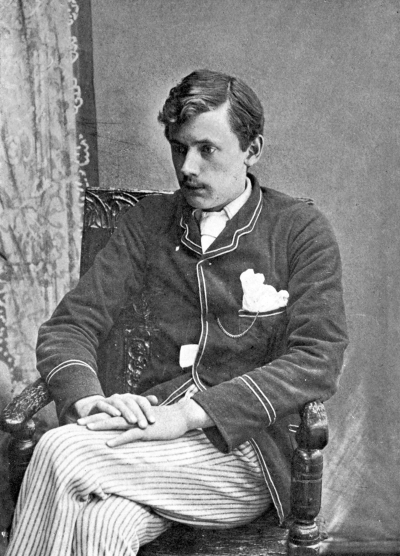 I think it may be Fred Astaire singing in your brain. "I'm always true to you darling in my fashion."

Actually it's Ella Fitzgerald. It's on Volume 1 of her Cole Porter Songbook, which I happened to listen to yesterday. Astaire does it in a movie, I guess? Which one?

Well, I can't find where he did. How funny because I can hear it.

Yeah, looks that way. The lyrics are definitely from a female point of view, so it's not surprising.

That is all very interesting, Mac. Most everything posted here is new to me, so it is all fascinating in its way.

Did that "gone with the wind" in the first line of the third stanza originate with this poem too?

For some reason, in my mind I hear Ronald Colman reciting the poem, but I can't find anything about that. I did find, though, that he was in a 1932 movie titled Cynara about a married man who had an affair.

I'm pretty sure it ("gone with the wind") did originate there. Somewhere in the past couple of days, I guess while reading about Dowson, I saw a mention of Margaret Mitchell saying as much.

Can't call Ronald Colman to mind. I'm pretty sure that wasn't the movie I saw, though. Whatever that was, it was contemporary at the time--i.e. ca 1960.

Rose, Roses Riotously was not the title of the J A West book I was thinking of. That was the title of one of the stories. The name of the book was Call Out the Malicia. Coincidentally, West died just this year, in his 80s. I only vaguely recognize the titles of the other stories.

I kept poking around and found a discussion board where someone wrote that a few lines of the poem were recited in the 1944 movie Laura. Could that be the movie you saw around 1960, maybe on TV? I found the script for it and the Clifton Webb character does them close to the end.

I doubt it. For whatever my memory is worth, it's in color and in a theater. Kinda think it was a woman who said it, too. But all of that is definitely questionable. I've seen Laura in recent years and it didn't ring any bells. I like the movie and love the title song.

Your research is great btw. :-)

This makes me want to watch Laura.

It's good. I remember thinking that it wasn't quite as good as I'd hoped, but still good.

I have seen it many times. And I am supposed to be watching Kurosawa movies. Maybe I can watch it with Bill tonight instead of the cozy murders.

The whole idea of a cozy murder mystery is pretty strange. We have been watching Midsomer Murders fairly frequently. There are a whole lot of them but eventually we'll run out, and I don't know what we'll do then.

This reminds me of Poe's worst poems.

Well, what gets me is Death in Paradise where the murder happens and then the happy reggae music starts.

Two points. Cinara means artichoke in Greek but Dowson changed the spelling. Also, despite the fact that the woman the poet is now with is a prostitute, Cinara was usually the name of a prostitute in ancient Greece, so maybe Downon's Cynara was also a lady of the night.

If I remember correctly, which I may very well not, it may have been a teenage girl with whom he was hopelessly infatuated. Daughter of his landlord or employer or something like that.