I see them working in old rectories
By the sun's light, by candlelight,
Venerable men, their black cloth
A little dusty, a little green
With holy mildew. And yet their skulls,
Ripening over so many prayers,
Toppled into the same grave
With oafs and yokels. They left no books,
Memorial to their lonely thought
In grey parishes; rather they wrote
On men's hearts and in the minds
Of young children the sublime words
Too soon forgotten. God in his time
Or out of time will correct this.

R.S. Thomas (1913-2000) was a Welsh poet and an Anglican priest. You can read all about him at the Poetry Foundation. His poems tend to be rather grim--see, for instance, "Evans." Wales, in his eyes, seems to be a pretty grim place. But his is the sort of low-key unostentatious work that appeals to me.

I had planned to post a different poem this week. But first I let the time get away from me and didn't remember till late last night that this post was due. And then, when I started working on it this morning, I discovered that the poem I'd meant to post presents some serious formatting problems, so I decided to do this one instead. I've had in mind from the beginning that I'd include something by R.S. Thomas, and since I didn't have much time to browse chose this one, the first of his I read and the one that made me go out and buy his Selected Poems in the Phoenix Poetry Series, a very nice little hardback which unfortunately seems to be out of print, though used copies seem to be easy to find (Amazon link).

I will admit that I've probably not read more than a third of it. But when I flipped through it just now I found something curious, a little sheet of paper with some scraps of a poem I was apparently working when I was last reading the book. I'm pretty sure that was at least fifteen, perhaps twenty, years ago. The first line on the sheet is:

Assurance that things are well somewhere

That may be an appropriate comment on "The Country Clergy," and a qualification of the general darkness of Thomas's work. 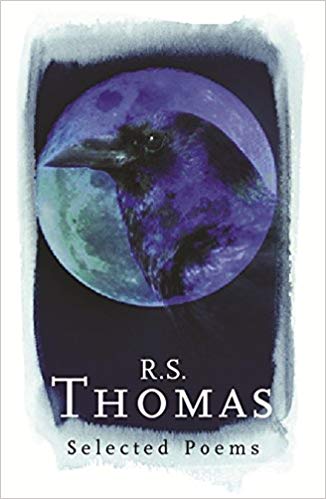 Well I laughed when I clicked on the Poetry Foundation link and his face appeared. He looks as grim as you describe his work. Nice poem though.

I haven't read much of Thomas but what I have read I've liked, including this one, which is new to me.

Each week I am impressed by these poets, and also that anyone knows who they are. I only know the "pop stars" of poetry; the names anyone would recognize. Apparently a lot of good writing has happened in this poorly (un?)paid field!

In my heart I still think poetry is *the* literary art form. I picked up that idea as an undergrad and it's still with me. So off and on I sort of get back into it.

I guess that's supposed to be "in the minds of young children". My eyes aren't great, but you may have written ninds instead.

I like poetry a lot but I don't read as much of it as I feel I should. For me it requires considerable concentration, and often I'm too distracted.

It does take more concentration, but it also takes less time, at least where lyric poetry is concerned, which is what we mostly mean by poetry nowadays. For reasons also having to do with distraction, but working out in a different way, I find it difficult to sit and read for any great length of time. For many years it was just impossible, and I think now it's partly a kind of conditioning. I can manage ten minutes focus on a poem, though.

Lovely poem. And for me a prelude to prayer.

I'm pretty much the opposite. I generally don't sit down to read something unless I have at least 20 minutes to commit to it, and I've always been one of those people who consistently reads for long stretches. With poetry it usually takes me a bit more time to settle into the thing, whereas I can pick up most other reading material and dive right in.

I don't think I've consistently read for long stretches since sometime in my 20s when I was single. When I say it was impossible for many years, I don't mean I wasn't capable of it, just that uninterrupted stretches of time more than 15 or 20 minutes pretty much didn't exist. Now, as I said, it's as if I've been conditioned in some way. I'm trying to break that. And the internet is definitely a factor in aggravating my attention deficit.

When I first started reading these books in my library, I had gotten to the point where I was incapable of reading more than 10 minutes at a time, and that really upset me. I had to force myself to sit and read for longer and longer periods. I've gotten to where that isn't much of a problem anymore unless what I am reading is difficult.

I take heart from your example. I know I can be better if I try. :-) One problem I have now that I didn't 30 and more years ago is the tendency to get extremely sleepy after about 15 minutes or so if it's after midday.