A few years ago I picked up two of William F. Buckley, Jr.'s spy novels from a giveaway table at the library. I've never been a big fan of Buckley's writing as such, but I like the genre, and was curious as to how Buckley handled it. Recently, having begun to look at the overflowing bookshelves in this house with an eye toward culling the stock, I put these two in "read it or get rid of it" status. I picked one of them, The Story of Henri Tod, to sample.

Henri Toddweiss and his beloved sister Clementa are the children of a wealthy German Jewish family. They are in their teens when the Nazi nightmare takes hold. When the Gestapo come for their parents the children are spirited away to live with and be protected by a farm family. (The background of this arrangement is not made clear but I think the family had no previous connection with them, but rather are members of a resistance group.) When he approaches draft age Henri is sent to school in England, and he and Clementa are separated for the first time in their lives, swearing that they will be re-united.

Before that can happen the Nazis learn that Clementa is Jewish. I will leave out the details of how this comes about because they are extremely important to the story. The couple who have been protecting them are shot on the spot, and Clementa is sent to Auschwitz.

The above events are seen in retrospect; the novel takes place in 1961. In Berlin. In August. If you are a better student of history than I am, you will see that it probably involves the erection of the Berlin Wall, and you will be right. Henri Toddweiss is now Henri Tod--"Tod" means "death" in German. He is the head of an underground organization known simply as the Bruderschaft, the Brotherhood, fighting the Communists. Why is he fighting the erstwhile enemies of Nazism? He believes that

What Nazism and Communism had in common was that both systems sanctioned the killing and torturing of innocent people, and if one saw that, all else that was sayable about the nice ideological differences of the two systems was, well, trivial.

Which I pretty much agree with.

Berlin is full of uneasiness about what the Russians may do to get control of their problem, which consists mainly of the fact that people are leaving East Berlin for the West in droves. Buckley's spy protagonist, Blackford Oakes, enters this situation as an agent charged with figuring out what the Russians may actually do, so that the American government and its allies can decide what they will do in response. Oakes is put in touch with Tod.

What happens from here also involves a resourceful young man who happens to be the nephew and secretary of Walter Ulbricht, the East German ruler, his girlfriend, and Hitler's private railroad car, which has been sitting unnoticed in a garage with hundreds of other similar ones. It also involves Clementa; here again I'll say no more, for fear of spoiling the story. And it involves John F. Kennedy, not just off-stage in his role as the American president but in chapters which give us Buckley's notions of what Kennedy might have been thinking.

It's a heartbreaking story, but I don't think Buckley quite does it justice. He is competent, but not brilliant. His approach could be described as understated, but it could also be described as flat. Or, if that's not really fair, let's just say it's lighter than the story calls for. Still, I'm haunted by certain aspects of it. In John Le Carre's hands this basic story would have been devastating, perhaps one of the best of his novels--and I say that as one who thinks Le Carre one of the better novelists working in our time.

I might add that the Americans don't come off very well in this. That's not surprising, I guess, given Buckley's strong anti-communism. I surmise from the story that he thought we should have made an effort to stop the closing of East Berlin. There's an amusing moment in the book where Oakes reads (and agrees with) an article on the subject--by William F. Buckley writing in National Review. I'd be surprised if that article isn't real.

And I'll note in passing that the book contains a really cringe-making sex scene. It involves Oakes and a woman he meets on a train. The incident adds nothing to the book except to give Oakes a bit of James-Bond-ish glamour by making him irresistible to women. It needn't have been there at all, and it needn't have been described. It's not explicit, it's just...I'm having trouble thinking of a word to describe it, and the only one that comes to mind is "corny," in a romance-novel sort of way, male version. I don't think "corny" is used very much now. "Cheesy" is a more recent similar usage.

I do plan to read the other Buckley novel I have, High Jinx. I doubt that I'll keep them, though.

Actually I lean toward the view that it's almost impossible to write effectively in any detail at all about sex. It usually just seems a little silly and somehow embarrassing, unless it's actually meant to be pornography, and in that case the effectiveness is a bad thing. I can't think offhand of any such effort that I thought worked well. Best to just close the bedroom door, making sure, if you think it necessary, that the reader knows it's happening, then leave it behind that door.

I mentioned the term "resistance" above in reference to resistance against the Nazis. It strikes me as ridiculous and a little disgusting that those who object vehemently to Donald Trump and all his works have described themselves as "The Resistance," as if marching, screaming at politicians, and griping on the Internet, all with complete impunity, were in any way comparable to risking torture and death.

I live on the Gulf Coast, 150 miles or so from where Hurricane Michael hit, but I can't tell you anything more about it than you can learn from the news. You probably know it was possibly the most devastating storm ever to hit the Florida panhandle. All we had here was a somewhat windy and cloudy day, not even any rain. I don't think I'd have known that a hurricane was anywhere near, though perhaps someone more weather-wise would have been suspicious of the wind and the rapid and steady movement of the high clouds. Hurricanes of course are a fact of life here. You just have to live with the risk, and sometimes your area is the one that's hit. This one was particularly disturbing, though, because we usually don't get bad ones past the end of September, and it strengthened so much so quickly. When it first developed in the Caribbean and seemed likely to come this way, everybody thought "Oh, even if it does hit here, it won't be that big a deal." And then just a couple of days later it was looking bad, then worse.

I have no big conclusion to draw from this, just a sense of awe. And, I admit, relief that it didn't come here. I always feel a little guilty about that.

When your mailbox comes loose from the post and you don't have time to fix it, you improvise. 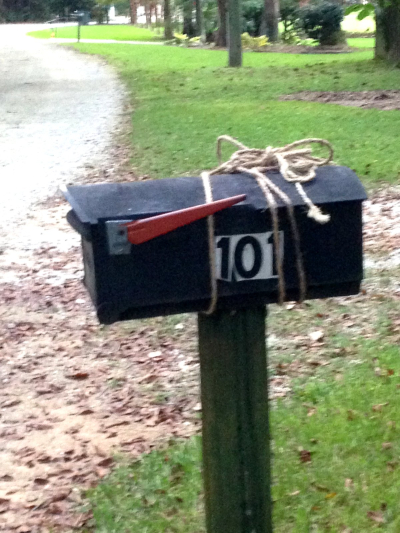 At first I thought maybe the light breeze we had from Michael had upset your mailbox.

And you gazed at the wreckage in shock and horror.

I read a couple of Buckley’s novels years ago. I cant imagine wanting to read more than two. They are OK. But its not his genre

Fiction is not his genre. I mean, not in comparison with a first-rater like Le Carre.

I have never read any fiction by Buckley. I read Nearer My God once and I don't remember anything about it except that I don't think I found it especially about God, but I might have just forgotten.

I never thought about how ludicrous the use of "resistance" is, but you are right.

I just don't read the sex scenes and just hope they don't happen to say anything that moves the narrative forward. It's irritating.

The only book I took with me on vacation was Walden. I was hoping that this would force me to read it, but I only read about 3 pages. I really do not like Thoreau. I really just wanted to read a novel and there was a novel by John Grisham in the house where I was staying, so I started that. I have never read any of his novels before, but I expected them to be better written than this one is. There are places that are kind of choppy.

You can just say you have a shabby chic mailbox.

My SiL had to stay with her niece for about a month. Her house did not have damage, but the area across the street from her was demolished. They couldn't go home because of flooded roads.

Her daughter's family rode out the storm, and didn't have any damage, and were able to take others in. They seem to have helped with rescue work.

Buckley's a significant cultural and political figure, but I don't think of him as a first-rate *writer*.

I've read several of Grisham's. They were all very good stories, but the writing was nothing special. I did appreciate, in one of them, that it dealt with racial stuff in a very realistic way.

Not-too-bad hurricanes and near misses can make you blase about them. Which can be a big mistake. But--I'm hearing the usual "I don't feel sorry for anybody who didn't evacuate " stuff. And that decision is just not as straightforward as it looks. Not everybody has a place to go, or can afford to live in a hotel for weeks until the roads are open again. And usually by the time it's perfectly clear whether or not you should leave it's too late to change your mind.

Anyway, it's a wonder more people weren't killed by this one.

"Best to just close the bedroom door, making sure, if you think it necessary, that the reader knows it's happening, then leave it behind that door."

This is one of the things I appreciate about Mark Helprin. Despite being very much a "modern" writer in most ways, he never lingers over the sex stuff. Or the violent stuff either, for that matter. In both cases you always know what's happening but there's never any lurid quality to it.

I was supposed to go to Panama City, FL in a couple of weeks for a meeting. But apparently it was badly hit by Hurricane Michael, so the meeting has been moved down the coast a hundred miles or so. I may still fly through Panama City, and so have a chance to see the aftermath.

I doubt many meetings are happening in PC right now, apart from workers discussing what to do and how to do it. Mexico Beach, about 20m east of PC, was apparently the most devastated.