In case you aren't in the habit of reading Craig Burrell's blog All Manner of Thing, here are links to his three annual best-of-the-preceding-year posts:

In addition to the always-interesting subjects and opinions thereon, Craig is an elegant writer and a pleasure to read.

While I'm at it, Craig mentions, in this post, that this year is the 100th anniversary of the birth of the Russian composer Mieczyslaw Weinberg. It was Craig's mention of this recording in last year's Favorites post that caused me to investigate it: 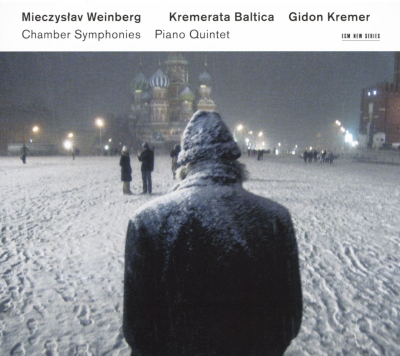 I had thought I might write about it here, but there's a good chance that I won't ever get around to doing that, so I'll go ahead and say something now. It's a double CD and I've only listened to the chamber symphonies, and I like them a great deal. They belong to a species of music that is one of my favorites: "modern," in the sense that it is pretty obviously an astringent departure from the sounds of the 19th century and earlier, but it's not so atonal and dissonant and generally inaccessible to the ordinary listener that said listener (i.e. myself) can't connect with it. Sorry, I don't have the vocabulary to explain that in any more detail. If that sounds like something you'd like, give it a try. There is a sample in the above-mentioned post.

Glad to hear you've been enjoying Weinberg. I'm about 8 or 10 pieces into my survey now, and loving it.

I really do want to watch some Rohmer movies. The only one I've ever seen is the Lady and the Duke - about the French Revolution.

I saw My Night at Maude's several years ago, after having heard about it for many years. I was very disappointed. Thought it was quite dull among other things. Maybe I should give it another shot.

Mac, certainly there's no cinematic flourish to My Night at Maud's. I've seen one other Rohmer film -- Claire's Knee -- and it was much the same in that respect. But in both cases I found the actual substance of the film quite interesting. But I can understand the "dull" complaint. Catch it on the wrong day and I might have felt the same.

As best I can recall, the core of my disappointment was that the conversation wasn't all that interesting, which was a big flaw since it was a mostly conversational film. Could have been a wrong day for me, though.

I can't imagine watching a conversational film where I must read subtitles. I very much enjoyed My Dinner with Andre, but there's a big difference between listening and reading.

That wouldn't bother me because I always have the subtitles/captions on. Prevents the "what did he say?!?"--rewind--play problem.

Stu, you might change your mind if you saw how pretty Maud is. Maybe?

Actually, I find that I often do not remember if I watched a film with subtitles or not. By the time I'm a few minutes into the film the fact that I'm reading the dialogue disappears from my experience of it.

Well now I want to see Maud! :)
The Ethan Hawke movie should be showing up in a Netflix envelope today, looking forward to viewing that one, already forgot title but he's some sort of minister.

First Reformed? I need to put that one on my list, too. In addition to Craig's I've read several reviews that praised it.

Enjoyed First Reformed quite a bit! Ethan Hawke was very good. I can see why the "this should have been nominated" Oscar lists are including his name.

Just put it at the top of my Netflix list.

Typing "queue" is a pain. Why is that? It's only one more letter than "list."