Light On Dark Water
Home Archives
Vinyl Is Too Expensive(!) (?)
Craig's Favorites of 2018

Maybe it's the result of early imprinting, of the fact that moody, mostly black-and-white, mostly European films from the '50s and early '60s were more or less the definition of "art film" when I was in college in the late '60s and first encountered the concept and the thing itself. I remember seeing this one back then, and I remember that it had some strange music and that it was moody and poignant. That was all.

So I have occasionally over the years recalled it and thought I'd like to see it again, and I finally have. When we first joined Netflix it was listed, but when I put it on our queue it went into that mysterious list called Saved in which the Availability column is always Unknown. Some months ago it finally moved into the Queued list, and I've now seen it. (Thunder Road, a very different movie but one of which I have older and yet more powerful memories--a formative influence in the 8th grade, I think-- remains in Saved limbo--or, rather, I suppose, purgatory.)

Sundays and Cybele is French, and the title is not only not a good translation of the French Les Dimanches de Ville D'Avray, but a spoiler. You aren't actually supposed to know that name until near the end of the movie. That complaint aside, it is even better than I had hoped. It is a very, very beautiful film, with some of the most evocative black-and-white photography you'll ever see. But it is also very, very sad. And I mean that as a warning, so don't say I didn't.

The Criterion Collection description is as apt as anything I could come up with:

In this provocative Academy Award winner from French director Serge Bourguignon, a psychologically damaged war veteran and a neglected child begin a startlingly intimate friendship—one that ultimately ignites the suspicion and anger of his friends and neighbors in suburban Paris. Bourguignon’s film makes thoughtful, humane drama out of potentially incendiary subject matter, and with the help of the sensitive cinematography of Henri Decaë and a delicate score by Maurice Jarre, Sundays and Cybèle becomes a stirring contemplation of an alliance between two troubled souls.

The veteran, as we are shown in the opening scene, was a bomber pilot who may have killed a young girl. I think that may have happened in Vietnam, though we aren't told. The eleven-year-old girl has been abandoned by her parents. Their connection is a chance for him to somehow atone for the death of the girl he (presumably) killed, and for her to find the father for whom she longs. The relationship is sweet and innocent--I was a little concerned that it was going to go in a perverse direction, but it does not. Yes, there is a subcurrent of potential sexuality in it--the little girl has a kind of crush on the man, wants to marry him (when she's eighteen), is jealous of him (and he of her), and such--but it's unconscious, and remains something that might develop in the future.

I want to watch it again but the DVD has been here for almost three weeks and I'm not sure I'll have time in the next few days, and I hate to think that I'm keeping it from someone who might like it as much as I do. (I figure Netflix doesn't have many copies of something this obscure.) I've actually thought about buying it, which is the best recommendation I can give, since I don't buy many DVDs and my collection consists of Bergman, Fawlty Towers, and some Doctor Who episodes (Tom Baker period). 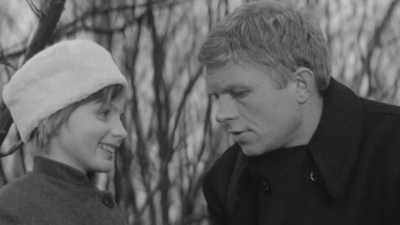 Maybe when that Criterion channel gets started.

This reminds me that have two Netflix DVDs in a drawer that have been there for months. I can only watch them when Bill isn't here, because he won't be interested. I completely forgot I had them. I think I better cancel DVDs.

Wow. I've wondered how long I would have to keep a disk for Netflix to start complaining. Indefinitely, I guess.

Earlier today I watched an interview with the director of Sundays and Cybele that's on the DVD. Made me want to watch it again but it's really too soon, so I'll be looking for it on the Criterion Channel too.

There's an interview with the actress who played the little girl up at YouTube. It has a couple of clips of her and the man in the film (starting around the 4:40 point) that make me feel pretty uncomfortable.

Yes, and without watching that video I can think of two scenes that would make you say that. But the director insists that in his mind it is a pure and innocent relationship. In fact as he explains it the innocence is an essential aspect of the story.

There's an interview with the actress, maybe the same one you link to, on the DVD, which I'm going to watch before I send it back.

I watched the interview. The scenes I was thinking of were not in it. If you thought those scenes were discomfiting, you'd really object to the ones I mean. The director justifies one of them in the interview with him. The other isn't mentioned. There's also an interview with Hardy Kruger, who plays the amnesiac. He talks at length about how the purity of the relationship was what made him want to make the film. It was about to be abandoned for lack of financing but Kruger's American connections (he was in Hatari with John Wayne) helped them find the money.

So...I don't know...I prefer to believe them but there are those few things that make you wonder.

Oh, gosh, don't even want to think about scenes even more discomfiting. There's an interesting essay on the movie at the Criterion website that says seeing the relationship as "innocent and natural" was "a perspective critics at the time endorsed nearly unanimously, writing of the 'pure' love of the protagonists. (In fact, that term was bandied about so often that it begins to sound like denial.)"

The essay is interesting and I guess I agree with at least 70-80% of it. But this quote from Francois Giroud: "The slightest word pronounced by the little girl betrays a possessive, castrating will—visible even more clearly in the mistress." That's grotesque. The mistress is warm and generous. She's initially very suspicious but is won over when she spies on Pierre and the girl romping around in the park, even though the relationship represents a diminution (at best) of her importance to Pierre.