First Reformed Is A Good Movie

Not great, but in many ways very good, and definitely worth seeing. It's about the pastor of a small church in a small New York town, a part of what we generally refer to as one of the "mainline" Protestant denominations, presumably the Dutch Reformed (I can't remember whether this is stated explicitly or not). Like so many such churches, its membership has dwindled and its once significant role in the life of the area is now literally a thing of the past: it's not much more than a tourist attraction, complete with souvenir shop. "Sorry, the t-shirts are all 'small.' We're expecting more soon. But the caps are great. One size fits all."

Pastors are not supposed to have to engage in petty merchandising of this sort, and the Reverend Ernst Toller is clearly not happy about it. He's a serious man who takes his faith seriously. He reads Merton and I think I also saw Chesterton's name in the stack of books that is glimpsed briefly. Rubbing salt in the wound of his church's (and therefore his) near-irrelevance is the presence of a nearby mega-church which not only has several thousand attendees but subsidizes First Reformed, which is pretty humiliating for a 250-year-old church.

Toller is having a crisis. I started to say "crisis of faith," which it is, but it's not only that. He is deeply isolated and bears a heavy burden of personal guilt. He is also seriously ill. The crisis begins to come to a head when the wife of a troubled young man comes to him for help.

At this point, if you know Bergman's masterpiece Winter Light, you start thinking of it, and indeed there are so many important parallels between the two films that it doesn't seem possible for them to be coincidental. There is also at least one strong suggestion of Bernanos's Diary of a Country Priest.

Those comparisons, I'm sorry to say, are not really to the benefit of First Reformed. I was somewhat disappointed in its resolution. As my wife said, in the end it sort of side-steps the God question, which is not the same thing as leaving the question unanswered, as I think Winter Light does. Still, it is really, really well done, and I don't mean to damn it with faint praise. As I said, it's very much worth seeing.

(Craig Burrell seems to think more of the ending than I did.) 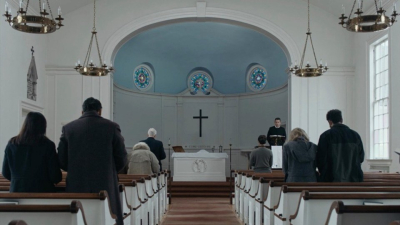 P.S. I should mention a fairly significant problem I had with the DVD (from Netflix). The film is shot in 4:3 aspect ratio. On our flat-screen TV it was displayed in whatever that standard is (16:9 I think). This resulted in that annoying horizontal stretching of the picture which seemed chronic on flat-screen TVs when they first appeared and made me wonder why people wanted them. I didn't have any way to change this on the DVD player (it's messed up, I won't bore you with the details), and it didn't occur to me till the movie was over and I had sealed the disk in its Netflix return envelope that I might have been able to change it in the TV settings. I guess it says a lot for the film that this problem didn't ruin it for me.

I'm glad to hear you enjoyed the film. As you know, I thought it was one of the better films I saw last year.

The ending will, I think, divide the audience. I think I said I 'leaned toward' a positive response, but I can certainly understand why someone might lean the opposite way. I'd like to see it again.

I've seen it suggested that the final scene is a vision, like that earlier cosmic vision. I don't think so. I didn't think the ending was terrible. I'm not sure I'd even make an aesthetic argument against it. But somehow it failed to move me. My wife's reaction was the same.

I'd like to see it again, too. I'm a little sorry that I've already sealed up the Netflix envelope. Especially as I've checked and found that I could indeed have fixed the aspect ration problem in the TV.

It is at the top of my queue, but I probably won't get to watch it until after Easter.

When you do, I'll be interested in hearing what you think.

I'm on the side of liking the ending. Powerful yet subtle movie. Ethan Hawke should have been nominated for Best Actor.

Well goodness, y'all, I'm going to have to do some cogitatin' on this one.

The beginning really did seem like a remake of Winter Light, and I am in the middle Country Priest, so that us definitely there.

I'll be interested in hearing your view. Of course I've already lost many of the details that I would need in order to say anything very specific about it.

Besides WL and DoaCP, I kept seeing resemblances to Leviathan: those hulking ships in the water, the clergyman complicit with the businessman (politician in Leviathan).

I think Leviathan crossed my mind briefly, too, but I didn't think about the clergy-businessman connection. I don't think the megachurch guy as being wicked like the bishop in Leviathan. Just too worldly.

Well, he received a donation from the businessman.

Also, there were the references to Job.

When I get a minute, I will write more and there will be spoilers if anyone hasn't seen the movie who wants to.

Now that I am on my computer instead of my phone, which doesn't happen often nowadays, I wanted to say something about the idea that the last scene is a vision. When I first read that, I immediately dismissed it, but the more I think about it, the more likely it seems.

I remember wondering why he was still pulling wires off of himself after he had already removed the vest, and taken off his shirt, and then almost immediately he was wrapping himself in the barbed wire, and I wondered, "Where the heck did that come from?"

Also, the idea that Mary would see him with blood on his chasuble and not question that is pretty implausible, as is the idea that he would embrace a pregnant woman with that barbed wire in between them.

It seems like there was something else, but now it has been several days since I thought of it and I can't remember.

I think I more or less wrote it off as "doesn't make sense." I can't remember it in that much detail now, of course. My apologies to the filmmaker if I totally missed his big statement. Though as I said earlier the fundamental problem for me was that I just didn't find it affecting.