Those cognoscenti who have been reading this blog since its earliest days may remember that back then I sometimes mentioned our two dogs, Andy and Lucy (who were not named for the Twin Peaks characters, as I had not seen the show when they were named). If I remember correctly, we also had three cats at the time. Over the years the numbers have fallen. The oldest of the cats, Jessie, died quite a few years ago, probably not long after the blog began--I've lost track of the time, but I think I mentioned the death here, though I can't find a post about it now. Another, Oreo, not too long after that, and at a comparable age, disappeared and was presumed dead. She had been showing definite signs of decline. And Milo died in 2014. I wrote about that one here. Somewhere during that time we acquired another cat, the result of a moment of weakness on my wife's part when someone offered her a beautiful snow-white kitten, but I don't think we ever had more than three at one time.

For over fifteen years dealing with those dogs has been a big part of my life. Every day began and ended with taking them out for a short walk, usually the hundred or so yards down to the bay. It got tiresome at times, but it forced me to get up and out of the house, and I witnessed many, many pleasant scenes as a result: the moon over the bay, the mysterious ambience of morning fog.

Lucy was a medium-sized mixed breed dog, 55 or 60 pounds, very nice looking with a thick red-gold coat, very sweet, but a continual problem in one way or another. She died fairly suddenly in 2015, age 15 or maybe 16, going quickly from more or less normal to more or less paralyzed in the space of a few days.

Andy was a bichon, a little fuzzy-haired dog something like a twelve-pound poodle, but more than anything like an animated teddy bear. 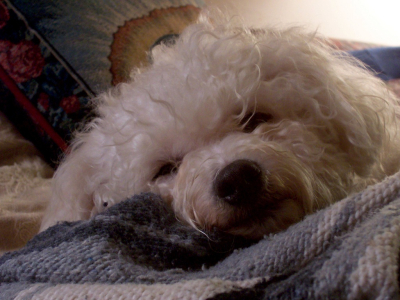 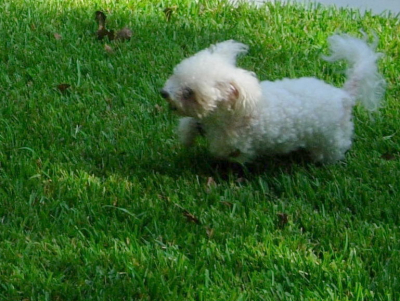 Now he's gone, too, "put down" (I hate that term but there is no good one) to spare him more of the pain he was in. He had been declining for several years, growing progressively more blind and deaf and arthritic. The twice-daily walks to the bay ended, because he didn't want to go that far. As I think I mentioned here, I began to see my treatment of him as some sort of test for me, that my treatment of him would somehow affect the way I would be treated if I suffer the same kind of long decline. Superstitious, I know, but I think I did reasonably well on the test: not perfect but not so bad.

He had always been a lot of trouble in various ways--chronic skin problems, for instance--and now he became more so, and in some not very pleasant ways. Since last summer he'd gotten progressively worse, and over the past few weeks rapidly much worse. Then last weekend he stopped eating and drinking. The vet thinks he was having kidney failure. By Monday night he was alternating between naps of an hour or two and spells of obviously pained yelping and trembling. I had hoped he would die naturally, just go to sleep and not wake up, but that wasn't happening. And so the deed was done Tuesday afternoon, and now he's buried on the hill behind the house.

I'm not a truly devoted pet lover, dogs or cats. And my wife is even less so, especially where dogs are concerned. Most of ours have come to us either because our children wanted them or in some half-accidental way. Andy was ours because of a good deed gone wrong. My wife knew someone who had bought this bichon puppy but changed her mind when he started chewing on the furniture. My wife suggested to her brother that his two young daughters might like a puppy. Yes, they would, and so the transfer was made. But one of the children proved to be allergic to him, so they didn't want to keep him. And the original owner didn't want him back. So he came to live at our house for the rest of his life.

I got pretty attached to him. He was, as I say, a lot of trouble, but he was merry and lovable. He wasn't an hysterical yapper like a lot of small dogs. He somehow managed to be the alpha dog even with much bigger dogs: with Lucy, for instance. Once when we were at the bay someone came along with two standard poodles who were at least five times his weight, but whom he bossed around as if it were the most natural thing in the world. He amused, exasperated, delighted, and comforted me. As he got past middle age and wasn't much interested in running around anymore, his favorite place was wedged between me and the arm of my favorite chair. His happy place, my wife called it. It was a pretty happy place for me, too.

His absence already makes me realize how conscious I was of his presence, and of course in recent months the need to tend to him in some way or other was always in the back of my mind. It's liberating, I won't deny. It was nice to drink my coffee this morning without feeling the need to get dressed right away and take him out. And we are now free to go away for more than a day without boarding him.

But I miss him. Now we're down to one cat, the snow-white one I mentioned. I'm pretty attached to her, too. 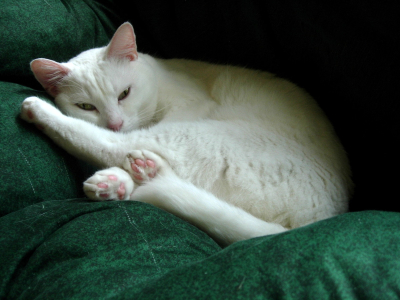 She's not young, either. She'll probably be around for several more years, at least. And then that  should be the last of pets for us.

The people next door have a bichon frise and I think of Andy every time I see it. It tried to boss me around once, but that's not going to work.

Sometimes I think I want a dog, especially since we have been inundated with vultures, but then I remember we have grandchildren in Kentucky.

Don't do it. As much as you might enjoy it, if you don't have somebody who can just come over and take care of them every day while you're gone, it's a real anchor. Andy's real decline started when we boarded him for almost two weeks last summer. It seemed to take something out of him.

I'm sorry to hear this, Mac. I didn't realize that Andy was a bichon. We had two bichons when I was growing up, and loved each of them. Ours were called Spunky and Newton. They were really good dogs -- as you say, like teddy bears, and good-tempered.

If our family ever gets a dog -- which is doubtful because there is one adult in the family who is against it -- I think I would get a bichon again. Maybe I should give one to my in-laws, in hopes of the gift being rejected?

In any case, my condolences to you once more. It's hard to lose a dog.

Thank you. I'm not exactly devastated, but it is sad. To me there's something poignant about the death of a pet, something to do with their complete vulnerability. I'm really sorry that we had to euthanize him, or felt that we did. All the logic in the world can't keep that from feeling to me like a betrayal.

There is one adult in this family who was against having a dog, too. A certain persistent child who *really* wanted a dog eventually prevailed. That dog died untimely, before Lucy and Andy--she was a car-chaser and made a fatal mistake.

I had an uncle who was a farmer and he had a beloved dog who accompanied him during his daily chores. When the dog was dying of cancer and became too ill to walk, my uncle put him on a little pillow and took him along on his chores just like always. I remember that my uncle's wife pleaded with him to have the dog put down, but I can't now recall if he finally agreed to it or not. Pretty sure he must have wrestled with that feeling of betrayal.

I can easily see me doing something like that. If Andy had not been in such obvious distress I would have kept putting off the end. Such funny things we do for our pets. I think the whole pet thing has gotten way out of hand in a lot of ways but I do sort of understand it.

I am sorry about Andy, but so excited to be one of the cognoscenti.

Aww, poor little Andy. My condolences. He looks like a sweet dog. I have a vague recollection of him.

Thank you both. It's just the way of things. But I have to admit that it's pleasant not to have to get dressed and take him out immediately upon waking. I sat around in my bathrobe way too long Saturday morning.