Light On Dark Water
Home Archives About
By Our Own Powers?
Romano Guardini: The Lord

Literally the Greatest Thing That Ever Happened

In our universe, anyway. 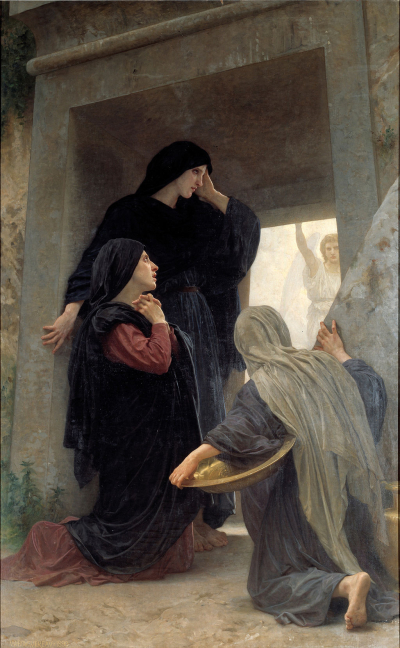 I had never seen this painting or so much as heard of the artist, William-Adolphe Bouguereau, until it was included in the Holy Week edition of Magnificat. (See this for art historian Elizabeth Lev's discussion of it.)

I like the painting in part because I've always found the story of the faithful women at the tomb particularly touching. The gospel accounts are inconsistent about their identities, except that all four include Mary Magdalene, whose story (insofar as we know and speculate) is also particularly touching.

The question is always: "Where were the disciples?" If I'd been one of them, the answer would have been "Off somewhere moping." And probably drinking.

But wherever the men were, it's strongly implied that the women were there at least partly because they wanted to prepare the body properly for burial. That is, they were going about the work that was, I assume, considered theirs, and probably a somewhat lowly task. If so, it put them in the position of being the first to learn of the most important event ever. That would constitute an excellent lesson in a principle that Jesus mentioned more than once.

Love Bouguereau's work, but haven't seen this one. Thanks!

Beautiful. Bouguereau is a new favourite of mine.

I am sure you would recognize some of his art. There are some pictures of Mary that pop up on Facebook sometimes. I really like this one. I am not sure I have seen it before.

Maybe so, though when I did a brief search for his work I didn't recognize anything. In addition to his religious subjects, he seems to have liked naked women a lot. :-)

I see this one frequently.

It does look familiar. I must have seen it too. Possibly on a Magnificat cover.