Reflection On the Minimum Required Distribution From an Annuity

I know I'm not completely stupid. There are some fairly complicated things that I understand fairly well. I made my living for roughly 40 years doing things with software that required a certain amount of intelligence. So why does my brain freeze up and refuse to process any financial information more complicated than figuring out a tip? And if any such information does go in one ear and pause and be understood for an instant, it quickly regathers its strength and flies straight out the other ear, leaving very little trace of its passage.

As my wife says about a number of things, it's weird.

It often seems to be the case in marriages that one spouse can and will and does handle the finances, while the other is incompetent and mostly oblivious. Fortunately, that is the case for me. Before we married she discovered that I had not balanced my checkbook for six months and promptly took it over. I've been content with this arrangement ever since. I've often wondered whether there is some providential psychological dynamic which generally insures a balance of that sort. God help those in marriages where both are like me, or where the incompetent one is not also oblivious but wants to be involved, and does not understand his or her limits. 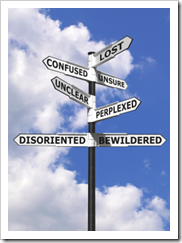 One of the first things I did for Bill was balance his checkbook. These new laws that keep you from doing your spouse's business without his permission are the bane of my existence.

If you want to really appreciate what your wife does for you, ask her to show you the form you have to fill out to figure out what percentage of your Social Security is taxable.

I don't remember her mentioning that. Maybe the guy who does our taxes took care of it. But anyway I definitely don't lack appreciation for what she does.

Perfect timing with this post. I've just gone through a minimum required distribution saga that you would not believe. Not only am I really bad at this stuff, but the customer service folks at the financial institution I dealt with hadn't a clue.

And then the IRS completely changed its filing forms ... don't get me started. Anyway, sheer torture all around. :)

I'm convinced that there are people who somehow get off on constructing these labyrinths. And/or are deliberately trying to make sure people can't function without lawyers and consultants.

I can't wait till everybody has free health care.

We have free health care, and yet our tax system is still labyrinthine! Of course, the health care is only free because we pay for it at tax-time. A neat trick.

I've become quite adept at doing our taxes. I even do them for my wife, whose self-employed status brings in a veritable fun-house of complications. We get audited every year or two, but they've not caught me in an error yet.

Goodness, that's almost...weird. Our taxes are complicated, too--I mean more than the usual. My wife did them for a long time and finally, as she put it, threw in the towel maybe ten years or so ago. And every year she says "That was the best thing I ever did." Just said it today, as a matter of fact. And I'm amazed at how little it costs, considering the amount of work involved.

I was being sarcastic about the free health care. It is about as certain as anything can be that any government-run health care system we put in place will be insanely complex. It will have features designed to provide employment for lawyers, consultants, and accountants. Though for any particular person possibly it may not be worse than dealing with insurance companies.

My husband is a financial advisor and I have an economics degree, which means I should understand these topics.