About That Letter From Those Theologians

I mean the one in which they accuse Pope Francis of heresy. I've only read the first page, at which point I scrolled down to see the list of signers. The only one I recognize is Fr. Aidan Nichols, O.P. I've read several of his books and he is certainly not any sort of crank. Or at least he hasn't been in the past. I can only conclude that either there is something to the charges, or that Fr. Nichols has made a mistake in judgment.

The first page includes the first charge: that the Pope has "publicly and pertinaciously demonstrated his belief" that

A justified person has not the strength with God’s grace to carry out the objective demands of the divine law, as though any of the commandments of God are impossible for the justified; or as meaning that God’s grace, when it produces justification in an individual, does not invariably and of its nature produce conversion from all serious sin, or is not sufficient for conversion from all serious sin.

I've heard more or less the same charge from people who are theologically educated and are not cranks. It may be justifiable. Nevertheless, I don't plan to get into the controversy any further than the preceding remarks. It's been raised in a Facebook group for the Ordinariates to which I belong, and I posted the following comment there. I guess it's partly or mainly just an occasion for me to say something I've wanted to say for some time. And I want to say it more publicly.

This is a sort of meta-comment, about why I am not going to comment on the letter: as a lay Catholic with no knowledge of theology beyond some basics, I do not consider myself qualified or entitled or obligated to call anyone a heretic on any grounds more subtle than something like denying the physical Resurrection. This is much more emphatically the case where the accused is the pope. The same basic principle applies to the signatories of this letter: I am not qualified to evaluate their arguments.

And on a personal level I have, in my going-on-40 years as a Catholic, become almost as sick of heresy-hunters as of heretics, especially of self-appointed heresy-hunters among the laity. By "heresy hunters" I mean those who are clearly looking avidly for anything that can be construed as heresy or just savoring of it. I have had a lot of reservations about Pope Francis and in particular about his governance, and have said so publicly. I had misgivings about him from the beginning, initially for nothing any more concrete than "I've got a bad feeling about this," and I think they have been somewhat justified. Somewhat. But I have deeper reservations about the anti-Francis people who seem determined to put the worst possible construction on everything he says.

The inquisitorial spirit I'm talking about is partly a somewhat (at least) understandable reaction against the toleration and even advocacy of heresy on the part of many elements of the Church, most harmfully within the hierarchy and the academic establishment. I was an enemy of what can loosely be called Modernism as soon as I understood what it was, and I still am. But the inquisitorial impulse quite clearly often has a strong taint of pride and malice. And is probably at least as great a risk to the soul of the person exercising it as the profession of doctrinal error. 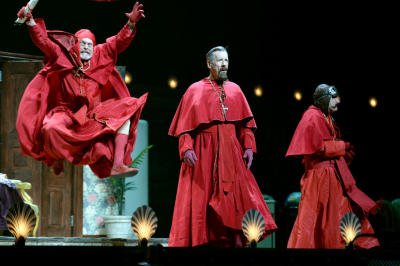 What is the internet equivalent of sticking your fingers in your ears?

I am beginning to think those three monkeys had something going for them.

Well said, Mac. I enjoy your blog, though I often see things differently. Mine is what some might call a more liberal world view, but I can appreciate where you are coming from. Your statement here is a good example of a more reasoned and circumspect stance that is refreshing in a world where reason often gives way to shouting matches with no one really listening.

Thank you. That's good to hear. I feel like I'm in danger of snarling at people for snarling at each other, and hunting for heresy of heresy-hunting. :-)

I was surprised to see Nichols' name on the list of signatories. This seems to me to be quite out of keeping with the care a theologian should take in these matters, even if one agrees with the substance, the means seems to me to be counterproductive, at least.
Here is a good commentary from Jimmy Akins. He explains why it is defective from a canon law perspective.
http://www.ncregister.com/blog/jimmy-akin/on-charging-a-pope-with-heresy

I saw some back-and-forth about Akins's piece on Facebook, but I didn't read the piece itself. Like I said I'm not going to get involved in the basic controversy. No standing, no competence. I do tend to think that it's a tactical mistake, even if the charges are valid. I can't see it having much effect beyond agitating people for a while.

I've read a couple of pieces on the letter that made the same point as this one made by Fr. Thomas Petri, who's at the Dominican House of Studies in D.C.:

Why they chose not only to include these concerns but also to veer into criticism on pro forma appointments, disciplinary measures, and liturgical vestiture as “facts” supporting their conclusion (which seems to deride the Pope’s character more than his teaching) is beyond me.

More reason to wonder why Nichols is involved.

I am reminded of the story of Noah's sons throwing a blanket over their naked a drunk father and backing out of the tent with averted eyes. Do we have to say these things "outside the family?" If I thought I saw my father sinning, I would go to him and not publish an accusatory letter. I have reservations about Pope Francis and what I see as the sowing of confusion in the flock, but he is my Father in the Faith. It seems to me that the letter in question sows only more discord.

If it isn't, that's because it isn't getting all that much attention. Or maybe I should say respect. Not as much of either as the signers presumably intended--at least as far as I've noticed, which is not all that far.

When judging the seemliness of the letter, it is well to remember that this letter is an escalation. Much the same group, as I understand, was behind the more temperate (but perhaps also badly judged) "filial correction" from three years ago. Maybe it's the wrong thing to do, and the wrong thing to say, but it hasn't come out of nowhere, and might have been dealt with more forthrightly by Church authorities at an earlier stage.

Ed Feser wrote what I think is a sensible commentary on the letter: he argues that it is ill-judged on the whole, but nonetheless makes several valid and important points, and would have been more effective if the "heresy" charge had been left out of it.

Oh, there's no doubt that Francis is responsible for the situation. Since I'm on my phone that's all I'll say for now.

I sort of wonder why they did it. I mean, surely they know that no minds were going to be changed. I guess Feser's idea that they just wanted to get into the historical record is plausible.

It isn't bringing out the best in many people. Robert mentioned Jimmy Akins's rebuttal. This morning I saw something putatively from Fr. Rutler about Akins. It was awful--horribly snide and condescending, especially toward his lack of academic qualifications. But Akins kind of asked for it by disparaging the academic qualifications of the signers. Sigh.

It occurs to me that this is all an expression of Francis's emphasis on mercy. He was grieved by the fact that theological progressives have not been in a good position to respond in kind to the charges of heresy and general heterodoxy against them. He's made it possible for them to join the fun and get a little of their own back.

Correction: "that they just wanted to get IT into the historical record." The statement, not themselves.

Sorry to hear about Fr Rutler's comments. Condescension, I fear, must be one of his besetting sins. It can be funny at times, though obviously not always.

I read Jimmy Akins' rebuttal of the letter. He made some good points, but his argument that the "heresy" charge is invalid had obvious problems and left me scratching my head. I hope somebody else gives a better argument.

It also struck me as sort of funny (in a grim way) that his attempted rebuttal of the letter relied on the making of fine distinctions and careful application of legal standards. Not very "pastoral" in the putatively Franciscan vein. Gosh, maybe legalism has its uses after all!

I don't know. It's a really dispiriting state of affairs.

My brain is conflating Dawn's last name into Edelstein.

Scrolling down through the list of web pieces at First Things, I saw this opening sentence:

"The fact that Pope Francis articulates his positions in an ambiguous manner makes it almost impossible to accuse him rightly of heresy. "

I'm not going to read the article now, maybe not at all, but that sentence probably sums up the whole thing very well. It's from Fr. Thomas Weinandy, who if I remember correctly challenged the pope a while back.

It's a contraction of Eden and Goldstein. It just appeared in my brain and won't go away. That is what I "see" when I see her name.

Oh, I see. If you'd said "names" I might have gotten it. All I could think of was Julian Edelman (a football player). Then I started trying to figure out if it was some movie or novel character we'd been discussing.