Maybe you remember that a few months ago I got excited about a track by Nan Vernon on a compilation album (see this post). It was a Cruise-Lynch-Badalamenti-sounding arrangement of an old Bobby Fuller Four song. I had never heard of her, but quickly discovered that she had released one album, Manta Ray, in the mid-1990s. It's out of print but used copies can be found on Amazon, and I immediately bought it. I see now that it can also be found, and really cheap, on Discogs.

What with one thing and another, including having been off pop music for Lent, I only recently gave it several serious listens. I can now report that while it isn't the Lynchian masterpiece I was hoping for (though not expecting), it is extremely good. Moreover, it has the seeds of greatness, and I wonder why she never made another. Manta Ray is 25 years old now. I'd like to think that she's been off doing other things, raising a family or something, becoming more wise and mature, and is going to come back with an album that fulfills the promise of this one. Not likely, I guess, but that's ok: one brilliant work is enough. 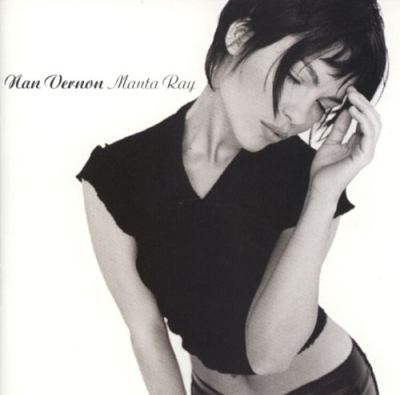 Don't think I'm being unduly swayed by the fact that the jacket photos show her as very attractive in a way that happens to push my buttons. Remember, when I was enchanted by that first track I didn't even know who was singing, much less what she looked like. She could have looked like Rumplestiltskin for all I knew. Or cared.

The first track on Manta Ray, "Motorcycle," is sort of a female Springsteen thing, a rocker with somewhat obscure road-and-romance lyrics. The more characteristic songs are slower ones like "No More Lullabies," which really make the most of her lush and powerful voice. I could swear I've heard this song somewhere else:

My impression after one hearing was that this is a very good, very well-produced mainstream sort of record. That's pretty faint praise, especially as "mainstream" coming from me is at best a neutral term, and at worst dismissive. But it kept getting better and I changed "very good" to "brilliant."

The arrangements and production are part of the appeal: there are all sorts of interesting and unconventional little touches, as you can hear in "No More Lullabies." Maybe best of all from my point of view is that as it goes on the album takes a turn toward the strange. There's a very Brecht-Weillian song in German, "Johnny's Birthday," credited only to "hollander," and with no translation of the lyric. And the last song, which is also the title song, is a surrealistic vision that puts me in mind of Kate Bush. I'm not the only one who's had that thought. In looking around for information about Nan Vernon on the web (there's not a whole lot), I ran across this comment:

If she had gone the direction of the song "Manta Ray" I think she'd be up there among the goddesses*. As it is, she's an extrememly worthy apostle.

I don't know Happy Rhodes but other than that, yes indeed.

Her recorded work since this album seems to consist entirely of one-off covers, like the one I first heard. You can find some of them on YouTube. She should do a whole album of those, maybe more than one. I would, as the kids say, totally buy that. I've always thought it one of the weaknesses of post-1965 pop music that artists generally want to write all their own material. I understand there are financial reasons for that, but too many of them aren't that good at that part of it.

I put the CD in my amazon cart but I won't hit buy now till Im back from Spain.

I'll of course be interested in hearing your reaction.

Hoping to give it a listen over the weekend.

I've had "Motorcycle" stuck in my head since I woke up this morning. Don't know why because it's several days since I heard it.

I bought this record and listen to it in the car. Its OK, except for the at that time required Track 10 which is just noises. You can see things have progressed or got worse since the days when this record was produced but one sign of progress seems to be forgetfulness of the exigence for Track 10.

I don't know if musicians forgot the exigence or they mothballed it, but I'd count it as a Good Thing and progress

Hmm, I don't remember that. If I can find the cd I'll check it out. I may well have liked it. I'm thinking I may have over-praised this album because I liked some of it so much.

Oh my goodness. Track 10 is "Fisherman," one of the Kate-worthy tracks.

I don't even think it's all that weird. It does have some weird sounds in the background. You are talking about the track called "Fisherman," right? Well, personal taste and all that.

ON MY CD PLAYER IN THE CAR IT IS TRACK 10. IT SOUNDS TO ME LIKE ALL WEIRD NOISES.

Grumpy, I put this on the shoegaze thread but don't know if you saw it.

Got the new Long Beard album yesterday (Means to Me) and it's very good. I especially like the song "Snow Globe." The first half is better than the second half imo, but it's still pretty enjoyable. I imagine it will grow on me like the first one did.

Listened to Fisherman again and its ahem experimental

That I agree with.

It was all a misunderstanding. I stuff all the CDs I want to listen to into the door pockets of the car. I always take new CDs and put them straight into the car doors. I bought Mazzy Star and Manta Ray at the same time, when I got back from the camino. I checked on the slip cover to see that track 10 was the Fisherman, but I didn't open the slip cover - in which case I would have seen that the CD was sitting in inside, and was not in the CD player. Today I took the CD out and discovered that when I tried to put it away. Its not the Ray CD. Its Mazzy Star.

Track 10 on Mazzy Star has a lot of tambourines not to mention cowbells, and sounds vaguely reminiscent of 'All Tomorrow's Parties.'

I listened to the real Fisherman just to celebrate, and its striking that, unlike the other one, it actually mentions a fisherman.

This is what comes of being brainy.