The AllMusic.com review describes this album as "a bona-fide lost classic." I don't think that's really true, not because it isn't a classic, but because it's no longer lost. It was released in 1968 and sales were negligible. It was eventually discovered, or rediscovered, years too late to benefit the artists very much. It deserved a bigger audience than it is likely ever to have, and still does, but at least it has been acknowledged by a lot of critics and fans. 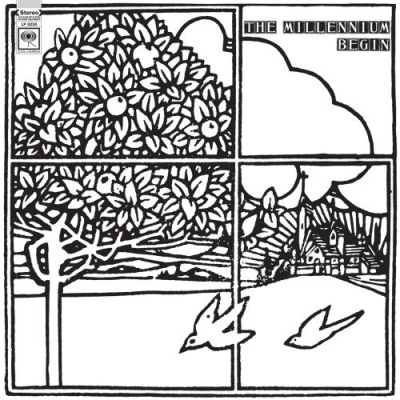 I think I will let Wikipedia do the work of reporting the facts about the group, which seems to have been basically a studio entity, and the recording of what turned out to be their only album: you can read all about it here. You can find out more about the album, the group, and the person who was one of the masterminds of the effort, Curt Boettcher, in Dawn Eden Goldstein's memoir. More than the facts, though, you will find out about the profound effect the album had on her, and where her interest took her. She is one of two people I know who were greatly affected by it. (The other is a friend who concurred in Dawn's recommendation of it years ago on her blog.)

I finally bought it a few years ago, listened to it once or twice, and thought "Yeah, that's nice, not really my cup of tea but I can see why people like it." A few weeks ago, because I was about to read Dawn's memoir, I listened to it on a long car trip and began to get the reasons for the enthusiasm. Another hearing at home confirmed it: yes, it is actually extremely good, worthy of being compared to anything else of its time; yes, including the Beatles. Actually it's better than much of the Beatles' work from their last two albums. I guess it's a little on the light side for me to apply the word "great" to it, but it certainly belongs up there with far better-known music.

The AllMusic review describes it as a combination of "hard rock, breezy ballads, and psychedelia." I'd use a different set of labels. There's not a lot of what anyone today would consider to be hard rock on it. And if the term in 1968 meant, say, Jimi Hendrix or Cream or Steppenwolf or Iron Butterfly, or the Beatles in a track like "Helter Skelter," there wasn't much at the time. How about "sunshine pop and psychedelia"?

The former term in particular is rather vague, but think of The Association or The Mamas And Papas, or maybe even (don't laugh) The Monkees: bright tunes, complex vocals and arrangements, cheerful optimistic lyrics. Like those, but even more so, this music is all about the tunes and the vocals. The instruments are used brilliantly, with great care and precision, but are generally not in the foreground. Nobody is jamming here. There must have been several really good vocalists in the group (think of The Assocation again), even considering how much multi-tracking is present.  The whole thing is very tightly arranged and produced, like the Beatles' later studio work.

Interestingly, the album begins more in the sunshine vein, and tends a little darker (just a little) and more psychedelic as it goes on. And it ends with a track (not a song), "Anthem (Begin)," which is just flat-out abstract, comparable to The Beatles' "Revolution #9" (but mercifully much shorter). I'd call it a misstep, really, though I have no doubt that Boettcher and Co. had what seemed to them very good reasons for doing it: some kind of statement about the opening of possibilities, maybe. But I'd rather the album ended with the beautiful and brilliant "There Is Nothing More to Say."

That title might make you think that the song is some kind of bitter statement, maybe about the end of a love affair. But it's in the vein of several others on the album which overflow with very 1960s sentiments: a better world is coming, open up, let go, be  yourself, and so forth.

To which many of us who were there and have seen how things turned out respond "Yeah, right." But never mind that: the sense of hope is poignant and sweet, even if it is a bit cloying at times, and it's apparent all through the album.

Dawn heard Begin twenty years after it was released, which if I'm not mistaken, was the year she was born. In other words she heard it when she was around twenty. As it happens, that was my age in 1968. I wonder what I would have thought of the album if I'd heard it then. Would it have hit me in somewhat the same way it did her? My guess is that I wouldn't have really taken to it; I would have thought it a little twee, though I didn't have that word--too sweet, too close to fluffy, for my taste at the time. Though I might have loved it at a few years earlier, at the age fifteen or sixteen, when I was enthusiastic about Simon and Garfunkel's Sounds of Silence.

And I wonder why it didn't sell. It was somewhat out of step with its times, but not all that much. The hippies were into harder stuff in 1968, but they were a minority of the record-buying public. It wasn't long after the release of Begin that the 5th Dimension's slick productions lightly flavored with flower power were huge hits. I wonder--this is going to sound silly--if the cover was a factor. It's a nice picture, but not striking. A little dull, actually, if you ask me. If I saw it in the stores at the time, which I don't remember doing, I probably didn't think it looked interesting.

Or maybe it just fell between two stools, too sweet for the hippies, too complex for the mainstream. Or maybe it had to do with their not being a live band, thus having no legend of great performances and enthusiastic crowds. Or maybe the record company just didn't do a good job of getting the word out.

Well, whatever the reason, it's a sad story in many ways. None of the participants ever had much success as performers, though a couple did well as producers. But at least we can be glad that this brilliant work wasn't truly lost.

:-) Yeah, looks like it was made for that. That kind of indicates my problem--it seems incomplete or insufficient. It's not just monochrome, it's purely black and white.

I listened to it on amazon music. Its intriguing

I meant to say that it might seem dated. Or sort of...kid stuff. It's pretty naive in a way that's very much of its time.

I changed your comment name from your real name btw. Your browser has remembered the real name from some previous comment, not necessarily here.

how odd. I looked at it and it said 'Grumpy as ever' and I added my email address.

Ah. now I see. when I add my email address it is changing my name.

Very interesting album. A couple of the tracks actually sound quite "modern."

"maybe the record company just didn't do a good job of getting the word out."

There's a comment on YouTube to that effect by one of the former members. It's pretty striking how many times something like that happens -- really good artists/bands fall through the cracks or what have you because of record company neglect or other problems.

Started re-watching Breaking Bad. Its so funny in the first few episodes. I just forgot how funny Jesse Pinkman is at the start, partly because of his great pathos at the end.

Funny you should mention that right now, because I've said since I watched the last episode that I would probably never watch it again. But just a day or two ago I was thinking "Well, maybe the early episodes, because they're funny and fascinating."

Rob, just yesterday I became aware of a Facebook group devoted to Curt Boettcher's. A couple of the members of Millenium participate there and it's fascinating to hear their comments. And yes, that does happen all too often.

Since Begin was reportedly the most expensive album Columbia had ever produced at the time, you'd think they'd have thrown a lot into promoting it. How is it that in a small Alabama town I knew of the Velvet Underground in 1967 but not The Millennium in 1968? Of course that has something to do with the crowd I was part of.

Mac ran with a bad crowd...