I've often wondered, when listening to or reading someone who seems to be a really hardened anti-Christian, what it would take to crack that shell. I say "seems" because of course one can never tell from the outside what's going on inside a person. And I say "anti-Christian" rather than "anti-religious" or "anti-theist" because for cultural reasons hostility to theistic religion is in the Western world most often, most explicitly, and most vigorously hostility to Christianity.

This is not the simple skepticism which has been ascendant in Western culture for a couple of centuries. It's hostility, an engagement of the emotions as much as or more than the intellect, because Christianity is a significant obstacle to what is generally viewed as progress toward liberation, especially sexual liberation.

If I had met Sally Read fifteen or so years ago I might have thought she was just such a person, and wondered about her in just this way. And yet here is this excellent little book (147 pages) which tells just such a story of the breaking of a shell of resistance. Her father was a fairly militant atheist, and from early in life she followed in his intellectual footsteps. In the book she doesn't explicitly go into the question of feminism as such (as far as I recall), but it seems implied in her general outlook, though perhaps not in a fervently ideological way. And feminism is generally hostile, often extremely hostile, to Christianity. (Yes, I know there is such a thing as Christian feminism. I think it's a pretty uneasy and unstable mix, though, in the long run turning into the one thing or the other. Feminism as a complete theory of humanity is simply not compatible with Christianity.)

Fundamental to her view of the world was something pretty close to contempt for all religion, especially for Christianity, and most especially for the Catholic Church, which she saw as more or less insane. But you can see that the seeds of faith were there. To start with, there is her father's commitment to atheism as truth. However mistaken in its immediate object, commitment to truth is always commitment to God.

And there are those deep movements of the soul which are often obscure even to ourselves. When she finds herself "sitting on the floor of [her] flat in Belsize Park and saying lucidly, "This is hell. I'm in hell," she resists the impulse to reach toward God: "I thought I could never lower myself to that degree of self-delusion." But having the impulse to reach is itself an implicit reaching.

Later on, in a conversation with a friend who confesses to believing in God, she makes

...my nonconfession, and it was a courageous bleakness I felt. I knew there was no God above. It was as if I had looked into an empty dish and simply declared it to be empty.

But she doesn't want this to be true, and that not-wanting is also a way of reaching.

And there is the cunning of providence. She plans to write a book called The Vagina: An Owner's Handbook. And in this book she wants to write about the experiences of absolutely every kind of woman, including nuns--she is living in Italy--but she is unsure of how to approach one, and doesn't want to "spook" those who run the preschool her daughter attends.

The only other link I had with the Catholic Church was tenuous--a friend of friends, a Canadian Byzantine-rite priest. He was about my age, with black, merry eyes, and seemed approachable. Perhaps he could introduce me to a nun. One day, ticking off chores on my work list, I fired off an email:

Dear Father, I'm writing a book about the vagina.

So begins a crucial relationship in which, by email and over coffee, she beats Fr. Gregory with every rhetorical club she can lay her hands on. And apparently he sometimes hit back. She describes the weeks that followed as a fight, and it clearly was, and not only with Fr. Gregory.

And then there are the experiences, the direct contacts with the divine. This is where things get really puzzling, where I wonder why her? Why, of all the scornful non-believers in the world, does God come to her, and not to so many others who seem very much like her? Sure, her inner movement and her circumstances prepared her, but that doesn't answer the question, only moves it back a few steps.

Conversion stories are all similar in many ways, and yet they remain interesting, because that complex interweaving of the personal and the circumstantial and the divine is different in each one. Demographic and sociological categories are irrelevant to God's relationship with any individual. I read this book shortly after reading Dawn Eden Goldstein's (see this post and this one). In one broad respect at least they are quite similar, in that both women are in many ways fairly typical of the sort of person who does not convert, who does not come anywhere near it. And yet here they are. For that matter, here I am, part of a tiny, tiny minority among those who would have seemed, ca. 1970, very much like me. Why me?

That skeptical and often hostile modern mind that I mentioned earlier has for some time been expecting and predicting the death of  Christianity and especially of the Catholic Church. I've heard more than one person in recent years assert with confidence that "the Catholic Church is dying." Setting aside the divine promises which non-Christians naturally do not believe exist, speaking only in human terms, that death is unlikely in the extreme. There will always be people for whom a life of maximizing pleasure and minimizing pain, whether or not successful in those efforts, will not be enough. It's the way the human person is made. Why is that, I wonder?

I haven't told anything like the whole story here, so don't get the impression that you know the book from reading this notice. It's really very good. I was flipping through it a little while ago and thinking I'd have liked for it to be somewhat longer. I don't think that about many books. 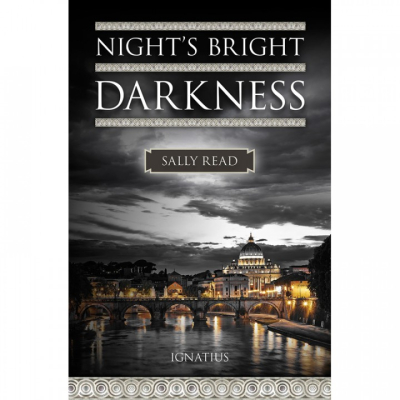 "This is where the things get really puzzling, where I wonder why her? Why, of all the scornful non-believers in the world, does God come to her, and not to so many others who seem very much like her?"

Don't you think the answer to this question is that even though they are outwardly "scornful non-believers" inwardly they are very much seeking?

I don't think I was scornful, but certainly an adult agnostic for many years before I finally took the plunge and converted to Catholicism 12+ years ago. If you are not seeking, chances are you will not find. I tell the atheist friends I have that make comments I find upsetting that you (they) cannot expect to find God unless your practices are designed to lead you to him.

Yes that's true (inwardly seeking) but in many cases, like this one, the person is not conscious of it. In that respect inner and outer were the same. At most she thought it might be nice to believe in God but thought the question was settled. I may have given the impression that her misery pushed her but actually she was at a much happier point in her life when God really started knocking on the door.

When we chose this book for our book club about a year and a half ago, I was not too pleased because, while I read lots of conversion stories at one point, I am a bit tired of them. This book, however, is not at all like the typical recitation of the list of theological problems overcome by the convert. When you finish the book, you really have no idea what she thinks about any Church teaching, etc. You really don't understand how it even happened. She just came to believe.

It's a very beautiful book.

If I were going to buy the book she was originally writing (which I wouldn't), I would have to order it online, because there's no way I could face a cashier with a book with that title in hand.

And if a man were going to write the male equivalent it would just be a bunch of crude jokes. I think somebody did that with The Vagina Monologues.

And about Sally Read: the key is her realization that the faith is a poem. We can probably assume that a lot of her intellectual objections were at least partly defanged by Fr Gregory, even though she doesn't go into the specifics. But that one big realization seems to have sort of put the other stuff in its place.

"faith is a poem." If we could only communicate this to the world. One of the problems in our day is lack of a poetic sense. I've proposed teaching poetry to seminarians precisely for this reason.

Funny that this thread opened up again right now because I just late last night finished reading the book and thought I must come here today and read again what you'd written about it.

What did you think of it?

I read the book through in just two sittings, mostly going for the story line. I've just started reading it all over again and I'm struck by its deep honesty; maybe not the right word, more like truth, I think. Not sure I agree that she truly had a deep-seated hostility toward faith. Reading of her nursing experience made me think that she always had a sense, however faint, that God was there. Anyway, a very fine book.

The seed was there all right, but what I'm getting at is that not only would other people probably not have seen it in her, she herself wasn't conscious of it. Not in the sense of being consciously open to it. At least not any more than any other person, because that seed is there in most (all?).