Sohrab Ahmari: Through Fire By Water

I'm really trying not to say "Here's yet another conversion story." Every soul is unique, every soul's relationship with God is unique, every conversion story is unique (as is every story of a soul who doesn't have to be converted, in the sense of adopting a new religion). Yet there is also a certain degree of similarity in all these stories, and it's probably a good idea not to read too many of them in quick succession.

Here's what is unusual about Sohrab Ahmari's story: he was born in Iran, to a not-particularly-observant Muslim family, after the Islamic revolution had, to the distress of his family, taken power.  He and his mother came to the U.S., and not just to urban or typical suburban U.S., but to Mormon Utah. There he had a very American adolescence which involved rejection of the mainstream (as it existed there), subsequent atheism, nihilism, communism, and other forms of modern Western alienation. As happens fairly often, actual experience led him away from cultural and political leftism in general toward the kind of conservatism that respects religion--which in this country means above all respecting Christianity--without believing in it or practicing it. a species of conservatism. That "actual experience" provides some of the most interesting moments in the book, including his covertly joining a group of young men attempting to emigrate from the Middle East to Europe.

I think I will leave the rest of the story for you to read. It is worth reading. 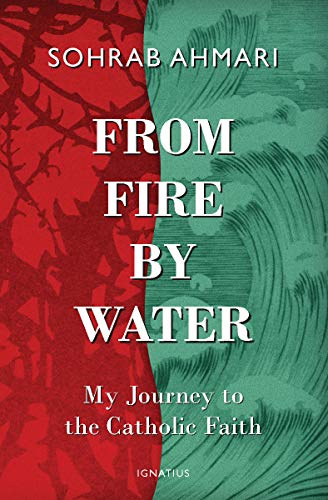 Okay, I know that sounds like faint praise, and I guess it is. I enjoyed the book but I don't expect to return to it, and my relative lack of enthusiasm is similar to what I felt about Hillbilly Elegy: while the matter is certainly interesting, the quality of the writing is not high enough to make me value it for that reason.

Ahmari has of course been in the news, at least in certain circles, because of his call, in First Things, for a more aggressive Christian tactic in the current religious conflict. Ahmari criticizes a different approach, to which he appropriated the name of one of its practitioners, calling it "David-French-ism." I don't feel obliged to take a side in this argument, or even inclined to.  As I said in a comment just this morning, the fact that the liberal democratic tradition has a fatal philosophical flaw does not mean that it must actually die very soon, and I see no reason why I myself need to take any definite view on whether I think the case is hopeless or not. At any rate I think French has a very good point, on display in this piece about a difficult but successful religious liberty lawsuit, that too many Christians and conservatives are much too quick to give up the fight even on the terms required by the liberal tradition itself. To that extent, then, my view differs from Ahmari's, that the "...the overall balance of forces has tilted inexorably away from us."

I don't think anyone has ever accused me of optimism, and if anyone did he was mistaken or taking some anomaly for the norm. But I don't quite accept "inexorably."

I thought this book was worth reading, and he had a different point-of-view from anyone else I have read, although it isn't a typical Muslim point-of-view. I agree that it wasn't particularly well-written. That surprised me from someone who makes his living as a writer.

I haven't read that FT article, or anything else he has written. I had never heard of him before. Life in my bubble.

I can't remember whether I heard of him first in connection with this book or with his journalism. Fairly close in time, anyway. Definitely not a typical Muslim point of view! It was interesting to encounter a Muslim kid with more or less the same cynical view of Islam and Islamic authority that a typical American teenager might have of Christianity and, say, the religious right.

Very good David French piece. I really had no idea of this kind of thing happening:

In spite of the fact that there was a vibrant Christian and conservative presence on campus, Ruth and Orit fought largely alone. In fact, one large campus ministry was angry at them for defending the Constitution, claiming it was making their life more difficult on campus. I had to fly to meet the general counsel of a major campus ministry to justify my decision to fight for the Constitution. I met with tenured Christian faculty and urged them to stand with Ruth and Orit, and while some offered (appreciated) private support, the public silence was deafening . . . and shameful.
...
The Tech case was extraordinary, but the cowardice — or sometimes outright opposition — of allies was typical. In my very first campus case, a brave Christian group challenged Rutgers University after it tossed the group off campus for upholding a rule requiring that its leaders adhere to the group’s statement of faith. The very first opposition to the case came from — you guessed it — other Christians. They berated one of the group leaders so badly that I’ll never forget our late-night conversation as she wept at the pain and betrayal. But she persevered, and she won.

I was somewhat surprised by that, too. Not entirely, but somewhat. One thing I take from it is more evidence for something I've remarked on before: progressivism is now far more morally confident than orthodox Christianity. In matters related to sex especially, they *know* they are right. Whereas Christians tend to feel a little (or a lot) guilty and diffident.

I'd been curious about this book, wondering if I should make time to read it. The brouhaha over David French-ism inclined me gently away, and your thoughts push a little further in the same direction (although Janet pushes back, so maybe it's a wash).

I will say that seeing thoughtful converts to the faith in these trying times is encouraging. I admire the courage of those who do this in the public eye in inauspicious circumstances.

Yes, it is extremely encouraging. I think there will always be such, though they may become more rare.

By the way, I think Janet and I are more or less in agreement. I did say "worth reading", as she did, though maybe that was obscured by the un-enthusiasm in which it was embedded.

Ha. I was thinking the same thing. The two things I said were in your post.

It was the cultural aspects--more or less secular Muslims--that I found most interesting.

I also think it is somewhat telling that he practices a really traditional form of Catholicism.

Not unusual for converts, as you know. Have you seen that Facebook page "Susan From the Parish Council"? Mocks elderly progressive Catholics. It's inconsistent but funny sometimes.

In real life there is a super-prog parish somewhere in which white progressives are fighting a more traditionalist African priest. That's had a couple of genuinely funny moments. Such as when they sang "We Shall Overcome" at him. Unless I'm thinking of a Babylon Bee post....