Light On Dark Water
Home Archives About
The Issues Are Not the Issues Anymore
Le Spleen de Samsung?*

I'm not that much of a fan and would probably not have bothered on my own, but I thought my wife would enjoy it, and anyway I'd sort of been wanting to see a movie in a theater. I enjoyed it, with my usual reservations about its soap-opera-ness etc. Suffice to say that they did a good job of creating a lavish two-hour episode of the series; that is to say, if you like the series you'll surely like the movie.

But what really struck me, and the reason I'm writing this post, was that it is in at least one respect deeply counter-cultural. I mean its approval of, its positively reveling in, hierarchy. I know its the opulence and the romance that draw in its audience, which I think is predominantly female. And I know it paints an unrealistic picture of the life of a wealthy English family and their servants. So I'm pretty sure that the mutual regard of upper and lower classes--the loyalty and devotion of the servants, the kindness and concern of the masters--is at least somewhat exaggerated and sentimentalized (though I hope not entirely without foundation in fact). It's very prominent in this film, and important to the plot. The fact that this picture is apparently very attractive to a lot of people seems significant.

I think we all in our deepest hearts believe things should be this way, though it flies in the face of many of the attitudes and presuppositions of our culture (not to mention the actual injustices it so often involves in the real fallen world). And that's because, cosmically, that's the way things actually are. 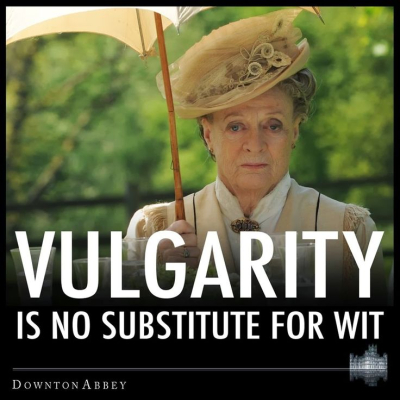 Another counter-cultural sentiment. And yes it's probably vulgar of me to post this.

With respect, this is just like that time Ross Douthat claimed that everyone really loved Game of Thrones because they wanted a monarch, and their affinity for all the sex and violence was really a cover for this deeper desire. (https://twitter.com/DouthatNYT/status/885152603180498944)

Of course, everyone loves to fantasize about having enough money to never have to work again, having a huge house in the untrammeled countryside and lots of nice things. That’s what appeals to people, not the hierarchy. The romantic appeal of Downton Abbey is really no different than that of “Friends”, where the average worker has a huge apartment in the city and an embarrassingly high amount of spare time to hang out with pals at the local coffee shop. People dream of breaking out of the grind and having time and leisure to socialize, actually develop their aptitudes, and work on interesting problems. They don’t dream of being subservient to kind masters. (I mean, there’s a sliver-demographic of Catholics that do, and they have a habit of projecting it onto everyone else.)

Oh, I didn't at all intend to say that this is *why* people like the show so much (some people). Like I said, it's the opulence and romance (i.e. soap-opera element) that are the big draws. But this element is there, and people do seem to like it. Have you seen the movie? It's a major element in the plot. I'm pretty sure Julian Fellowes et al know what their audience likes, and I think it's interesting and significant that this is part of their toolkit. In principle it goes very much against the democratic grain, unlike, say, the Friends fantasy.

I haven’t seen the movie, but I watched the first three seasons of the show.

Ok, I see it now. I'm not seeing anything nearly as sweeping as Douthat. I.e. not "you like it because..."

But clearly there is a deep appeal to the idea of royalty. Look how extensive it is in fantasy. Not to mention showing up in our tendency to the tendency I've often criticized, of people looking to individual politicians as philosopher-kings who will put things right.

Not just to royalty, but to hierarchy. It always strikes me as interesting and sorta funny to see it grafted onto sci-fi, as in Star Wars. Though there it tends to be more military than regal.

Oops, I meant to say I’m not *saying* anything as sweeping as Douthat.

We recently started watching the series from the beginning. We stopped after Matthew died. I don't know how far we will get this time.

Last night, I saw a picture of the actress who plays Mrs. Hudson with her own hair. I was distressed.

I saw her in some not-so-great sci-fi thing several years ago. She was playing a military officer of some kind. I also was distressed.

Is Matthew the one who wrecked his car? That was one of the points where I really got sort of disgusted with the series. But I'm sure it's tough on the writers when an actor decides to quit. Cf. the X-Files.

Yes, there's a scene where Mary is in bed after having a baby and they are talking about how happy they are and how wonderful their life is--very schlocky--and it was just too much for me.

I'm actually not totally sure whether you mean it was too sad, in spite of being schlocky, or just plain too schlocky.

You probably know this Oscar Wilde line but in case you don't: "He must have a heart of stone who can read of the death of Little Nell without laughing aloud." That's pretty awful but it made me laugh the first time I heard it.

Do you mean Mrs. Hughes? Mrs. Hudson is the landlady in Sherlock Holmes.

Anyway, the actress who plays Mrs. Hughes is Phyllis Logan, and I've seen her in lots of British TV dramas. She always does a fine job, I think.

I can't see how anyone could possibly object to being part of a hierarchy that functioned fairly and humanely. Of course the trouble is that they will always tend not to, but that in most endeavours some sort of hierarchy is necessary for anything effective to get done.

I think most people would in fact agree with that. But they would tend to think of it as a disagreeable necessity. What's so striking to me about its place in the Downton movie is that it seems to be treated as a basically good thing. Everybody from His Lordship on down is a member of Team Downton.

I guess it's possible that even the Downton fans are going away from the movie grumbling about that aspect of it. But my impression was that it's accepted as a portrayal of the way things *ought* to be, even if we all know they are not.