Here's a good assessment from Joanna Bogle at the Catholic Herald. Good, but in my opinion a bit more rosy than is warranted. And I'd say the headline is definitely too rosy:

It hasn’t been easy. But ten years on, the ordinariate is a success story.

I won't say the text contradicts that, but it certainly qualifies it. (And most likely the author did not write it.) Joanna Bogle is British and is writing mainly of the UK. Here she describes the phenomenon that apparently surprised a lot of people who thought that the development would be enthusiastically welcomed and that significant numbers of Anglicans would "come over":

A meeting of Forward in Faith, a network of orthodox Anglicans and the leading organisation on the scene, was quickly summoned. And that was when disappointment set in. The reaction of many was not what had been expected.

“We couldn’t believe it,” the ordinariate member recalls. “Speaker after speaker rose to say, ‘Oh, I don’t know … I don’t think this is for me,’ or words to that effect. Where some of us had assumed a general rejoicing and some practical plans on how to go ahead, there was just a flatness, a sort of bland rejection without any real reasons given.”

More or less the same kind of thing happened here. I was not altogether surprised, as I thought the number of interested Episcopalians and "Continuing Anglicans" was relatively small. It's not as if the heterodox drift (to put it mildly) of the Episcopal Church was a new thing. It was obvious and obviously well under way when I converted in 1981. Most people who were truly unhappy with those developments left years ago. As someone I know put it, "that pond is fished out."

And some big proportion of the Continuing folks seem to be very definitely Protestant. Or, if they think of themselves as Anglo-Catholic, are pretty well committed to the idea that they don't need to be in communion with Rome because they're already Catholic. Scratch these folks, and you'll usually get a distinct whiff of old-fashioned British disdain for "the Roman church." I suspect something of that is behind the "bland rejection without any real reasons" which Bogle describes.

I don't follow these things very closely, but I'm told by those who do that the U.S. Ordinariate is doing better. Our local group, the Society of St. Gregory the Great, is hanging in there, not growing much but not in immediate danger of death, either. And the Ordinariate's cathedral, Our Lady of Walsingham in Houston, seems to be thriving. I was there a month or so ago and it was a pretty impressive experience. I had meant to do a blog post about it but haven't gotten around to it. There's more to the Walsingham story than Anglicanorum Coetibus, though: it came into being under John Paul II's Pastoral Provision in the early '80s, so it has relatively old and deep roots now.

As I see it, AC was about thirty years late. It is what the Pastoral Provision should have been; the PP was far more limited in scope than the Ordinariates. (See this for what the PP effected.) I think more Anglicans in this country would have come over if something like the Ordinariate had existed then. I almost said "too late," but that implies a hopeless situation. In this case "never too late" and "better late than never" apply. I think of us as nurturing a small and slow-growing plant which may grow into a great tree long after I'm gone. Maybe it will, maybe it won't, but it certainly won't if we don't keep it alive now.

Thank you and God bless you, Benedict XVI. 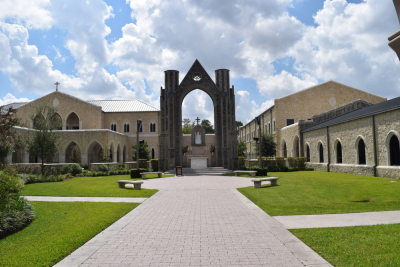 Shrine of Our Lady of Walsingham at the Cathedral in Houston

I was hoping for them to do something like that in the 1980s. By the time they did it, it was as you say too late. Too late for the Anglicans and also, infinitely less important, too late for me. I couldnt go back to Anglican type services by then - I had not seen a BCP in decades.

Im quite sure anti Catholic snobbery is part of the reason for remaining. Most high church Anglicans are infected with it.

Interesting thing at our Mass this morning: someone was there who is new to the area and whose "native" liturgy is the Armenian rite, or whatever the proper term is. Probably a lot closer to Orthodox liturgy than to the Novus Ordo. She said she liked our liturgy better than that of most of the parishes in the area because "they seem very Protestant." Which was funny for several reasons, not least because we are in fact ex-Protestants with a liturgy brought from our Protestant communion. Or at least liturgical language. The liturgy itself of course can hardly be attributed to Anglicanism, since it was carried over or revived from the pre-Protestant one. In fact it's been described as the Tridentine Mass in English.

I've been to a Byzantine liturgy once. It was impressive but I don't think I could ever feel at home with it. At least in the way I do with the Ordinariate's English one. I didn't grow up with the BCP but I got some of it as a Methodist, and it seems to suit my British-Isles-bred genes.

Alan Jacobs has a history of the BCP which ends on a rather sad note--that there can no longer be anything close to a single BCP, even if there were no liturgical/theological/linguistic disagreements, because Anglicanism is too diversified. I suppose that's a good problem to have in a way.

Ive been to a few Byzantine liturgies. Byzantine Catholic is not exactly like that, tho similar

Byzantine Catholic was what it was, actually. It was a long time ago and I don’t remember it very clearly.