I mentioned the other day that I haven't really used my Criterion Channel subscription very much. I'm thinking of dropping it. But I did recently make use of it to watch Antonioni's three early '60s films that are considered a trilogy: L'Avventura, La Notte, L'Eclisse (The Adventure, The Night, The Eclipse).

I last saw them in 2007...hard to believe it's been twelve years ago. I was not as impressed as I hoped to be. I only know the year because I wrote about L'Avventura (here) and L'Eclisse (here). Of the first I said:

According to the critical commentary on the DVD, the title refers to the adventure of self-discovery, or something. Whatever. If you want to call it a nearly plotless portrait of some unappealing rich people, with unavoidable implications about The Emptiness of Modern Life and The Difficulty of Really Communicating With Another Person, that’s ok with me. It’s beautiful and evocative. The camera can’t stay away from Monica Vitti’s strikingly soulful face, and the contrast between what one sees there and the lives these people lead is unforgettable, even if I’m unconvinced that the philosophical depth claimed for the film is really there.

I'm a little sorry to say that my opinion hasn't changed very much. I did enjoy them, at least those two--La Notte is definitely my least favorite of the bunch. I remain unconvinced that they are as profound as many critics say. I don't think they compare with Bergman, for instance. When the dust settles, what I like most about them is certain purely visual moments. But I like those a lot.

To be fair, there may be something being said without words or actions that I just didn't get, not being very visually astute or even observant. I watched one relatively brief critical commentary, also on Criterion Channel, and the critic (whose name I didn't recognize and don't remember) "read" the opening scene of L'Eclisse as a series of visual statements. It seemed entirely plausible and added a good deal of subtle information to the portrait of the two people depicted.

I didn't go back and read those two blog posts until after I'd seen all three this time around. Back then I had said this about L'Eclisse:

The section from the moment Vittoria walks out of the building until the end of the film might be the most haunting ten minutes or so of cinema I've ever experienced. Late last night, about to put the disk into its envelope for return to Netflix, I wanted to see it one last time and ended up watching it three times in a row. I think I could have sat there for an hour or more watching those ten minutes over and over again.

It's just a series of shots of mostly empty urban spaces moving from daylight to darkness. There's no way I could describe it in any way that would communicate the effect, and I can't even expect that anyone else would have this reaction.

I didn't remember that I'd said that, so I smiled when I read it, because this time I had very much the same reaction to that last ten minutes, except that this time I only watched it twice. 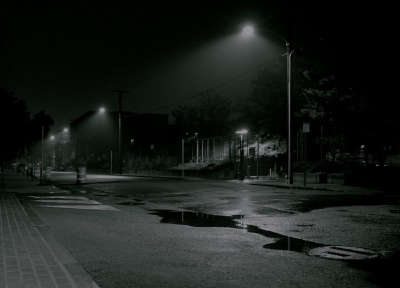 On about my last day in NYC in 2016 a taxi driver urged me to watch the films of Antononioni. I tried one but I couldnt get through it.

If you’re not drawn in by the visual appeal you won’t be surprised drawn in at all.