"Walking Like Agag"; Ngaio Marsh; Death of a Peer (Surfeit of Lampreys)

Let me explain that odd subject line. This post exists for one reason: to make search engines come up with a quick and definite answer for anyone who encounters the phrase "walking like Agag" in the Ngaio Marsh novel Death of a Peer, which was originally (and better) titled A Surfeit of Lampreys, and turns to the internet for an explanation. It took me a while to find one.

Here is the context in which the phrase appears:

At their first meeting Dr. Kantripp had warned Alleyn that Lady Wutherwood was greatly shaken. "I suppose she is," Alleyn had said; "one expects that, but you mean something else, don't you?" And Kantripp, looking guarded, muttered about hysteria, possible momentary derangement, extreme and morbid depression. "In other words, a bit dotty," Alleyn grunted. "Curtis had better have a look at her, if you don't mine." He left the doctors together and afterwards accepted Dr. Curtis' view that Kantripp was walking like Agag....

The reference is to 1 Sam 15:32. In the King James version, which is almost certainly what Inspector Alleyn would have known, it goes like this:

Then said Samuel, Bring ye hither to me Agag the king of the Amal'ekites. And Agag came unto him delicately. And Agag said, Surely the bitterness of death is past.

So Alleyn means something akin to "walking on tiptoe," or maybe "walking on eggshells" when those are used metaphorically in reference to someone's conversation: speaking carefully, in short. Dr. Kantripp is not saying outright, but strongly suggesting, that Lady Wutherwood is in fact a bit dotty.

Apparently that translation is now considered inaccurate, at least by some translators. Here's how it goes in the New American Bible:

Afterward Samuel commanded, “Bring Agag, king of Amalek, to me.” Agag came to him struggling and saying, “So it is bitter death!” (NAB)

According to both translations, Agag in the first was quite mistaken and in the second quite right about what was coming: the next thing that happens is that he is "hewed...in pieces before the Lord."

The book is excellent. I took it with me on a long flight last weekend and didn't finish it, and sat down with it as soon as I could after I got home. My old paperback edition has a blurb claiming that Marsh writes better than Agatha Christie, and I'm inclined to agree, though it's been a long time since I read anything by Christie.

The story involves a rich, charming, feckless family, the Lampreys. They're delightfully portrayed in the way that only the British can do, possibly because they're the only nation that produces people like them. I wondered if the word "lamprey" meant the same thing in England that it does here, and I deduce from the original title that it must, though the family, who can be fairly considered somewhat parasitic, is not monstrous. On the other hand, it certainly suggests that Marsh didn't consider them, at bottom, very charming. Not, unfortunately, the edition I read, but art work more accurate than many mystery novel covers. 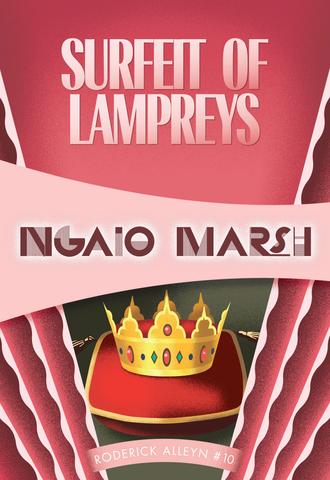 The current edition. Not especially appropriate art, except for the Art Deco vibe.

I have not read this author. I write in recommendation of another detective writer, Mick Herron. I am reading his comical Slough House series with enjoyment.

I bought a couple of Ngaio Marsh's books several years ago on the recommendation of P.D. James. (It wasn't a personal recommendation, just one I read somewhere, of course.) I've yet to read them though.

I heard one of hers as an audiobook quite a few years ago and enjoyed it. Also about an upper-class family, if I recall correctly. One odd thing about this one is that the murder is quite gruesome, unnecessarily so in my opinion. Not very cozy but no wonder P.D. James recommends her. :-)

It occurs to me to wonder whether an actual Briton might find this stereotypically upper-class-Brit crowd rather...twee. I remember John Derbyshire, non-upper-class Brit, saying that the upper-class British accent put his teeth on edge.

I haven't heard of Mick Herron. How do you pronounce "Slough"?

Mission partly accomplished. Already DuckDuckGo returns this post as the top result for "walking like agag ngaio marsh." Google does not return it at all. I'll check again tomorrow.

I am pretty sure I have read them all at least once, and some a few times. I was reading them in order once, and I think I made it to the end.

Alleyn is probably my favorite detective.

There is a BBC series that is pretty good. The first one was dreadfully unfaithful to the text, misinterpreting Alleyn's character, but they got another actor for the rest, and they are better. I think the actor that plays Fox is wonderful.

And the first episode appears to be impossible to find. Someone put it in YouTube once, but it disappeared pretty quickly.

The humour is chaucerian

It can be slew too. I love the Slough of Despond in Pilgrim's Progress.

I meant how does Grumpy in particular pronounce it. It’s a weird word. It can also be “sluff”.

There are some Alleyn mysteries on Amazon but you have to rent them. I’ll check and see who the actor is.

Its not sluff no. Slow horses is a pun on Slough House

The Agag scene in I Sam is difficult to write about because its all there on the page. What else do you say?

They are better to read, anyway.

Chief Inspector Alleyn was a different kind of role for Patrick Malahide. He usually seems to be cast as a nasty, sinister character.

The actor who played his sidekick, Inspector Fox, was William Simons. IMDB says he was born in Mumbles, South Wales. Mumbles? My first thought was, crazy Brits. Here's what Wikipedia says:

Mumbles is a headland sited on the western edge of Swansea Bay on the southern coast of Wales. ... The headland is thought by some to have been named by French sailors, after the shape of the two anthropomorphic islands which comprise the headland: the word "Mumbles" may be a corruption of the French les mamelles, meaning "the breasts." Another possible source of the name is from the word Mamucium which is generally thought to represent a Latinisation of an original Brythonic name, either from mamm- ("breast," in reference to a "breast-like hill") or from mamma ("mother," in reference to a local river goddess).

Thought I recognized Patrick Malahide in Amazon's photo representing the series. So was he the good Alleyn or the bad one?

I think if I were writing about Agag I would focus on "before God."

When a snake sloughs off its skin, it's "sluff", isn't it?

There is a place in England call Slough and it rhymes with cow.

I don’t mean “sluff” or “slew” is the correct one, or any more correct. Just saying those are variants in actual use. I think. “Slew” definitely is. When I see it in print I don’t know which is intended, unless there’s some clue like Betjeman’s rhyme.

Success. Now this post is the first Google result.

Malahide is the good one. This was the first role I ever saw him in. I am glad I didn't see him as Casaubon first.

Yes, it can be "slough." That's always the first thing that comes to my mind.

Like Marianne, I associate Malahide with villainous characters, although I can't think of a specific one. I don't know who Casaubon is. Or rather I didn't until just know when I looked him up.

Oh. I thought we had talked about Middlemarch here. Wonder where that was.

It's possible. But I've never read it or seen a film/tv adaptation..or have I?...definitely haven't read it but there was some George Eliot thing I saw some years ago...I don't remember, anyway.

How interesting.
I have not read that Ngaio March thriller, but came across “Walking Like Agag, Delicately” as a chapter title in Dennis Wheatley’s “Star of Ill-Omen”.
I was at Secondary school and asked our school vicar what it meant.
And why did I know to ask him? Maybe my Dad suggested it.
I wish I could remember his reply.
The context was the same, a cautious approach because of a possible mis-deed.
It makes me wonder how authors select such phrases for their work.
The chances that the reader will pursue the reference might be slim, maybe that doesn’t concern the author.
And that reminds me of the film Out of Africa - who in the audience knew the Latin phrase it appears in?

I strongly suspect that Marsh was just using a phrase that people of a certain place and time would probably recognize, at least in its meaning if not its source. My parents (born in the 1920s) and no doubt their parents had certain phrases and figures of speech that have fallen out of use and which they themselves probably didn't know the origin of. The only one that comes to mind right now sounded like "Cox's army." I remember my mother using it to refer to a somewhat chaotic crowd of people, usually children. "It looked like Cox's army at that birthday party." I've never heard anyone younger than my parents' age use it.

It was many years later, and I don't remember exactly how or why, that I learned its origin: "Coxey's Army", a protest march held in the late 1900s:

I had no idea that Out of Africa was a Latin phrase, but then I've not seen the film or read the book.