Saint-Saëns: Septet Op. 65 for an Odd Combination of Instruments

Some months ago I came into possession of a great many (hundreds) of old LPs, almost all classical. An elderly priest who had spent many years as an English professor had died, leaving behind an awful lot of books and records, and the archdiocese was going to give them all to Goodwill. I was given the chance to snag some of them before they were dumped. Most of the books were already gone, but I  brought home several hundred classical LPs which I certainly did not need and don't have room to store. This was the scene when I first brought them home (I may have posted this before, I can't remember): 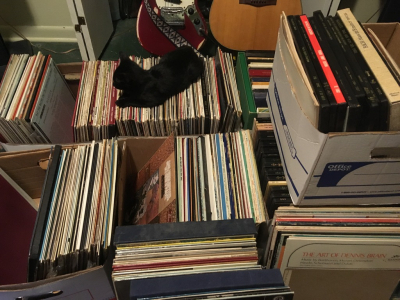 I managed to give away something like a hundred disks that I either didn't want or already have: opera highlights, for instance. But I still have...I don't know, three feet or more of LPs, and have finally begun to listen to them. That's not as simple as it sounds, because I am a bit compulsive about wanting records to be clean before I put the needle of my precious turntable down on them, and I have to run them through a record-cleaning device before I play them.

I pulled several dozen out of a box last week and got them ready to go. As they aren't organized in any way, it was a random selection. Then I pulled one at random from that bunch, and it happened to be this one: 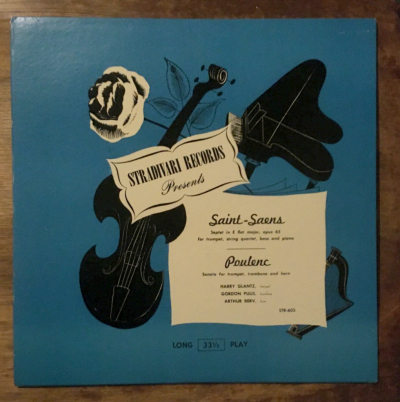 Most of the records in this haul are from the '50s and '60s--the priest who owned them was quite elderly when he died. There's no date on this one but from the looks of it, and from the sonic quality, I'd guess it was released in the early '50s, possibly even the late '40s. I haven't been able to find any information on the company. Perhaps it was a budget label in its day. Or maybe not "perhaps" at all--there are several more disks from the same company in these boxes and the design is exactly the same on all of them.

Saint-Saëns is not a composer to whom I've paid much attention. I think of him as a sort of standard or generic 19th century composer. That's not a compliment, and of course it's unfair. I know I've heard the cello concerto at least once or twice, and probably others among his more often-performed work, but...well, like I said, they just didn't catch my attention.

But I love this piece. I think I've listened to it at least five times over the past week. It doesn't reach great heights or great depths, but it's full of melody, it's continually interesting, and it has substance. After a couple of hearings I thought "This is like those baroque dance suites." Then later I read the description in Wikipedia:

The Septet (1880), for the unusual combination of trumpet, two violins, viola, cello, double bass and piano, is a neoclassical work that draws on 17th-century French dance forms. At the time of its composition Saint-Saëns was preparing new editions of the works of baroque composers including Rameau and Lully.

It's in four movements; I like the inner two best. The presence of the trumpet is definitely a little odd, but it works. Listen for yourself:

This performance seems more engaging than the one on my LP, but that may be only because the sound is definitely better. On the LP I can hardly hear the bass at all. Three of the performers, Harry Glanz on trumpet, Brooks Smith on piano, and Philip Sklar on bass, were well-known enough in their day that an internet search turns them up readily. Not so the Stradivari Records String Quartet, whose members are not named.

On one hearing I didn't care much for the Poulenc piece on the other side of the LP. I'll give it another chance, but a brass trio? Not really my cup of tea.

Interesting -- I'll have to give this a listen, as I like that sort of thing (i.e., Respighi's "Ancient Airs and Dances").

Discogs doesn't list any info on Stradivari Records, and it only shows 17 releases on the label, mostly from 1948-1952. This doesn't mean that's all there were -- those are just the ones that have been listed for sale or are on people's want lists. The last release shown is from 1964, but apparently they were a decent enough label for the Musical Heritage Society to reissue a few of their recordings in the late 60's.

The store where I buy my records has thousands of used classical LP's in the basement but they're in no semblance of order. On the other hand, another used record store that's on the other side of the city has a whole room full of them and it's very well curated. They're a big store and they have an older fellow who works two or three days a week concentrating on the jazz, classical, and vocal/big band sections, while the younger guys deal with all the rock and pop. I'd go there more often if it were closer and parking there wasn't such a bear.

Did your wife cry when you brought them home. ;-)

That would have been justified and understandable. But actually she's the one who gave me the opportunity, as she was present when they started emptying out the priest's apartment. She is a wonderful woman.

Those look like some great record stores, Rob. That's one nice thing about living in a big urban area.

The Discogs entries were also the only mentions I found. Having "Stradivari" is part of your search term is sort of like looking for a person named Smith.

Probably much better than I.

If I "inherited" a collection like that I'd be worried that I'd never go out of the house.

You might be surprised at how little time I actually spend listening to music. There always seems to be something more pressing to do. And there's some odd guilt sort of thing that keeps me from indulging as much as I'd like. Yes, five times in a week or so for this piece, but it's less than 20 minutes long, and I think only one of those five involved sitting in a chair and doing nothing except listening. Which makes the continuing accumulation of music even crazier. In my defense, though, I did not seek these out.