Light On Dark Water
Home Archives About
Bill Monroe: "Midnight On the Stormy Deep"
The Closing of the American Mind, Visited

Or, as we commoners ought to keep in mind, Elizabeth Cary, Viscountess Falkland. I suppose that if we were to address her we would need to use some honorific of the "your ladyship" sort. But that won't be necessary, as she died in 1639.

I only know of her because the June issue of Magnificat had a short article about her by John Janaro. You can read it, just slightly revised from Magnificat, here.

Elizabeth Cary was a remarkable woman in her own time.  Indeed, among women or men of any period she would qualify as a genius.  She was born about 1585 in Oxfordshire; in her desire to learn she outpaced her tutors almost from the beginning of her education, and she was fluent in multiple languages and widely read by the time of her marriage to Henry Cary, Viscount Falkland, in 1602.

Janaro goes on to summarize her marriage, which produced eleven children in fourteen years, and eventual entry into the Catholic Church, toward which she had been moving since a fairly early age.

I learned more about her from her Wikipedia page. Janaro mentions in passing that she wrote a play called The Tragedy of Mariam (subtitled The Faire Queene of Jewry) . If you're not up to speed on your faire queenes of Jewry, Mariam is Mariamne I, second wife of Herod the Great, and her life is indeed the stuff of tragedy (see Wikipedia). This makes Elizabeth Cary the author of the first published original play in English by a woman.

One of her daughters, one of four who became Benedictine nuns, wrote a biography of her mother, The Lady Falkland: Her Life. I imagine both the play and the biography would be interesting reading. 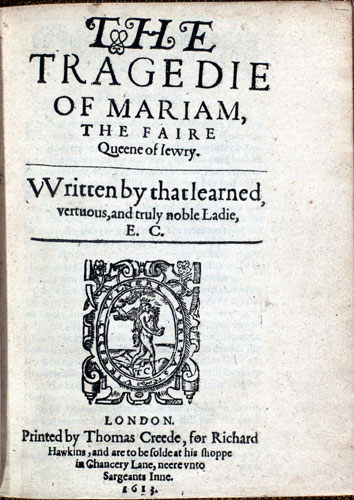 Update: here's another profile which goes into more detail about her conversion.