Two summers ago the beer section of the supermarket I normally patronize (Publix, in case you wonder) added something called "grapefruit shandy," made by Leinenkugel's.

As far as I can remember the only Shandy I'd ever heard of was Tristram, but I learned that it's a term for beer combined with lemonade--apparently the default meaning--or some other sweet beverage. I like beer a lot and I like grapefruit juice a lot, so I thought this sounded interesting enough to justify my buying a six-pack. I did like it, and I also tried Leinenkugel's Summer Shandy, which is the lemonade version, and which I liked, but not nearly as much. Toward the end of summer both disappeared from the shelves at Publix.

Last summer I waited in vain for the grapefruit shandy to appear, but only the lemonade version did. I bought a six-pack or two of the latter, but remain unenthusiastic about it. And this summer the same thing happened. Publix does have a Leinenkugel's grapefruit-flavored "spritzen": "beer with a splash of seltzer and natural flavors." I tried it, and...no. It's ok if you like flavored water, though it does have a 4.2 alcohol content and only 93 calories, so I guess it's better than lite beer.

One day last week as I stood inspecting the beer shelves--twice, in case I had missed the grapefruit--it suddenly dawned on me that if grapefruit shandy was literally beer and grapefruit juice, I could, should, and would make my own. So I decided to experiment, and bought a six-pack of my favored relatively light and crisp beer, Fairhope Brewing Company's Cheap Sunglasses, and a carton of grapefruit juice.

I started with a shot (1 1/2 oz.) of grapefruit juice and a can of beer, and it was absolutely perfect. It was as if Edison's first idea for a light bulb had been a total success. I need experiment no further. 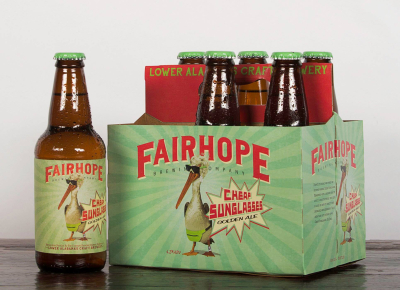 I realize these are bottles, not cans. FBC recently switched to cans.

Unless you live in this area you probably can't get Cheap Sunglasses, but I'm sure there are many others that would work just as well. It's described as a kolsch (or rather "kölsch"). I'm not enough of a beer connoisseur to be able to keep the terminology straight in my head for very long, but "pale, highly attenuated, hoppy, bright" (according to Wikipedia) does sound perfect as a companion to the flavor of grapefruit.

You should never buy a lot if something you really like, because it will soon become unavailable for ever.

I am glad you had your inspiration.

Dark cherry Fresca. They found out I liked it and took it away. Another grapefruit drink down the drain.

I'm inclined to be more fatalistic: if you really like it, it will become unavailable.

I used to like Fresca once upon a time. I had no idea they even made it in different flavors.

But that's what I said, isn't it? Or do you mean you don't even have to buy a lot of it.

Apparently, every time I want to type of, it comes out if.

Right this moment, I just want some grapefruit juice. You don't suppose they can get rid of all that, do you?

Surely not. They didn't take it away from me, though I haven't checked since I bought some over a week ago.

Back when I was younger and quite the Anglophile, I used to drink shandy occasionally when I wanted to limit my alcohol intake. The original English version was half beer, half ginger ale. The use of lemonade came later, but note that UK lemonade is usually carbonated, so when you mix it with beer you don't lose any fizz.

Interestingly, wikipedia says that there are two types of ginger ale. The traditional version, invented in Ireland in the 1850's, is sweeter but has more ginger flavor -- it's a lot like the Vernor's of today. The newer version, "dry" ginger ale, was invented in Canada in the 1890's, and is what we are all familiar with in the States -- less sweet, less ginger.

I'm not a fan of fruit beers but the idea of a shot of grapefruit juice in a beer sounds pretty good. My "local" pub always has a good lager or pilsner on tap so next time I'm there I'll give it a try.

Speaking of which, a friend at said establishment recently put me on to Aperol, which is a light Italian bittersweet liqueur. It's very good with ice and soda, and makes a nice change from my usual summer G&T. Plus at only 11% alcohol you don't have to worry so much about potentially overdoing things.

So that's where the "dry" part of Canada Dry came from. Interesting.

I like fruit beers as an occasional thing if they're more tart than sweet. I'm pretty sure I would not much like a shandy that was 50% lemonade or whatever. Another local brewery, Braided River, has a very tart fruit-ish beer called Summer Crush that I like.

My non-beer summer drink is, ahem, the one I invented and called the Silvery Moon. Basically a martini with club soda and lime juice. I haven't heard of Aperol but I suspect it's not available here.

What are the proportions in the Silvery Moon? Not sure how these things work but you should get it patented. Submit the idea to one of the gin companies or something.

You might not like Aperol as it's a little on the sweet side, although it does have a slightly bitter finish, which cuts the sweetness. Have you ever had Campari? Aperol is a sort of lighter, less alcoholic version (I think Campari's about 40 proof -- most people don't drink it by itself, but it's popular as part of the "Negroni" cocktail).

You can patent drinks? Whoulda thought it?

Vodka, vermouth, club soda, lime. And ice. Whatever vodka-vermouth proportion you like in a martini, then about the same amount of club soda. I described it in this post back in 2017 (scroll down past the main parts):

I see now that I've varied some since then. I frequently use gin instead of vodka. I rarely bother with an actual lime, and just use eight or ten drops of lime juice. And I tend to use closer to double than equal the amount of club soda. Makes it last longer. :-) I also have a thing that makes one big sphere of ice, which also helps make it last longer. I'm a slow sipper.

I couldn't believe it didn't already have a name, as it seems like a pretty obvious thing, but I never could find an existing drink that matched it exactly.

I actually have a bottle of Campari, almost empty now, which I got for the specific purpose of making a Negroni, which was recommended to me by someone who had seen the Silvery Moon post. I wasn't all that keen on it (either the Negroni or the Campari itself).

I presume one could make a Negroni with Aperol instead of Campari. It would be lighter and less sweet, and you'd probably taste the gin more. But it would still have that Campari "herbal" flavor, and that's what a lot of folks don't seem to care for.

I don't think it was that particularly. I didn't dislike the Negroni, just wasn't excited about it. And iirc the 750ml bottle of Campari cost somewhere around $35, so not worth buying more of for a drink I'm not excited about. Liquor prices are fairly high here.

No Fresca in Mississippi, sigh.

Went to the pub last night but they were out of grapefruit juice. Will have to make your shandy on my own.