On the weekend of November 6, i.e. the weekend after the election, my wife and I made an overnight trip to my ancestral homeland of northern Alabama. It's a 5 1/2 hour drive at least, more if you make more than the minimal stops, so we usually listen to an audio book on the way up and back, trying to find one that will take most of the time but not go over it. This time it was the above-mentioned Josephine Tey novel, read by Carole Boyd.

It's pretty rare for me that I recognize the name of the reader of an audio book, and the pattern held here. The quality of this one is so fine that I wanted to know more about the narrator, so as soon as I got home I looked her up. It turns out that Carole Boyd is a moderately successful actress (see Wikipedia), especially so at voice work.

I don't wonder. This performance--it really should be called that--is a delight. Not for the first time I've had a fairly ordinary book come really alive in the hands of a gifted reader. This has been true above all with novels set in England or some other part of the British Isles. A reader like Carole Boyd gives you not only a greater sense of the personalities of the characters but does great things in placing them socially. And that's probably especially important in English settings where class and regional accents are so important. It's almost like the difference between color and monochrome.

And I'm not sure about the "almost." Just out of curiosity, I checked the book (the physical book) out of the library and read bits of it: not nearly as vibrant.

As for the novel itself, it's not a great one, even in comparison to other mystery novels, but it's a good one. It's a crime story, but not a murder mystery. The crime is that two women, a daughter and her mother, the one middle-aged and the other elderly, have been accused of kidnapping and mistreating a teenaged girl. There are grounds to think they did not commit the crime, and the story is the working out of that question.

Much of the enjoyment of the book is in its picture of an English village of the sort that Americans like to imagine: a small, comfortable, quirky place, where the good things and good people outnumber the bad, and the serving of tea and digestive biscuits occurs frequently. The heyday of this image was roughly the first half of the twentieth century, and although that span of time includes some truly horrible times for the British Isles, these portraits must have had at least some validity. Josephine Tey (real name Elizabeth MacKintosh) was actually a Scot and spent most of her life in her native land, and I wonder if perhaps she was a little susceptible to that somewhat romantic image.

That setting and characters, which perhaps put the book in the "cozy" category of British crime fiction, were one reason that the book was an especially good choice for that drive. With the election and all the associated vicious politics on our minds, it was nice to get away to a very different time and place, one much more human and pleasant than our own, at least as portrayed in the novel.

But it also has some relevance to our time, and in a particular way: one series of incidents in the story involves newspapers turning falsehood into something that "everybody knows," with dangerous consequences. The proud contempt of the book's principal characters (as well, one supposes, of the author) for the purveyors of these lies, though it was powerless, was somehow heartening.

There were a few other distant similarities to current events, some, like the aforementioned, particularly resonant to a conservative mind. There's a fool of a (C of E) bishop who wades into the business in complete ignorance of the facts but very conscious of political fashion. And mobs attack the home of the two women, one writing "Foreign bitches!" on the wall that surrounds the place, another "Fascists!" "The insults of the country and of the city," observes one character, in a brief remark that captures some of the underlying forces active in our own divisions.

The trashiest of the newspapers is called the Ack-Emma. Hearing this word only, I couldn't imagine what it was or what it meant or why a newspaper would call itself that, or why an author would decide to have a newspaper call itself that.. Thanks to the internet, I now know that it's a British slang-y term for "morning," derived from "a.m."

Another slightly odd thing: "The Franchise" is not some kind of business matter, but the name of the house where the two women live. If any explanation of the name was given, I missed it. 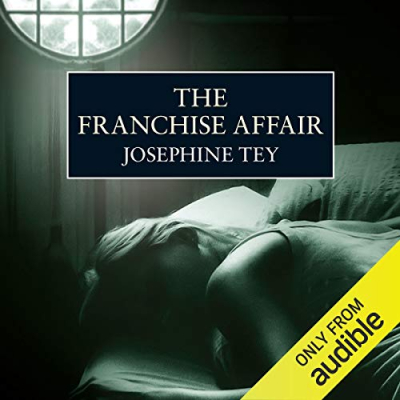 This picture is inaccurate. It's a significant element of the plot that this window is divided into four panes.

Another books which was similarly enriched for me by hearing it read was Colin Dexter's The Daughters of Cain, an Inspector Morse mystery. I listened to it on a similar trip last summer and meant to write about it then. Everything I said about Carole Boyd's reading applies to this one. The reader is David Case, who apparently does a whole lot of these. He is the only person I've ever heard consistently pronounce all three syllables of "Wednesday": wed-ness-day.

I am currently listening to a Librivox recording of Phantastes which is actually making me like the book despite the fact that the reader cannot pronounce some words like "sepulchre" and "librivox."

Oh man, I had totally forgotten that you had written about her for the 52 Authors series. My bad memory continues to scare me occasionally. Anyway, that's really good. I prudently looked at the comments on it before commenting on this one, and I see that I said there what I was about to say here, i.e., that I know I once had a volume that included three of her novels and was called Three By Tey, but it's not here. Wasn't here in 2015, still not here.

Who's the narrator of the Phantastes recording? Some (ten? more?) years ago I listened to a Librivox recording of another Macdonald book, maybe The Princess and Curdie, and found it charming. Not on the level of this Tey book, because the reader was not a gifted and trained actress, but very engaging. It helped that she was Scottish.

Maybe it also helped that it was (maybe) The Princess and Curdie. :)

Entirely possible, I'm sure. But in truth I've never been all that taken with Macdonald's fiction, not that I've read all that much of it (and that's why). So I was inclined to give the reader some of the credit.

I think I tried to read Phantastes and didn't particularly enjoy it. But I love the Princess and the Goblin and The Princess and Curdie. It's entirely possible that it's because my father read them to me when I was a child, but I did reread them as an adult (still many years ago) and was not disappointed. Maybe it's time to read them again (if I can get myself to read something longer than a tweet - or a blog post when I'm feeling ambitious).

Phantastes is the one that I wasn't much taken by.

Glad this blog is one that your ambition leads you to. :-)

This is a man, Brad Powers, but obviously not the same. I'd like to hear the woman with the Scottish accent.

I do like most MacDonald, but I have never cared for Phantastes. We have discussed at CSL meetings, maybe twice, but that didn't help. I think it was because most people didn't like it. Now, I am liking it quite a bit.

Here's a post where I discussed that recording. I haven't checked to see if it's still there.

Man, is it good that people are talking about Something Else!

I've been trying to ignore It. Seems like one has a choice between becoming an Apathetic Citizen or going a little crazy.

She does read nicely. Maybe I will listen to it on our next trip, whenever that may be.

I am following a discussion of Phantastes on the Literary Life Podcast, and it is partly the reason why I am appreciating the book more, but I think it's mostly hearing it read.