I have a prejudice against ballet music. It's probably not uncommon: I call it a prejudice, but I could fairly maintain that it's a rational judgment. By its nature the music is episodic and tied to a story, or at least a series of scenes or tableaux, which are meant to be seen in conjunction with the music, and in fact are meant to be the main attraction. So if you're listening to the music alone you tend to get a group of little pieces that don't necessarily seem to be that well connected, and whose tie to the story is either limiting or vague or both. In any case it has to be supplied from outside.

I love The Rite of Spring and it's so intrinsically tied to its program that I can't imagine it being other than it is. But I wonder what I, and for that matter listeners in general, would think of it if it had just appeared as pure music with a neutral title like Concerto for Orchestra. I'm sure it would have still made a splash, but would  it have made the splash that it did, with the intentionally shocking primitivism of the ballet? Would it have been criticized as lacking unity? Impossible to know, obviously. I haven't heard it for some time, so I think I'll listen to it with that in mind.

But then if we're talking about a suite chosen from the ballet it's not really a fair criticism. A suite is by definition a set of distinct pieces, not a single coherent composition. I hear The Nutcracker Suite as a set of wonderful small works, and I love it. (I'm never sure about the officially correct name of the thing, and even less sure about how it should be italicized or quoted, but that's the way Wikipedia does it, so I'll go with that.)

Anyway: the next two LPs in the Fr. Dorrel collection, in the order in which they happen to sit on the shelf, are two volumes of Aaron Copland's music, three of them ballet scores, or suites taken from them.

Both these pretty much fit, and are limited by, the remarks I made above. Both are pretty "sectioned" and I really like some of the sections, others not so much. The opening of Billy the Kid is great, that Copland wide-open-spaces sound which somehow has come to say "America." And the gunfight, which is mostly percussion, is certainly interesting. And I wonder how it would be taken if, as I suggested re The Rite above, it were extracted and presented with a bland title. In this case people might actually say that it sounds like a gunfight.

This recording also includes a bit from the ballet which apparently is not officially part of the suite. It's called "Billy's Waltz" and it's a simple, unpretentious, and lovely piece which deserves to be heard.

Rodeo...well, broadly speaking my view of it is much the same. I like some of it, mainly the quieter parts. It strikes me as a bit ersatz, maybe a touch patronizing, when it ventures into barn-dance territory, as is true of certain portions of the other ballet.

The recording doesn't strike me as great, either sonically or as a performance. But it certainly isn't bad, either. The sound really is pretty impressive for its time.

About this recording I'm somewhat ambivalent. The sound is terrific, noticeably better than that of the Westminster disk, even though it was recorded only a few years later, in 1962. I can't fault the performance, which is crisp and precise and energetic, flawless but not slick, with striking dynamics. But those dynamics are a bit too striking for my taste and the level of energy borders on the aggressive. The loud entry of the strings in the second section, after the gentle introduction, is jarring to me.

But my reservation is at least in part the result of prejudice in favor of another recording: the full ballet in the original instrumentation, conducted by the composer. 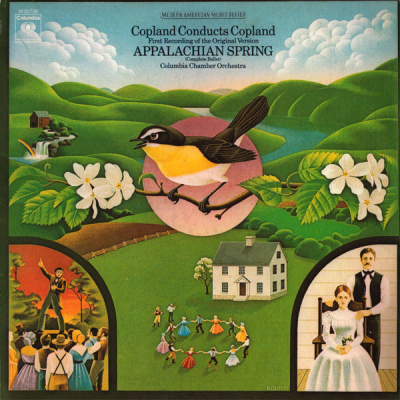 Bernstein's recording is a beauty, but this one is the sweet shy quietly pretty girl whom you didn't notice at first but who steals your heart when you do. The original instrumentation is only thirteen instruments: flute, clarinet, bassoon, piano, and a set of strings--that was all the theater had room for. This is also the original score, roughly a third longer than the suite. Copland says that the only change he made for the suite "was to cut a few spots that were needed only for choreographic purposes." I haven't tried to figure out what was cut, but I think the extra length is part of the reason that this recording has a more leisurely quality. But aside from that, the chamber orchestra makes it an altogether gentler, sweeter, more intimate piece of music, and for me more moving. And I think it's more appropriate to the low-key story line of the ballet, which depicts a wedding.

I hadn't heard this LP for many years, so I got it out to see if my old affection still held. It does. Maybe it's only because this is the recording by which I first got acquainted with the piece, but in any case I prefer it. Looking around the web I get the impression that it isn't in print as I originally bought it in the 1970s (Columbia M32736, pictured above). But I'm pretty sure it's available in some form, as I see several "Copland Conducts Copland" collections. The same no doubt is true of the Bernstein recording.

The most well-known part of the ballet is the use of the tune "Simple Gifts," which Catholics and others are accustomed to hearing as "The Lord of the Dance." I have always disliked that song for some reason and am relieved to find that it hasn't hurt my enjoyment of Copland's music.

Copland says that El Salon Mexico is "the Mexico of the tourists," not "the more profound side of Mexico," which "would have been foolish for me to attempt to translate into musical sounds." Fair enough. It's a short (under eleven minutes), lively, colorful piece: nothing deep, but I find it hard to imagine anyone not enjoying it.

The Dance from Music for the Theatre is only a few minutes long and ends with a sort of near-iambic pair of beats--'DaDUM"--which in my mind immediately turned into "So what?" I had no reaction worth remarking upon to the piece. The liner notes say that the work as a whole "was not intended for the theatre, but rather as a commentary upon it." I'll give it another chance some time.

As you probably know, while Copland's music is thought of as being deeply connected to the American landscape, especially of the West, and to rural or rustic life, he was a Jewish homosexual from New York.

I've known that for a long time. What I did not know until I looked him up on Wikipedia a few days ago was that William "Billy the Kid" Bonney, whose real name was actually not William or Billy but Henry McCarty, was also a native of New York City. Ain't that America?

I do like Copeland. I may even have to listen to some while I am gardening this week.

Unfortunately, I am unable to discuss this in any intelligent way.

I guess it would be superfluous for me to recommend something. :-)

You can recommend something, but can I get it for free?

I just meant it’s superfluous because I’ve already recommended AS. And to a lesser degree the others. But anyway I’d be surprised if you couldn’t find all of these on YouTube. And streaming services too I’m sure.

Right. I should pay more attention.

I've never been able to warm up to Copland for some reason, which is strange, because I like Ralph Vaughan Williams's somewhat equivalent "pastoral" music very much indeed.

I can see that. Their national musical traditions are so different. The term Americana could be applied to Copland’s work.

Maybe I should say rather that the vocabularies are different. Anyway it's not especially surprising that you might like the "nationalistic" work of the one and not the other.

True. I do have a preference for English and Celtic folk music over American, so that would make sense.

Speaking of ballet, one of RVW's great "unknown" pieces is Job: A Masque for Dancing, which is music for a one-act ballet. In my opinion its music ranks right up there with some of his best.