There are three kinds of people in Alabama

(1) Those like the man who erected this sign, which is highly visible from I-65, a highway I travel often. 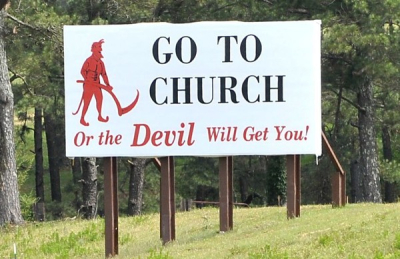 (2) Those who see the sign and are indignant and say "That's so stupid. Can you believe there are such idiots in the world? I'm embarrassed that I live in this state."

(3) Those who see it and laugh but say "Well, actually he has a point."

Here, by the way, is some information on the man responsible for the sign.

I recall seeing it as long ago as the 1980s. A few years ago it disappeared and I was afraid that the forces of Godlessness had finally prevailed: someone had decided it was too divisive or something. But it had been blown down by a storm, and was eventually put back.

Now that I think about it some more, though, and having read the second piece linked above, I see there are actually four types of people.

(4) Those who think it's crazy but like the fact that there is still some untamed eccentricity around.

Then there are the kind of people who have driven around in the rural South so long that signs like that don't even register.

I know what you mean, but this one registers, because it’s so big and loud and there’s not much else around.

I was certainly taken aback the first time I saw it, somewhere south of Birmingham, right? I guess I just smiled and thought, "Only in Alabama."

Or maybe Mississippi. Rural Georgia or Tennessee or northwest Florida. The last is an interesting situation because fundamentalist Christians and beach party people coexist. There was a big charismatic thing there a while back, maybe still is...it had a name...oh yeah:

We have been discussing the sign, and are pretty sure we took note of it. I think Bill commented that it was pretty harsh.

It is that. I wasn't sure whether you had driven that stretch of interstate before.