Light On Dark Water
Home Archives About
Politics and Pretty Boy Floyd
"Of all deceivers...

An admission: I admit that I don't love Beethoven as I should. "Should" is a questionable term, I know: why should one love this or that artist? Well, in this case, he is such a giant that to feel a little standoffish from his work seems to be a fault in oneself rather than the artist. It probably is.

Before I go any further, I have to say that this is most certainly not any sort of denial or even diminishment of his universally acknowledged greatness. And I love some of his music as much as I love any. I think it's a matter of personality: there is something in his which I don't warm to. I don't, for instance, think that I would have enjoyed his company (which would no doubt be true of many composers, Wagner coming first to mind). I mean his musical personality, or his personality as it comes through in his music--I probably know about as little of him as a person as someone who's been listening to him for over fifty years possibly could.

How to describe it, that something which I seem to hear sometimes in the music? Irritable. Impatient. A bit ponderous: I can imagine Beethoven fulfilling the stereotypes about Germans and humor. Perhaps somewhat egotistical. Unsympathetic. The opposite of genial.

But never mind all that. It's my idiosyncrasy, and I certainly don't proffer it as an accurate remark about Beethoven.

It's all a preface to, and maybe sort of a justification for, my reaction to this recording: lukewarm. The septet is a relatively youthful work, written in 1799. Beethoven was twenty-nine, not exactly a youngster by comparison with, say, Mozart, or Schubert, neither of whom made it very far past thirty. It's not the brilliant and profound Beethoven who would appear just a few years later.

By any reasonable standard it is a good piece of music, but I have no enthusiasm for it. I was mulling over exactly how to explain that when I remembered that in the earlier days of this blog I had written about the symphonies. Here's what I said about the First (you can read the whole post here):

I admire it, but I do not love it. There is obviously a great gift at work here, and the symphony is interesting, but little of it moves me. It’s of course very much more of the 18th century than Beethoven’s later work, but it seems a heavier Mozart, and a less orderly Haydn. I have the sense that he’s gotten hold of a powerful force but isn’t yet quite in control of it. And I hear some of the things that have always bothered me: the spasmodic leaping rhythms, the repeated quasi-climaxes, and a quality I can only describe, not very informatively, as “dryness.”

That's more or less the way I reacted to this piece. I gave it my obligatory three hearings, and I did warm up to it, but it isn't going to be a favorite. Here's a performance, the first one that popped up when I looked for the piece on YouTube.

The recording is another from the Fr. Dorrel trove: London CM9129, released in 1960. It doesn't seem to me to have any special merit as a recording. And I wonder if, and how much, the ugly cover may have influenced me. That portrait of Beethoven might have been done by someone who disliked him. 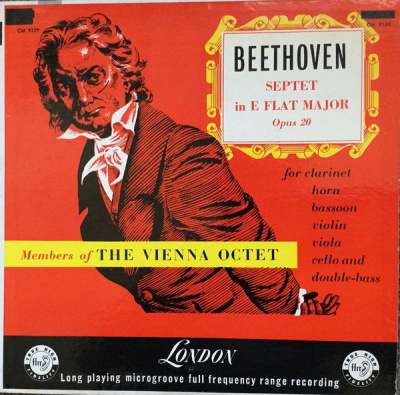 Funny, Mac, but my feelings about Beethoven are pretty much the same as yours. Overall I find him rather heavy and serious. The only piece I can claim to really "love", besides some of the solo piano works, is the 6th Symphony, the Pastoral. I don't actively dislike the other stuff, but it doesn't produce anywhere near the passion in me that it does for a lot of other folks. I can listen to him with a certain amount of pleasure, but he's not a "go-to" composer for me.

I'm glad to hear that. I wonder if the phenomenon is more widespread than I thought.

I can say that I love a good many of the other works: the 4th, 5th, and 7th symphonies, for instance. Several, at least, of the quartets. But the finale of the 9th always strikes me as bordering (at least) on bombast. Another adjective that occurs to me is "strained"--that he sometimes seems to be battering on a door that he can't open. I've seen a feminist critique that I thought was overall pretty wrong-headed (not to mention lurid), but I also thought "you're wrong but I can sort of understand why you say it."