One slightly annoying aspect of the current state of this blog is that at least half, maybe more, of the visits to it are from people who have searched for some relatively obscure thing and gotten a link to one of my posts. Whether or not whatever they found here is useful to them or not, they don't stick around, and they don't come back, at least not soon or regularly. Well, that's fine--happy to be of help, if I was. But it means that when I look at my statistics and want to know how many people read the blog intentionally, I have to figure the number of visits by those people, as opposed to those who have been pointed to some specific post on some specific topic and are otherwise not interested, is at best half of the already small number.

One of the more frequent hits is the 2012 post called "Getting Started with Kierkegaard." A fair number of people want to do that, I guess. The post consists of little more than the question: where to start? And there are some good recommendations in the comments.

Which did I pursue? None. The last two comments there reveal the sad picture: about this time last year someone asked if I had an answer to the question. Sadly, I did not, because after eight years I had not so much as picked up one of Kierkegaard's books: it was another of my intellectual projects that failed before it really got started.

But I have resumed it, thanks to the Eighth Day Books catalog that I received some months ago. They offered a book called Provocations: Spiritual Writings of Søren Kierkegaard, which is a compendium of brief excerpts intended to provide an introduction to Kierkegaard's thought. I thought that might be a good way to take up my abandoned but not forgotten plan.

Having bought the book (from Eighth Day), I was a little disappointed to find that the editor has in some cases resorted to paraphrase and abridgement in the interests of making Kierkegaard's meaning clear to the more casual reader. Perhaps I'll want to go on from here to specific works. But on the other hand this may be all the Kierkegaard I need.

At any rate I'm finding it very rich in insight, and besides that enjoying it very much. Isn't that epigram fantastic? 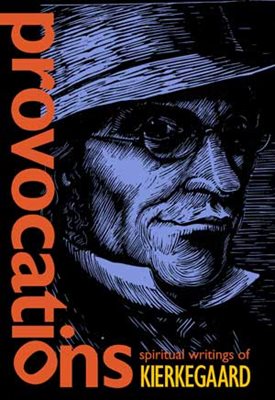 Here's a link to the publisher's description. And by the way it doesn't seem to be available from Eighth Day anymore.

Well, this is a convenient segue back to The Moviegoer. You may remember that there is a Kierkegaard quote at the beginning of the book which reads, "...the specific character of despair is precisely this: it is unaware of being despair."

It took me a while to bring up that quote, so I'm going to go ahead and post this before TypePad decides I've been idle too long. Then I will continue with another post.

There will probably be spoilers sooner or later. The hosts of the Close Reads Podcast, which I have mentioned before, suggest that the book follows Kierkegaard's three stages to become one's true self: the aesthetic, the ethical, and the religious. I haven't completely thought this through, despite the amount of time I have been planning to write about it, but you can clearly see the first two in the part of his life that connects to Aunt Emily, and the third, gradually evolving in his relationship with his mother's family, especially Lonnie.

I have to go now, but I will really be back. I had actually written more on my desktop computer, but I could never finish it, because it just would not coalesce in my head. It probably still won't, but this seems a good starting point.

I've read less than 100 pages of Provocations, but it's already plain that Percy illustrates the three stages or modes.

I have a straightforward or at least non-philosophical question about The Moviegoer. What exactly is Binx's relationship to his aunt Emily? At one point he says "actually she's my great-aunt". But then who are Binx's grandparents? There's a scene where Binx is looking at a family picture in which two of the men are Emily's brothers. Binx's father is with them. So is Binx's father one of the brothers? In that case Emily is his aunt.

Well, having spent 15 minutes now looking through the first 30 pages or so of the book I'm beginning to think I made up the great-aunt business, because I can't find it.

Actually I should say that Percy illustrates the first two modes, but only brings Binx/us up to the threshold of the third.

I'll have to give that some thought.

The Kierkegaard epigram reminds me of something that I think one of the Desert Fathers said: It's a greater miracle than raising the dead for a man to see himself as he really is.

For years I've carried around in my head "Is not each a mystery to himself?" I don't know where I got it.

Yes, it does, and it may well be. Somehow I had the idea that it was from Nietzsche, and tried to find it online, without success.

Can you think of anybody who is writing good fiction nowadays?

You know about Daniel Taylor. He's written a couple of other novels which I haven't read. Ron Hansen is well-regarded but I was not especially enthusiastic about the one of his I've read, Mariette in Ecstasy. Not negative, just not enthusiastic. I know there must be others but...I'm not a good person to ask. I think my next fiction read is going to be Middlemarch. There's a long article about it in The New Criterion and I'd like to have read the book before reading the article. Not to mention that people with good judgment have been recommending it strongly to me since the '70s.

I wasn't looking for something to read. I am swamped with this gs to read, which is why I am so silent.

I was not expecting Middlemarch to be funny.

Does this indicate that you are currently reading Middlemarch, Mac?
I would like to re-read it. As often happens with BIG classics, the first time around I read too fast and end up enjoying but not storing into long-term memory. Eliot is such a great writer. I've read Adam Bede, The Mill on the Floss, and Silas Marner all multiple times, but have not yet returned to Middlemarch.
I do seem to recall some humor with Dorothea's old and crusty husband...

Yes. As I mentioned a few comments back, people have been telling me how good it is for many years. I think I read Silas Marner in high school...or maybe an excerpt...I'm not sure, anyway I didn't care much for it, and that prejudiced me against Eliot. Maybe it's just as well that I didn't read it earlier, because it's full of little contemporary and historical references that I would not have understood at all. I'm probably still missing some. I'm really enjoying it.

I may have said this on another thread, but I must confess to being disappointed by Middlemarch. I found it somewhat flat, like Austen without the humor. On the other hand I've read Silas Marner several times and like it very much. I've not yet tried any other Eliot except for the short stories in Scenes of Clerical Life, which I also enjoyed. For the record, my go-to Victorians are Dickens and Hardy.

As for good contemporary writers I'd put Mark Helprin and Wendell Berry at the top of my list. Also Marilynne Robinson. Below them I'd put the "Southern" writers Ron Rash and Tim Gautreaux (I believe the latter is a practicing Catholic). I didn't like Rash's best known novel Serena (too dark for my taste), but his little "mystery" Above the Waterfall makes interesting use of G.M. Hopkins's poetry.

No accounting for tastes, and especially for sense of humor. I like Austen's wry touch but I don't think I ever laughed out loud at anything in P&P (my only Austen), whereas I've done so several times with Middlemarch, though I'm less than a hundred pages in. One instance I recall: the very gifted, serious, and religiously earnest older sister thinking of the more conventional and in her eyes frivolous younger: "...if it were not doctrinally wrong to say so, hardly more in need of salvation than a squirrel. "

The humor in the relationship is made more piquant by the fact that the younger is in many down-to-earth ways much wiser.

I should reread Middlemarch at some point but before I do I'll probably read Adam Bede or The Mill on the Floss first.

By the way, have you read, or do you plan to read, Live Not by Lies? I'm considering it but I feel like I've gotten the gist of it from Dreher's blog. The title is certainly very very apropos for the times.

Yes, I've read it, and I think it's very good, especially the second half, where he interviews the Iron Curtain survivors, dissidents, etc.

Just checked my local library and was mildly surprised to see that they have it. And it's checked out.