Note: I learned (see the comments) after posting this that the book, unfortunately, is currently out of print.

I have only read about half of this book, and that was over a period of months. I take it with me to my weekly hour of Eucharistic vigil, much of which generally passes with my thoughts wandering all over the place, some of which passes in reading. More often than not I don't even open this book, which is why I'm only on chapter XII of XXIV.

But I'm writing about it now because it's only a week until the start of Lent, and I think this would be good Lenten reading. It's a series of talks given at retreats by Fr. Knox in the '40s and '50s (I think). It's down-to-earth and fairly casual, even light, in tone--at one point he mentions the sort of annoying acquaintance that we would like to "squash"--but rich with insight.

It was the last chapter I read that made me think to recommend it now. The chapter is called "Six Steps to the Crucifix," a title which made me expect a Stations-of-the-Cross sort of discussion, but it isn't that. The steps referred to are approaches to understanding and contemplating the Passion, beginning with a view of it as a fairly straightforward and all too common instance of human crime and folly.

On the lowest level of all, then, what does the spectator of Calvary say to himself? He shrugs his shoulders and comments, "Well, I suppose that is the way of the world! Here was a man who was too good for his generation; and his generation took the short way, and made an end of him." I doubt if there is a single human being who will not go as far as that, who will not pay that much tribute to the character of Jesus Christ. However low you rank him in the scale of human achievement, you will put him in the same class with Socrates. Socrates went about the world trying to make people think, trying to make people see that there must be a right and a wrong way of living.... And the good people of Athens called him an atheist and made him drink poison. Five centuries later, Jesus of Nazareth came, and he taught, well, perhaps not exactly the same but the same kind of thing....being merciful to your neighbor, judging him charitably, trusting Providence, being sorry when you had done wrong. And the Jews crucified him. It is the way of the world.

And from there he goes on to look at the Crucifixion from increasingly un-natural and more mysterious points of view, ending with the acknowledgement that it is something beyond human comprehension.

I plan to read the remaining XIII chapters during Lent. 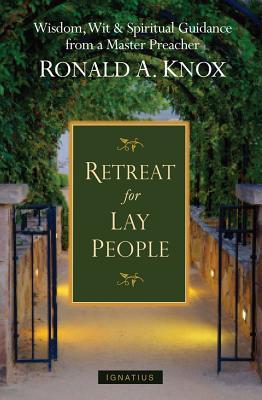 It's not exactly easy to get. You can find it on Abe books, but the only ones for $20 or less are in England or Ireland.

Too bad, but I probably have 20 books in there that will do.

That's odd. It's from Ignatius. But they publish so much, so I guess when they sell the last of a print run they don't necessarily do another, even if it's as well-known a writer as Knox.

It's okay, though. I remembered I already had a plan.

I looked for it on bookfinder.com and nothing came up. Then I realized I had typed "retread" instead of "retreat."

Heh. That might be useful, too, for us older lay people.

I'm not sure where I got the book. I didn't buy it, but it's in perfect condition. I think it must have been from a trove of books that were being given away, maybe from the same Fr. Dorrell from whom the LPs came. Or another ecclesiastical source, when a lot of books were about to go to Goodwill. Maybe it was sent to someone as a review copy and never read.

I've added a note to the post now saying it's out of print.

The hearts in front of the White House.

I guess that will shut up those people who made fun of her doctorate. Melania would never have thought of this.

"Pink Hearts Seen As Mockery of G in LGBT+"

"Hearts With Two Out of Three Flag Colors Seen As Xenophobic"

Heh. Yeah, I figured Ronald Knox was not likely to physically squash anybody. I remember hearing "I will crush you like a bug" a few times among teenage girls 15-20 years ago.