Alex Ross: The Rest Is Noise

The "About" page on this blog says that it's "Books and music, mostly." So what could be more appropriate here than a book about music? I don't actually read very many of those, and maybe I should. This one was certainly worthwhile, to say the least. Only the fact that I don't have anything to compare it to keeps me from saying that it's essential for anyone interested in modern classical music. On second thought, I'll say that anyway, with the proviso that I'm not saying it's the only essential.

Subtitled "Listening to the Twentieth Century," and published early in this century, it's a comprehensive and judicious account of the wild journey of music over the past hundred-and-some years. It's the story of both the music itself and those who composed it, in roughly equal parts history and musicology (or, as Peter Schickele used to say "musicalology"). It begins with Richard Strauss conducting Salome in 1906. Not the premiere, which had happened some months earlier, but a performance in Graz (Austria) which was attended by Mahler (and his wife, who certainly had some significance in music), Schoenberg, Berg--and, surprisingly, Puccini.

Within a few pages Ross has sketched the scene, the personalities, and the cultural situation, then delved into the work itself, from overview to musical details. It's done with great skill and clarity. The two paragraphs of musical exposition take you very quickly from a couple of fundamental concepts (the octave, the fifth, the fourth, the third) to something fairly subtle:

The first notes on the clarinet are simply a rising scale, but it is split down the middle: the first half belongs to C-sharp major, the second to G major. This is an unsettling opening for several reasons. First, the notes C-sharp and G are separated by the interval known as the tritone, a half-step narrower than the perfect fifth.... This interval has long caused uneasy vibrations in human ears....

And if you don't have the ear and the training to grasp that, and don't have a recording of Salome handy, there's a web site accompanying the book which has audio excerpts illustrating many (or all?) of the musical examples considered in detail in the text. (Click here to hear the music described above.)

Ross is a vivid, clear, and personable writer--qualities which are by no means inextricably associated with music criticism. You feel like you're listening to a very good teacher, the sort who knows his subject deeply and can communicate it effectively.

And he has another quality which I value in anyone who opines about music: openness. He seems to have no strong stake in the argument between modernist and anti-modernist camps about the viability of the traditional system of Western music, taking the music on its own terms.

Sometimes I suspect the reality of the music under discussion may not have very good terms of its own--as, for instance, the apparently respectful reference to "R. Murray Schafer's radical music-theater cycle Patria, which can only be performed in the forests and lakes of the Canadian north." I admit to being slightly curious about that. But better to err in the direction of openness than the opposite. 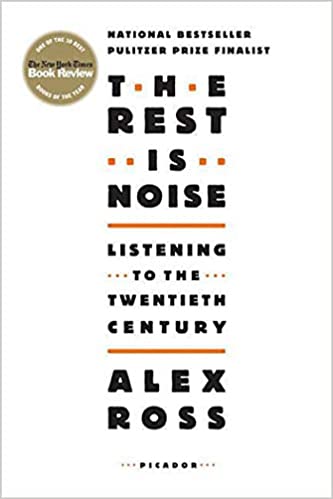 I read this book about 10 years ago and I agree that it is excellent. In his New Yorker column Ross can sometimes be self-consciously politically correct, but I didn't remember that from the book, and it's nice to have that recollection confirmed.

If you're interested, my somewhat polemical notes on the book are here.

Two other books about 20th century music which I love are the final volumes of Richard Taruskin's Oxford History of Western Music (a somewhat technical and very thorough overview) and Robert Reilly's Surprised by Beauty (an enthusiastic exploration of music from the 20th century not indebted to Schoenberg). Notes here and here, again, if you're interested. Note that Reilly's book has been re-published in an expanded edition which I have not (yet) read in its entirety.

I very much look forward to reading your notes on those books. Tomorrow, probably. The Taruskin book is probably too technical for me, but I've read some of Reilly's stuff and even taken a couple of his recommendations...which didn't quite live up my expectations.

I will probably in the end have some reservations about Ross's decisions about who and which to include. I've never heard Peter Grimes but from his description I suspect I won't think as highly of it as Ross does. And when I wrote this semi-review I found myself thinking "Shouldn't he have given Vaughan Williams more attention?"

I wrote the preceding before I read your review of The Rest Is Noise, so it was interesting to note that you specifically mention Ross's neglect of Vaughan Williams. It does seem curious, as I have the impression that he's well liked by critics in general.

On Schoenberg, atonalism, etc.: I don't necessarily dislike all of that sort of thing, but I have never been able to get much aesthetic sense from it besides those covered by words like "spooky," "anxious," "disoriented," and the like. I think that's a very widespread, if not universal, reaction. One of the very first pieces of classical music I ever really liked was Pierrot Lunaire. But I liked it precisely *because* it was weird and spooky and alienated. In that case the texts make it seem that the music is intended to affect one that way.

I had a classically-trained aunt who informed me, just as I was getting interested in classical music, that Schoenberg's theories were bogus because they ignore the physics of the tonal system. I think she was right.

There is something strangely alluring about "Pierrot Lunaire"!

I think that point is right about atonalism being at odds with something basic about physics and about the way humans understand sound.

When I saw the length of the Taruskin piece I decided to wait till the weekend to read it. It's really good, a fine piece of music criticism in its own right. I hope you're archiving your blog.

Re serialism: "It is telling, however, that these “rational structural principles” were almost always far more evident to the mind than to the ear."

To say the least. I'll take a wild guess that maybe one in a hundred people can even recall a serialist tone row after hearing it once. Maybe one in a thousand can follow its permutations in a composition. I certainly can't do either. There was a preposterous prediction made by someone in what were no doubt the early exciting days of this music that one day people would be whistling it in the streets. Well, maybe we're still just not advanced enough.

I think I was probably at least 40 before I grasped that "atonal" and "dissonant" are not synonyms.