Knowing that the film was released in 1949 made me wonder about the conditions under which it was made--I mean both the physical and psychological conditions, the war having ended only four years earlier and the country still under occupation. There is no direct reference to the war or the occupation, which seemed puzzling. According to Wikipedia, filmmakers--and everyone, I suppose--were subject to a certain amount of censorship by the Allies, which explains this curious absence. A few images like this one are implicit references to the occupation: 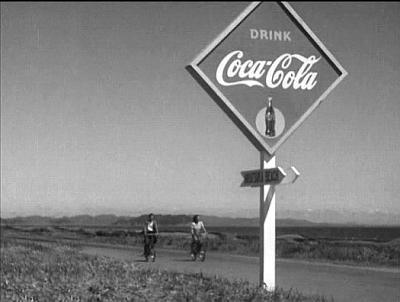 You'll notice that the sign is in English. A bit after this moment the two bicyclists pass a sign giving the load limit of the road, also in English.

The mix of western and Japanese cultures in these movies is really interesting.

Yes, and I'm pretty sure it carries a lot of significance that I don't get or even notice. Different people on different occasions may wear either western or traditional Japanese clothes.

I didn't mention, in writing about End of Summer, that a couple of Americans appear briefly, as boyfriends of a frivolous (at best) young woman. In the context it seems that this is not a good thing. It was made roughly 10 years later than Late Spring. When a Coca-Cola sign appears in it, as it does, it doesn't necessarily seem to be connected with the occupation, but rather with Americanization.

I was actually going to rewatch this this week, but I got notice from the library that End of Summer is on the way, so I think I'll watch that one first.

Just finished watching it a little while ago and found these things you mention quite interesting. The Coca-Cola sign sure did jump out at me! The absence of the man that Noriko is going to marry, as well as no wedding ceremony at the end. The long Noh performance in the middle.

I came home from work, tired, turned on TCM and it was getting ready to begin, with two more (that I have DVR'd) after. The last is Tokyo Story, which I have been wanting to see. Late Spring just moves slowly along as you watch this very insular family drama, to the point that I almost felt myself nodding off. But I did stay awake and it was quite enjoyable.

I'm currently reading a Haruki Murakami book (The Wind-Up Bird Chronicle), and some of my international students have arrived from Japan in the past few days. So this small Ozu film festival has arrived just at the right time!

Nice. I haven't heard of Murakami. Is he contemporary?

These Ozu movies are really quite slow-moving, and I would never start one past 9 or so at night. Maybe 7. But they have a cumulative effect. I'm not sure whether I like Tokyo Story or Late Spring better. I may have said at one time but that statement is now inoperative.

Last time I looked at Criterion Channel there were a lot of Ozu films. Hope they're still there. As with Netflix things come and go. I better watch some more while I can.

Yes, Murakami is contemporary. I believe he is in his early 70s.

The part of Late Spring I enjoyed the most was the little speech the father gives his daughter at the end. I don't recall everything he said, but the line that really hit me was, "I am 56 and near the end of my life". I'm 55! Of course I realize that this is post-war Japan, only a few years after nuclear bombs were dropped on the country, so a completely different perspective than modern US society.

I notice age-related things like that a lot in older movies and TV: people referred to as "old" when they're 60. My paternal grandmother died at 65 or so, when I was in my teens, and to me she had always looked "old," partly an effect of the way older people dressed then. And as is frequently noted 65 was originally set for social security to kick in because people weren't expected to live all that long afterward.

I watched the first half of Early Summer today. Seems very much like the others of the period, including having very similar characters. As usual I got confused about who was who and their relationships, so I resorted to reading the Wikipedia synopsis to get it straight. I didn't worry much about spoilers as I was pretty sure it's not a cliffhanger.