Elgar: Symphony No. 1 in Ab

I listened to this a couple of times back in January, and didn't quite know what to make of it. The note I made as a start to this post said "starts off with a noble, English-elegiac melody, and then a fight breaks out." The agitation of the first movement gives way to much quieter second and third movements, and then returns to a great degree in the fourth. That noble theme with which the symphony begins returns, too, and I thought it was going to be in triumph, but it seems to me a much more limited victory than that, unvanquished but perhaps weakened, not nearly as majestic as in the opening.

I didn't dislike the symphony, but that's not to say that my reaction simply fell in the lukewarm middle: I genuinely didn't know whether I liked it or not. I put it aside for a time, then Lent came, and I didn't listen to any secular music then. Last week I finally got back to it. And now I can say that I do indeed like it, and will probably learn to love it. Those two inner movements are quite beautiful; they just needed a few hearings to sink in on me, as is often the case. Much of it is not exactly what I expect of Elgar--there's more Romantic storminess--but that says more about my limited acquaintance with his work, and maybe with some vague notion on my part that English music is supposed to be pastoral, than about the work.

This is another LP from the Fr. Dorrell trove. It's a Seraphim recording (S-60068), but I'm pretty sure that's not the original issue, which according to Discogs was probably British and appeared in the early '60s. Seraphim, as old classical music fans may know, was the "budget" imprint of the more prestigious Angel label. I'm pretty sure my copy was produced sometime in the '60s. The cover of mine is not nearly as bright orange as this one. 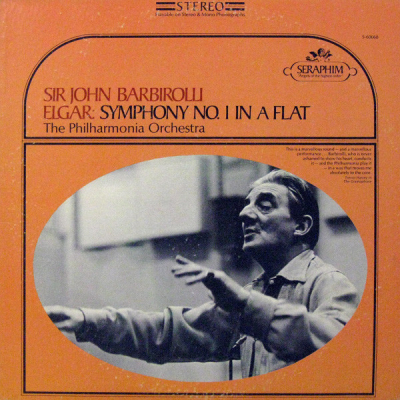 The performance is perfectly fine as far as I'm concerned. I have nothing to compare it to. The sound is pretty much the norm for its time, not strikingly good as some of these older recordings can be, but not bad.

This YouTube video seems to be the same performance.

I haven't listened to Elgar in quite awhile, but a number of years ago a friend from England brought me a CD box set of Barbirolli conducting Elgar that was difficult to get over here at the time. Since EMI eventually shut Angel/Seraphim down and absorbed their releases into EMI Classics I wouldn't be surprised if you and I have the same performance of Sym. No 1. I'll have to give it a listen -- as I said, it's been years (at least seven or eight).

Yes, surely it’s the same one.

I have a number of Angel LPs from the Sixties, maybe into the Seventies. The jacket art and design always made them especially desirable.