...and this variety and complexity, playing upon a refined sensibility, must produce various and complex results. The poet must become more and more comprehensive, more allusive, more indirect, in order to force, to dislocate if necessary, language into his meaning.

It dawned on me sometime fairly late in life that although the opening statement is obviously true, the rest of it is jive. It's Eliot justifying his own poetics as a universal principle. It's by no means necessarily false, but not necessarily true, either. One could just as well argue that the essential task of the poet in such a time is to penetrate the complexity and get at the unchanging truths which the complexity often muddles. "A time of complexity and confusion requires a poetry of directness and clarity...."

But I thought about Eliot's statement when I took a tour boat around Mobile's seaport a few weeks ago. Container shipping is apparently the way things are done now, and I think has been for some time. (Here's a recent piece in National Review with some more information about that.)

Each of those shoe-boxy containers is somewhere close to the size of the trailer of an eighteen-wheeler. What's in them? How do they (the vague "they" which we all--or at least I--see as somehow making the world work) keep track of it all, from source to destination? Those cranes are...I don't know, a couple of hundred feet tall maybe? There's a little cab that hangs underneath the horizontal part and has a driver, who runs it out over the ship and with some sort of dangling gripping apparatus picks up a container and puts it down somewhere behind the crane, where there are acres and acres of them. 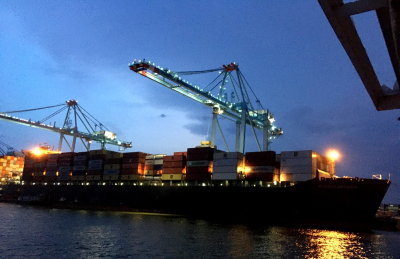 Whatever bad things one may have to say about the modern world, and I have plenty, it is an amazing accomplishment.

A year ago I probably wouldn't have specified that the Eliot in question is Thomas Stearns. But as of this past February it could in my mind as likely be George.

What fun to take a tour boat around the bay.

It was nice. Not exactly the romantic thing it's billed as, but fun. It wasn't the bay at large, just the port. Pretty industrial.

I just love to be in a boat.

How did my email address get there? Please remove it.