William Grant Still: "Out of the Silence"

I went to hear the Mobile Symphony Saturday night. It was a peculiar concert, and I'm not sure I would have gone if I'd realized how peculiar it would be. But they've had a very difficult year-plus, of course, and I wanted to support them. And although it was not the most exciting program conceivable, it included Dvorak's Serenade for Strings in E, which I like (and which I wrote about here), and which I knew I would enjoy hearing live.

The peculiarity had to do with the fact that the concert was apparently planned before the pandemic restrictions had been mostly lifted. I think this picture, lifted from the orchestra's Facebook page, tells the story more effectively than I could. 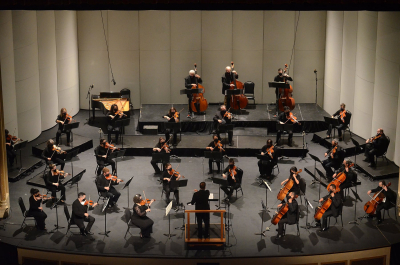 When I walked in to take my seat in the otherwise empty center section of the balcony, and saw the sparsely populated stage, I just thought vaguely that most of the orchestra had not shown up yet. That would have been pretty strange, since it was only ten minutes or so before the concert was to start. Then it sank in on me that this it, this was all there was going to be. You might have to click on the picture to see that the musicians are masked. And "social distancing" was in force for the audience as well, though it didn't really matter because there were very few people in the audience. I'd guess a few hundred at most, scattered around a hall that seats almost 2,000.

As you can see, it's only the strings, and not quite all of them. Then I looked at the program and saw that it would only be a little under forty-five minutes long. Another thing that hadn't sunk in on me was that they are presenting it four times over the weekend, obviously in an effort to compensate for the extremely limited seating.

But I enjoyed it anyway. The concert began with this little piece, which I regard as a real find. As far as I recall I'd never heard anything by William Grant Still before. If I'd heard it without knowing who the composer was I'd have guessed Delius. The strings were joined for it by a piano and a single flute.

In addition to the Dvorak, there was a Mendelssohn sinfonia for strings, a light and pretty early work which was enjoyable enough but which I'm not likely to seek out again.

I have some Still pieces scattered on a few CD's but not sure if this is one of them. I've heard those few things of his but have never followed up with him. This particular piece is a little too impressionistic for me. For some reason I've never warmed to Ravel, Debussy, Delius, etc. I get close to it with Faure and Chausson, then stop and jump to Elgar and Vaughan Williams, etc.

Yes, we've discussed Delius before. A very slight quibble with your implication that there is some sort of progress from Delius to VW et al: those two at least were within ten years of being contemporary, so I don't think it's development or evolution so much as very different gifts and sensibilities. Delius is not anywhere near as important a composer, of course, but I do like some of his work.

I agree -- I didn't mean that "jump" chronologically as much as stylistically. There was a fair amount of chronological overlap with all these guys, as you indicate.

It's funny, but when I was younger (teens/early 20's) I liked certain impressionistic works a lot. La Mer was a particular favorite. I listened to virtually no classical music in the 80's and 90's, but when I got interested again in '98 or '99 I found that I didn't like that stuff anymore. I find that a little strange. I know tastes change, but how, when I wasn't even listening to it during that period?

I don't think I've ever had such a change of heart in the realm of classical music, either progressive or after a long absence, but certainly in other arts. "Why did I ever like this?" It happened to me with science fiction.