A Note On Dashiell Hammett's Novels

I feel like I should like Dashiell Hammett more than I do. Back in the '70s sometime I discovered Raymond Chandler and pretty much fell in love with the kind of detective story that he wrote: "hard-boiled," but with a vividly poetic streak. And I expected to like Dashiell Hammett just as much. I think I had already seen the famous movie of The Maltese Falcon, and one of the Nick and Nora Charles "Thin Man" movies. I suppose I was thinking that Hammett would be much like Chandler, and very much in the Humphrey Bogart, film noir style of The Maltese Falcon.

I consider Ross Macdonald the great master of this style, and I think it was before I had read Hammett that I came across something by Macdonald which seemed to say that Hammett's work was superior to Chandler's. (I put it that way--"seemed to say"--because it was a long time ago and I'm not certain where I read it.) So around that same time I read, if I remember correctly, The Thin Man and The Glass Key, and was somewhat disappointed. They were good stories but they didn't have the mood and color of Chandler, much less of Macdonald, and nothing close to the psychological depth of the latter. Considering my respect for Macdonald's opinion, I figured it was my problem, that I was missing something that he saw.

Some years later I acquired a one-volume collection of Hammett's novels (there are only five), and quite a few years later--within the last twenty years--I finally gave him another try and read Red Harvest. Again I was disappointed. It was a wild story, involving a sort of labor-related gang war in a Western town. But it didn't strike me as being anything very special from the literary point of view. I can read Chandler and Macdonald over and over again, but I've never reread Hammett.

A few weeks ago, having some kind of inclination to try again, and wanting to read something relatively undemanding, I read The Dain Curse, and once again failed to sense the genius that some apparently see in Hammett's work. In fact for somewhere around half of it I was mildly annoyed. It was written as a four-part magazine serial, and it shows. Each of the first two parts is a story that more or less stands alone. Crimes occur, and the detective--the nameless employee of the Continental Detective Agency, the "Continental op[erative]"--solves it instantly and to my mind not always plausibly on the basis of a few details.

It's a story of complicated evil deeds, and an interesting set of puzzles, but it didn't engage me much beyond the basic what-happens-next narrative pull. I've never cared much about the puzzle-solving element of detective fiction, and I didn't get very involved with the characters, or get any sense of, for lack of a better term, philosophical depth that I find in Macdonald and Chandler, though to a lesser degree in the latter.

So I remain unappreciative and unenthusiastic about Hammett. Next time I get the urge to read something of this sort I'll revisit one of those I read in the '70s--or The Maltese Falcon, which may or may not be a revisiting. I'm embarrassed to say that I honestly can't remember whether I've read it. I sort of think I have, but if I did the movie, which I've seen at least twice, has overwhelmed it in my mind. 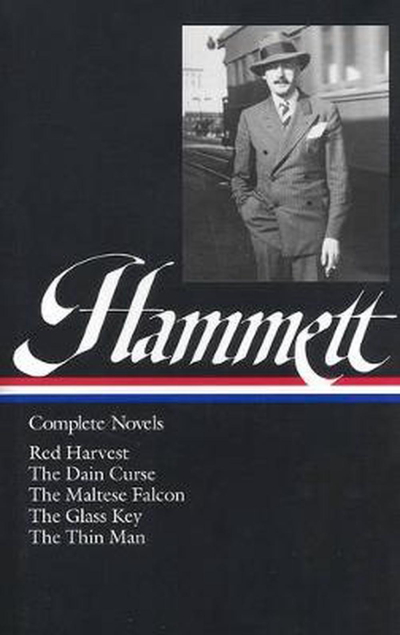 This is not the edition I have. This is the Library of America edition. Maybe if I read this one I'd be more impressed.

I've never read Hammett but if memory serves Red Harvest may have been the inspiration for Kurosawa's Yojimbo, which in turn fueled Leone's A Fistful of Dollars.

Apparently Kurosawa said so, but some say Yojimbo is actually closer to The Glass Key. I haven't seen Yojimbo.

Here's a very interesting discussion. From a more civilized Salon:

I had of course though lamentably forgotten about that. It’s good. Thanks.

I only remembered it because I wrote it. :-)