Light On Dark Water
Home Archives About
Martin Phipps: From the Soundtrack of The Crown
A Note On Dashiell Hammett's Novels

I'm actually not a grammar martinet, although it may sometimes seem that way. I've never paid a lot of attention to rules of grammar, not in the sense of being able to state them, and talk of verb tenses and such usually confuses me. It's just a matter of what sounds right or wrong, very much like hearing the right or wrong notes in music (leaving out the case where the "wrong" one is deliberately used, or the whole idea of wrongness is being subverted). Certain grammatical errors give me something like the pain of hearing a bad mistake in music.

One of these is the "lie-lay" distinction. I can't quote the rule that governs them, but I know that "I'm going to go lay down" hurts my ears. This is now so common that the incorrect use probably occurs more frequently than the correct. The trend has been in place for a long time now. There were always a fair number of people whose native usage, so to speak--what they had grown up hearing--was the incorrect one. Teachers tried to change them, but it didn't always work (to say the least). I remember when I was getting physical therapy for a back problem thirty years ago that the therapist would instruct me to "lay down" and do this or that exercise.

So I thought I was pretty much reconciled to the fact that this is a lost cause. But I had that realization driven home definitively a few weeks ago when I read a sentence written by someone with a PhD that went something like this: "Beneath this concern lays this other concern...". It was not a PhD in science or engineering where language is merely functional, but in theology, where words are hugely important. (I do know where I read it, and just checked again to make sure I wasn't misreading the text, but am not going to identify it, partly because I see no reason to expose the writer to ridicule for his grammar or myself to ridicule as a grammar martinet. Anyway, it's possible that it was only a typo.)

Anyway, I think that use of the word "lie" is actually passing out of use altogether, with only the other word, "lie" as in "speak falsely," remaining. Well, it's certainly a word to which we need to resort quite often. 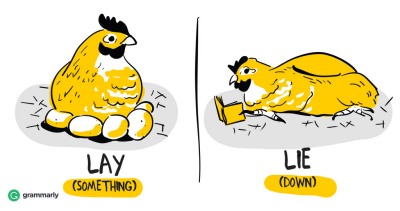 
EVEN THOUGH IT'S REALLY NOT THAT COMPLICATED IS IT?

The older I get, the more I have to stop and think about these things. I say to myself, "I know one of these is wrong, but I can't remember which. Both sound wrong." Part of that is probably because I hear it incorrectly so often.

I have also given up on "me" vs. "I." Should that period be inside the quotation marks?

I notice the same thing. There was one just yesterday...but now I can't remember what it was, which is another the-older-I-get thing.

This one was also yesterday, easier to remember because it's from a song:

"Till the stars fall from the sky
For you and I"

I was taught that the period goes inside in that case. Which always bothered me because I don't think it makes sense. But the result is that it looks wrong if I put it outside. Can't win that one.

I know you always put it inside for something like that. What I don't know is if you do that when you are putting quotes around a single word or short phrase, not to quote something, but to indicate that you are talking about that word.

BTW, I am pretty sure I have never seen a chicken lying in that position, even a dead one. It is lying illustration.

Oh, I see. I would suppose that the same rule applies, but I don't know.

I'm pretty sure chickens can't lie in either sense of the word.

Once I got stuck next to a huge truck full of chickens in a traffic jam in Birmingham. Some of them were lying on their backs with their little legs in the air.

I don't think I've ever had trouble with me and I (and I certainly don't have trouble with the ABBA song "Me and I" - sorry). I certainly had that straight by the end of 7th grade, where Sr. Chrisann had us copy grammar rules off the overhead projector. And then when I got to high school and took Latin it became absolutely clear. I try (usually unsuccessfully) to not let it bother me when people get that wrong. But, there was a priest, who witnessed my marriage, and baptized my son, both in the Extraordinary Form (if we still say that), who always used "I" when it should have been "me." I could never understand how someone who knew Latin could get that wrong (not that I'm ascribing any merit to knowing Latin - it's just that understanding cases is so central to the language).

Cringing at "she and I" is something I reserve for my wife, who also cringes.

I can sort of see how one could know Latin and yet mangle case in English. If I remember correctly Latin is way more structured in that respect. English is so inconsistent. I'd hate to have to learn it.

Case really only matters in English for pronouns (oh, that troublesome part of speech!). I wouldn't say that English is "inconsistent" so much that word order matters more than form (except for pronouns, which is inconsistent :)).

Maybe it's just me, but it took me a long time to understand that in "'Til death do us part", "death" was the subject and "us" was the object. Before I thought about it, it always seemed like "until we part at death" or something.

What about effect and affect. I think it is best to just not use either. Or perhaps just use one and ignore the other and any possible consequences. ;-)

Oh Stu, I always have to stop and think about those. I know which is right, but I have to reason it through. Ten years ago, it came naturally.

To get effect and affect right I just think of the meaning of "effective" and "affective."

My theory is that people get cases wrong because as children they were corrected for saying, "Me and Pat went to the park." They absorbed that you're supposed to say, "Pat and I" when you want to say, "Me and Pat," so now they say, "She bought ice cream for Pat and I."

In fairness to the poorly-educated, lay/lie is not as simple as the cartoon suggests, because the past tense of "lie" is "lay." But I've seen it used wrong in print from outlets that should know better.

I think that's exactly it, Anne-Marie--about "me and", I mean. The lesson learned was "don't say 'me' when there's another person included."

I suspect that "lay" as past tense of "lie" is really at the root of the problem. At some point the collective unconscious just said "oh the hell with it." :-)

And by the way I have a soft spot for "me and him/her/them". Just like the sound of it.

I'm somewhat like Janet with "affect" and "effect." I never used to have a problem, but many years of seeing them used incorrectly, plus age, have now caused me to question myself when I write them. "Wait, are you sure that's right?"

I think I parsed out "till death do us part" quite early. I liked it, still do. It's poetic--musical and emphatic. Much preferable to any simplification, such as "till death parts us."

To say nothing of "till the feeling is gone."

Thus we have, "Bob and I's car." The epitome of the grammatical equivalent of fingernails on the blackboard.

If I had not been in a bit of a hurry earlier I was going to mention that, though not for exactly the same reason. It doesn't so much annoy me as fluster me when I'm in the position of needing to refer to "the car that belongs to Bob and me." There is really not a good standard and non-clumsy way to say it, at least to my ear. I'm not even sure what's grammatically correct. I guess it's "my and Bob's car," which sounds awful. Best to avoid the need.

Bob's and my car. You put yourself last.

But it's the official, absolutely correct way. It is the way of perfection.
;-)