If this doesn't give you the creeps...

...it probably should. This of course is from the Department of Homeland Security. 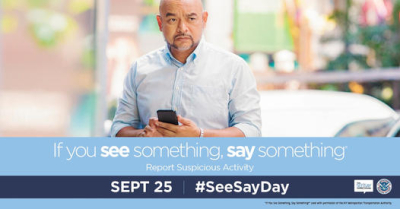 I cringed when the Bush administration created DHS. Apart from its ominous name, it seemed an admission that the Department of Defense is not primarily about defense, and that the existing law enforcement and intelligence agencies weren't up to the job. Now that the Washington establishment, with help from some Trump followers, is trying to make the case that right-wing "extremists" pose a major threat to the nation, this kind of thing is more unsettling than ever. Even parents yelling at school boards, when the complainers are on the wrong political side, are now open to some very unwelcome attention from the FBI.

I'm sure there are some violent right-wingers out there, but the FBI and others managed to keep the Klan, the Weathermen, and other domestic outlaws in check back in the '60s and '70s. More, and more politicized, federal surveillance and policing are not comforting thoughts now. You could hardly ask for a better definition of mission creep, or a better example of the tendency of any government department to expand indefinitely, than the DHS Focus page, which lists climate change and COVID-19 as "part of the department's mission." Meanwhile, the southern border is porous, to say the least.

I hope that guy doesn't live in my neighborhood. If I see him I'm going to report him. He makes me feel unsafe.

I'm a bit flummoxed by the fact that so many liberals and leftists who were rightly concerned about the Patriot Act are just rolling over in the face of this bio-political hygiene regime. There are a few out there who are saying "Wait a minute!" but not many, or if there are more they're not being heard.

One could say a whole lot about that, but since I'm tapping this out on a tablet I'll just say that it's a good example of the hive mind at work.

We love you, Big Brother!

Apparently so. It's the old hippies who have shocked me. People who used to like to scare themselves with stories about the evils of the FBI and CIA in the '60s, and Bush 15 years ago, don't seem to be bothered by this kind of thing. Or suspicious about Big Pharma and the vaccine, etc. Or especially worried about big business, except to the extent that they still live in the old world where big business = Republican.

But this isn't something new. The campaign itself has been around since 2010, and the very first Sept. 25 “If You See Something, Say Something®” Awareness Day was in 2018. https://www.dhs.gov/news/2018/09/25/department-homeland-security-launches-first-national-if-you-see-something-say

Oh, I know. They were using that slogan not so long after 9/1, iirc. I thought it was creepy then, but it's a lot creepier now that the various agencies are saying that the real enemy is within. I copied this graphic from Facebook, which made it even more startling because Facebook is constantly flagging right-wing views as "false or misleading", but letting left-wing ones stand. Seeing DHS ads on Facebook is definitely new, at least for me.

Yes, this is on a continuum with the Patriot Act -- it's not a separate phenomenon. The difference is, as Mac says, that this time around we're being told to be suspicious of ourselves, as opposed to some shadowy "other."

Just finished reading Byung-Chul Han's little book The Palliative Society. He argues that since modern man (The Last Man) values comfort over freedom, and has developed a sort of mania and "internal dictatorship" over health and hygiene, he will not perceive the new biopolitical surveillance as oppressive, since "it comes in the name of health."

Han says that Western liberalism finds itself troubled by biopolitical surveillance, but liberal ideas of freedom have already been undermined by surveillance capitalism, such that when the expansion of surveillance moves forward in the name of health, liberalism will fail to rise to the challenge. As he puts it in a very trenchant question, "Why should this enormous apparatus of digital surveillance, already implemented and meeting little resistance, stop short of the virus?"

I'm no leftist, but this analysis seems fairly on target to me. And it's interesting that it's the true leftists (not left-liberals) and true conservatives (not right-liberals) that have picked up on this, even though they're coming at it from opposite directions. The left- and right-liberals so far seem mostly oblivious to the thing, wrapped up as they are in their anti-vaxx and anti-anti-vaxx bubbles.

I wonder how much liberalism is even troubled. Personally I don't see much evidence of it but that may well be just a matter of what I happen to run into. I certainly haven't seen any indication that liberals/leftists of my acquaintance have any objection to the vaccine passport idea.

I see it (the whole syndrome) as having to do with safety rather than comfort, though obviously those are related. The thing is, the anti-covid extremists--the most extreme I've seen advocated freezing the assets of those who refuse to get vaccinated--would have a fair point if this were a plague as deadly and uncontrollable as the black death was in the middle ages. And that's the logic they use. And it's logical! But the pandemic is just not even remotely in that ballpark. It seems that way to people (I'm guessing) for whom "safety," however conceived, is some kind of ultimate value. No risk whatsoever apparently is tolerable.

The DHS stuff in particular though--the redirection to internal enemies, the DOJ threatening dissident parents etc.--really has more to do with the desire to delegitimize and silence opposition to what someone has called "the successor ideology." It's pretty straightforward in that sense. The appeal to "safety" there is a tactic.

"I wonder how much liberalism is even troubled. Personally I don't see much evidence of it"

In context I think he means that consistent liberalism is troubled, or at least should be. Italian political philosopher Giorgio Agamben makes the same observation about the Left. Measures that they would have loudly decried for any other reason get a pass because of "health."

"I see it (the whole syndrome) as having to do with safety rather than comfort, though obviously those are related."

I think Han would agree -- he sees "comfort" as being free from stress and pain, and lack of safety brings both.