Light On Dark Water
Home Archives About
Why We're Divided
If You've Thought About Subscribing to the Criterion Channel...

By an appropriate coincidence, on the same day that I did that last post the new issue of The Lamp arrived. It includes an essay of mine which discusses the development of the counter-culture of the 1960s toward the current culture war, and the post reiterates a point made in that piece:

The essential feature of the youth rebellion of the Sixties is that it arrived at the point at which the simultaneous decline of Christian culture and the rise of secular materialism produced a mass movement which was in fact a new ersatz cultus, the Great Awakening of a religion of human liberation. It has attracted converts ever since and gone a great way toward converting the culture of which it is an antagonist, recapitulating the conversion of the Greek and Roman world to Christianity. It is for many a feverishly impassioned faith. Like the Church it looks with fervent longing for a world to come. If it stops short of explicit utopianism, it nevertheless postulates an “arc of history” which is an asymptotic approach to utopia.

My title for the piece was "What Happened in the 1960s?" The editor(s) changed it to "What The Culture War Really Is," which I didn't quarrel with. ("Ersatz cultus" also is the editor's phrase, not mine--I just said "religion.")

It was originally a chapter in the book for which I'm currently trying to find a publisher. My initial intention and ambition for the book was that it would be a combination of personal and cultural history, part autobiographical narrative and part discursive reflection and/or analysis of the times. Reactions from the people who read it either suggested or stated outright that I hadn't really unified those two aspects, and I think they were right. And among other things the book was way too long, and so I removed a lot of the discursive impersonal stuff, like the chapter which became the essay on the Sixties.

What's left is basically a memoir, and I think there's an oversupply of memoirs these days, so I'm not very optimistic about getting it published. Yesterday I ran across this rather wonderful quote from Wittgenstein's introduction to one of his own books:

I should have liked to produce a good book. This has not come about, but the time is past in which I could improve it.

That's something like the way I feel. I don't think I can rewrite the book as it now stands in such a way that it would be greatly improved, though I have not stopped fiddling with details, and will soon try sending this new version to a publisher.

Though I had excised that one chapter, I thought it was worth preserving. I cut it down from its original 7,000 or so words (by removing personal stuff) to 4,000. Almost exactly 4,000, in fact, which I know because I aimed for that in order to get it down to the maximum word count for First Things, thinking it might be something that would interest them. Well, it didn't. Nor did it interest several other conservative/Catholic publications to which I submitted it, so I put it on this site for a while. Perhaps you read it.

Then Robert Gotcher told me about a new Catholic magazine called The Lamp. It looked interesting, and they were (are) considering unsolicited work, so I sent the piece to them, and somewhat to my surprise they accepted it. At that point I took it down here.

The Lamp is an interesting publication, describing itself as "A Catholic Journal Of Literature, Science, The Fine Arts, Etc." It's eclectic to say the least. I'm tempted to add "to a fault," and very handsomely produced. It is, however, a bit pricey at $60 for a print subscription, $45 for digital. You can read their editorial statement here. And here is a list of the issues. I'm pretty sure that you can read them online if you register first. It will offer to link your registration to your subscriber account, but you can close that tab, go back to the issues page, and view the articles. I think. 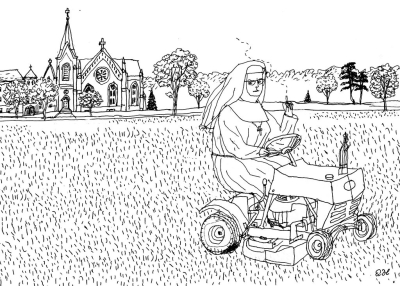 Cover image from the current issue. I think it's great.

Posted at 02:37 PM in Catholic Stuff, Politics, Religion, State of the Culture, What Is Actually Happening | Permalink | Comments (4)

I'm sure I read it first time around, but would like to read it again.

Funny, just the other day I was looking at my copy of your first book and wondered about the progress on the second. Thanks for the update.

Never heard of The Lamp before, but it looks appealing. I can think of at least one person for whom it would make a good Christmas present, too. Thanks!

You're welcome. Hope he or she enjoys it.