"The Raven" Is A Great Poem

A train of thought that began with my noticing that in a few days it will be December eventually carried me to these lines from "The Raven":

Ah, distinctly I remember, it was in the bleak December
And each separate dying ember wrought its ghost upon the floor...

I hadn't read the poem in I don't know how long, so I pulled out my old Norton anthology of American literature and did so. Oh my goodness! As a reasonably sophisticated reader of poetry, I'm probably not supposed to think very highly of "The Raven," but...oh my goodness, it's a fine one.

Yes, it's gimmicky, and somewhat over the top. Okay, more than somewhat. Musically it tends to produce a naive sing-song effect, with its heavy trochaic rhythm (DAH-dah-DAH-dah), its plentifully repeated feminine rhymes, and entire repeated phrases. The lines are eight feet long and the internal rhyme makes most of those effectively two lines, but running them together is a brilliant move that gives them speed and reduces the possible nursery-rhyme effect. And it's almost absurdly melodramatic; the atmosphere is laid on very heavily, so that it's easy to make fun of, and of course has been. But if you read it aloud, try not to let the beat run away with you, and discard the cynicism that might lead you to mock it, it's hard to resist.

And why should one resist? Do you resist Chopin's Funeral March? If so, it's probably for some of the same reasons: a perception that it's cheesy, which is as much a result of over-exposure, parody, and perhaps snobbery as of any fault within the work. Works like this are in a sense too good, or rather I guess I should say too appealing: almost everyone finds them accessible and enjoyable, and that can lead to their being overexposed and devalued. I'm reading "The Raven" now as if I were in the 8th grade, or whatever it was, again, and realizing that I was right to love it then.

Naturally there are some readings of it on YouTube. I sampled three--by Christopher Lee, James Earl Jones, and Vincent Price--but I don't recommend them, so am not including them here. In general to my taste actors act too much when they read poetry, reading "with expression," as someone says with annoyance in some story or other--too much expression. It's as if they're trying to upstage the poet. I have to say though that the Vincent Price one is sort of fun. It's not just read but dramatized, with thunder, purple curtains, a skull sitting on Price's desk, and an actual raven, which however does not speak. 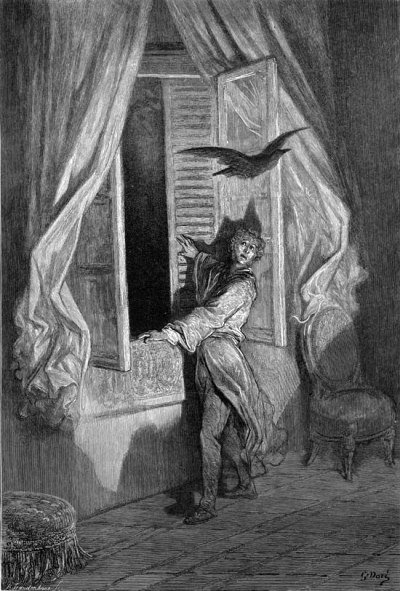 Yes it is! I fell in love with it around the 8th grade, and I'm still in love with it. I loved it so much I committed into memory. As I did The Bells. I liked that ghoulish, gothic sense in Poe. Later at college I found the Poe Cottage was nearby. I'm not sure if this is true but the story went around that the bells at Fordham were the inspiration for his eponymous poem. He was known to visit the Jesuits there, had use of their library, and the sympathetic ear of a French-speaking priest. I think his visits there followed the death of his wife Virginia. I always felt he was haunted somehow.

I'm impressed that you memorized it. I briefly considered trying that on Sunday when I read it, but aside from the fact that I don't want to spend that much time on it I'm not sure I'm capable of it now. It's really too long for memorizing for me. I think Yeats's "The Second Coming" may be the longest I ever memorized.

I read the little bio in Norton and was surprised to see a reference to Fordham as being outside the city at the time. I always had the impression that he was from Baltimore and lived most of his life there, but mainly he just died there. :-/ He was definitely haunted.

I like the illustration. Other than poems, I have never read any Poe. Several years ago Margo and I were in Baltimore and went looking for his grave. It was located on an odd corner in the downtown area, fenced in by concrete and ornamental metal, and also closed. A man who appeared to be a transient limped over to us and handed Margo a leaflet about when the graveyard was open. We didn't manage to get back there, but at least I am left with this anecdote to share.

I think Baltimore makes a fairly big deal out of claiming him. It's a bit of a letdown to me that the grave is downtown--I've always imagined it being sort of remote, without wondering how that could be if it's in a big city.

You should read some of Poe's fiction! After reading "The Raven" the other day I read "The Cask of Amontillado." Still gives me chills. "For the love of God, Montresor!"

There used to be a mysterious person who drank a toast to Poe in cognac at his grave every year on his birthday, then left the open bottle, a note, and three red roses. No-one ever figured out his identity.

Oh yeah, I remember reading about that. Very romantic. Surely someone followed him and found out who he was? Though if someone did it would have been sporting to keep the secret. Surprised no one took up the custom when he stopped.

There's a Wikipedia entry on the "Poe Toaster," which has this:

"According to eyewitness reports and notes accompanying offerings in later years, the original Toaster made the annual visitation from sometime in the 1930s (though no report appeared in print until 1950) until his death in 1998, after which the tradition was passed to 'a son'. Controversial statements were made in some notes left by the post-1998 Toaster, and in 2006, an unsuccessful attempt was made by several onlookers to detain and identify him. In 2010, there was no visit by the Toaster, nor has he appeared any year since, signaling an end to the 75-year tradition. ...

In 2015, the Maryland Historical Society organized a competition to select a new individual to resurrect the annual tribute in a modified, tourism-friendly form. The new Toaster—who will also remain anonymous—made his first appearance during the daylight hours of January 16, 2016 (a Saturday, three days before Poe's birthday), wearing the traditional garb and playing Saint-Saëns' Danse macabre on a violin."

Aw...that takes a lot of the fun out of it, making it into a tourist thing. I doubt the original toaster would have approved. Best would have been never to try to find out who it was or anything else, and just let it end with the presumably original guy.

I had no idea it went back to the 1930s. After the "controversial" statements: " A final note—left sometime between 2005 and 2008—was so dismaying, Jerome said, that he decided to fib and announce that no note had been left. " But following the link to a news story about that doesn't say what was so dismaying.

Sounds the original Toaster's son wasn't faithful to his father's idea.
Making it tourist attraction is lame in the extreme!

Apparently the notes were topical bordering on trivial--stuff about current politics and sports. Unworthy of the original toaster, for sure, and even more so of Poe.