A Note on Period Performance

The struggle between those who think baroque and earlier music should only be performed with period instruments and style (as best the latter can be surmised) and those who think that's faddish nonsense producing dry, thin (or worse) performances can be somewhat bitter. I don't take a definite position, as I think there's something to be said for both. I have two recordings of Bach's St. Matthew Passion, one more in the "modern" period style (Suzuki and the Bach Collegium Japan) and one in the "traditional" modern style (Klemperer et.al.). I hope that way of putting it makes the controversy seem a bit ridiculous: the two recordings are very different from each other, and I love both of them.

That aria from the St. John Passion sung by Krista Ludwig (see previous post) obviously comes from a recording which is in that second camp--lush, rich, expressive, maybe even "romantic." Not owning a copy of the oratorio, I thought I might buy the, or a, recording which includes Ludwig. As far as I can tell there is only one, recorded sometime in the '60s with the Berlin Philharmonic conducted by Karl Forster with the choir of St. Hedwig's Cathedral. It's apparently out of print but I was able to locate it on Discogs and Amazon. Used copies can be had, both CD and vinyl, at reasonable prices. 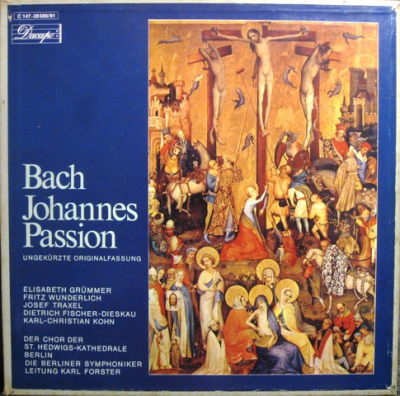 Trying to decide whether the overall performance is well-regarded enough to warrant buying it, I looked at the user reviews on Amazon. And I found a lengthy note from a Bernard Michael O'Hanlon which makes the anti-period argument very amusingly.

"Goodbye to all that!" I muttered as I broke open the top of the tunnel. As far as I could tell, I was twenty metres beyond the barbed wire. Behind me lay Stalag Jeggy. For the past twenty five years I had been incarcerated inside this hellhole. The facility itself was owned and operated by SPECTRE (Sinister Period-Practice Enacted to Counter Traditional Readings Everlastingly). The Kommandant, whose hauteur was legendary, had tormented us incessantly by playing his speedy, dry-as-dust performance of the John Passion over the loudspeakers, punctuated by the occasional sea-shanty from Percy Grainger. Nor was he averse to reading out favourable reviews of his recordings from the Gramophone. Adding to our anguish, the chaplain of the Stalag was Father Melchizedek (O.P.), who also served concurrently as the High Priest of HIP. There had been tension between this cleric and the Kommandant as the latter had used a choir to scratch out his bloodless rendition of the John Passion whereas Father Melchizedek dogmatically insisted upon one-voice-per-part. In consequence, both parties took out their frustrations on the inmates. Devil's Island was Club Med in comparison.

The escapee goes on to discover a copy of the Forster recording. I take "Jeggy" to be a reference to John Eliot Gardiner. "HIP" seems to be meant to be an acronym but I don't know what the letters stand for. You can read the rest of the story here.

When CDs were new, my father let us buy some CDs. I got a random CD the Brandenburg Concertos. No pops or clicks, but it wasn't as good as the vinyl my father had (Karl Richter). Too slow. So I looked for something with a bit more verve. I found Trevor Pinncok with the English Concert orchesra, who used period instruments. I found them by looking at the times to find something quick. I like the Pinnock/English Concert perfomance. But a few years later Richter's recordings came out on CD, and I like those much better. The tempo is similar, but there is a depth to modern instruments that is missing in period instruments.

And then there is the controversy between the "traditionalists" and Virgil Fox...

I don't know about that last thing. I know Virgil Fox is an organist but I didn't know there was a quarrel there.

Sometimes the smaller ensembles that tend to be used in period performances can make things clearer. That's the case with the two St Matthews that I mentioned. The Klemperer is richer but almost muddy in comparison with the Suzuki.

Virgil Fox was a bit eccentric...

I got seriously interested in classical music around the same time that CD players were first starting to get popular and somewhat affordable. There weren't a whole lot of pop and rock CDs available at that time, so some of the first CD's I bought were classical ones. Those Pinnock Brandenburgs were among the very first.