I have a soft spot, a very soft spot, for minor and neglected artists. There is a great deal of overlap in the two categories. The minor artist--meaning one who has some significant accomplishments, but smaller in number and/or scope than those of the artist acknowledged to be "great" or "major"--is often neglected. And the neglected artist is almost by definition minor, as I don't think it very likely that there are any great artists who are little known. For some reason these lesser lights are very appealing to me; I'm excited when I find them, and enjoy telling people about them. Perhaps it's just a certain sympathy for the underdog, for the person who's good at something but always in the shadow of those who are better, and who strikes me as deserving more. Perhaps it's in part because the genius of really great artists, the ones on the level of Bach, Shakespeare, and a fairly limited number of others, seems beyond human, beyond anything that I at least can really imagine being able to do. The minor artist seems more like the rest of us; or, more pertinently, like me. I can't imagine being able to write Shakespeare's plays. I can imagine writing a handful of poems worth preserving.

This album is one of those minor but exciting finds. I came across it in the cutout bin of a record store quite a few years ago, most likely before the turn of the century. It had been released in 1990 and presumably run whatever commercial course it achieved when I discovered it. The name of the band, the title of the album, and the cover intrigued me. I may also have noticed and been intrigued by the name of the record company, C'est La Mort.  It seemed nice and gloomy and was cheap enough to be worth a try. I may have paid a dollar for it, probably not more than two. And I liked it right off. As it turned out, the first track, "Losing Ground," is my favorite:

I love that desperate, anxious vocal. As this track suggests, if you want to label the band and the album, "goth" would be the appropriate tag But really no more than about half the songs fit there. The second track, "Now," is strikingly different:

"When I Loved You" sounds like it fell off some album of the late '60s, perhaps a pretty little song inserted between the long jams of a prog band. It reminds me of something but I can't quite place it. And one track, "Blue U," is not a song at all, but an aimless sort of jam with some chatter in the background. I speculate that the range of styles might have hurt the album's commercial potential.

The band may never have become really famous, but it hasn't been totally ignored, either. As you can see some of this album at least is on YouTube, and AllMusic has an entry for them, and rates this album and its follow-up, Style Monsters, very highly (four-and-a-half and four stars, respectively). The AllMusic reviewer compares the group and this album to the work of This Mortal Coil. That is very high praise, and apt. It doesn't sound like any particular TMC track, but the general vibe and aesthetic are similar. But TMC, which was basically a studio project run by a record label, 4AD in its heyday, had the benefit of a wide area of brilliant songs to cover, or rather rework, and brilliant singers to sing them. So while Farewell Street is more limited and not as good as, say, Filigree and Shadow, it does have several five-star tracks, and a number of very good ones.

Here is AMG's review of Farewell Street, and here the review of Style Monsters. I have not heard the latter but I plan to do so in the near future. Both appear to be out of print, but are readily and reasonably available (see Discogs). And you can buy it on MP3 from Bandcamp. I just bought Farewell Street from there, in fact, and paid more than the listed price in appreciation of the pleasure I've received from my $1-2 purchase, which got the band nothing. Apparently there are two more albums, but I can't find any information on them.

Because it has fifteen tracks that run almost seventy minutes, I assumed that Farewell Street was only issued on CD. So I was surprised to see on Discogs that it was issued on vinyl. Those were the dying days of vinyl, or so it seemed at the time, and I think it was still pretty frequent for new music to appear in both formats (and cassette as well). The LP is four tracks shorter. Its cover is monochrome, not having that purple-pink overlay that the CD cover does, and I think it's better that way. 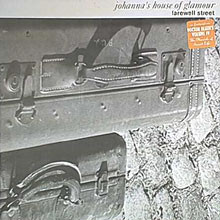 Never heard of these guys but both tracks are pretty interesting. Will have to listen further. I've never been particularly interested in goth, but I do like a few bands that might be considered goth-adjacent, which seems to be where this band might be located.

Thanks for the lovely review of my band Johanna’s house of glamour . The 1990’s where a really fun time for us . All of Johannas album have been Ed-mastered digitally . My wife and Johannas house singer died in 2015 . My current band the pull of autumn has 3 album’s you can hear on bandcamp . Thanks again for the kind words.

You're very welcome. Thank you for the music. I've listened to the album a couple more times since I posted this and like it even more. My sympathy on the loss of your wife. She had a very distinctive and affecting vocal style. I definitely will give Pull of Autumn a listen, as well as the other Johanna's House albums. It was good to hear from you.