My first impulse was to begin this post with "If you only read one book about Newman...." Then I realized that I'm not in a position to say that, as it is the only book about Newman that I've read. But I will say at least that I don't feel any need to read another.

I'm not fond of biography as a genre: it tends to be dully written, and to include more mundane detail than I really care to bother with. I'm looking across the room right now at a biography of Auden that I picked up off the discard shelf at the library, and asking myself whether I really want to read it, or perhaps should return it to the library to be re-discarded. This one, however, like the Knox brothers biography that I wrote about a while back, is the work of a very good writer and is enjoyable on its own merits. (I base "very good writer" on this book alone--I recognized Ó'Faoláin's name as a writer of fiction, but had never read anything by him.)

It's not a full biography. It's primarily the story of Newman's departure from the Church of England and entry into the Catholic Church at the age of forty-four, with the almost forty-five post-conversion years seen only in a brief and poignant epilogue. One doesn't even need to have read the Apologia to know that basic story, and even if one has, there is (of course) a great depth which is not sounded there. Ó'Faoláin shows us Newman in the midst of a family to which he has deep emotional ties and a continuing direct involvement with his siblings and other relatives up until his conversion, when a deep and permanent estrangement took hold.

The Apologia is mainly a religious and intellectual autobiography--not exactly a spiritual autobiography, either, as it does not emphasize Newman's interior spirituality. I'm tempted to say that Newman's Way complements the Apologia as an emotional biography, but that's not exactly right. Though it does emphasize the emotional currents that helped to propel Newman on his way, the portrayal of those is closely integrated with the man's pursuit of the great question, and the great decision that was the end of it. The Little Flower's title fits: this is the story of a soul. The influence of personal matters is not trivial in itself and not insignificant in a consideration of Newman's thinking. I think I know enough of that to say that his own life was in a sense an instance, or an example, of the concept of development as revealed in the Essay On the Development of Doctrine. His abstract thought was not really, or not only, abstract, but rather a manifestation of his very life in its fullness, comprehending not only reason in the narrow sense, but the entire web of perception and the mind's working thereon. He only seems abstract because he happened to be a man to whom thought was as real as walking.

It was a little surprising to me to learn that Newman's family was not especially well-off. It had come up considerably in the world over several generations preceding his own, and his father had risen as far as becoming a banker. But the bank failed in an economic panic, and the family fell back to a sort of lower middle-class level--I mean that not in the sense in which we use it now, but relative to early 19th century England, when "the middle class" was considerably more affluent than most, only not part of the aristocracy--the sort of families portrayed by Jane Austen. This relatively less-well-off position seems to have been something of an embarrassment to Newman, especially when among his fellow fellows at Oxford; Ó'Faoláin recounts a cruel moment when a don embarrasses Newman by correcting his choice of serving utensils in front of the whole table, an ugly example of formal etiquette serving bad manners.

It was also surprising to learn that Charles Newman, one of J.H. Newman's two brothers, was eccentric to the point of near-madness, and spent his whole life bouncing from one difficulty to another, frequently bailed out financially by John and the other brother, Francis (Frank). It was less surprising that Frank was a low-church Anglican clergyman, and that past a certain point in John's evolution the brothers could hardly speak to each other, and then only by sticking strictly to everyday matters and avoiding the big questions--a situation familiar to many of us, now probably more often due to politics than religion (but then part of the problem is that politics is religion for many). His relationship with his sister Jemima, seven years younger, seems to have been, at least in adulthood, the closest and most durable of his sibling relationships (there were three sisters, one of whom, Mary, also the youngest of the children, died at nineteen). But even Jemima ceased to invite him to her home after he became a Catholic.

I had read somewhere, perhaps in the Apologia, Newman's lament that he had given up almost everything dear to him when he left Oxford and Anglicanism. But I had not grasped the full pathos of it. Ó'Faoláin vividly communicates the deep attachments which Newman knew himself to be severing when he took the big step. And, just as vividly, he communicates the theological issues, which, abstract though they may seem to one who doesn't understand the stakes, were for Newman as dangerous and painful and as powerful to alter his life as would have been the decision facing a Virginian in 1860; only the physical violence is missing. That late-in-life epilogue begins with this:

There can have been few more lonely men in the world than the aging Newman.

Actually, on reflection, and leafing through the book again, I think I will, after all, say that if you only read one book about Newman, this is, if not the only reasonable choice, a leading candidate. There can't be many that are at once so pleasurable and illuminating. It appears to be out of print now, but used copies are available at Abebooks and Alibris.

This book came into my hands more or less accidentally, as part of a deceased clergyman's library intercepted on its way to Goodwill. It was published in 1952. Stuck between the pages I found this seventy-year-old postcard supplied by the publisher, perhaps used by the original owner as a bookmark, as it now is by me: 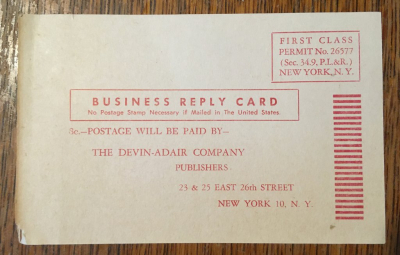 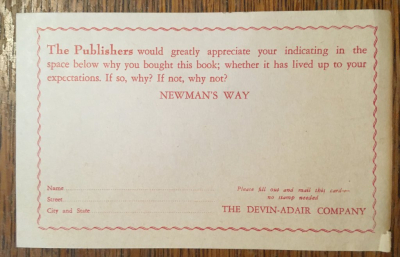 It's oddly poignant to me--as a relic of the book's original purchaser, and a relic of a time for which I'm not ashamed to say I feel some nostalgia. "New York 10, N. Y." The ZIP (for Zone Improvement Plan) code was not introduced until 1963.