As you have no doubt guessed, it's something of a trick question, with the obvious answer being wrong. It has to do with the probability of the event compared to the probability that it will kill you. The probability of my being struck by lightning is, obviously, much higher than the probability of an asteroid striking the earth. However, if the latter should happen, millions or billions will be killed, including me. So when you turn the statistical crank, apparently the odds are worse (for the individual) with the asteroid.

Someone has actually worked out the math. Obviously some assumptions have to be made about the likelihood of a killer asteroid strike, but his seem to be reasonable. He comes up with a 1 in 700,000 chance of death by asteroid, whereas 1 in 1,000,000 seems to be a generally accepted rough value for being struck by lightning. And since most people who are struck by lightning survive (I did not know that until yesterday), the odds against death by lightning are even greater. And they vary a lot depending on where you live.

And here's an interesting list of the top ten asteroid strikes in the history of the planet. Notice that the two most recent were roughly 35 million years ago, while the others are separated by tens or hundreds of millions of years.

If you had survived the Popagia strike of 35.7 million years ago, you might have thought with relief "Well, we should have at least another twenty million years before this happens again." Imagine your dismay when the Chesapeake Bay strike shows up almost immediately, only .7 million years later. I think that's another statistical misconception, similar to the one that makes a gambler think that he's due for a win after a string of losses. 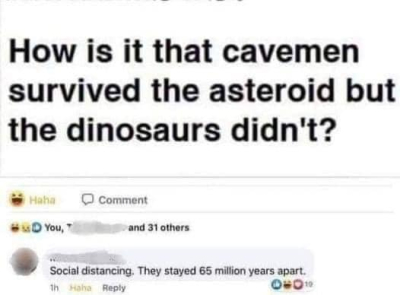 I call it temporal distancing and it's my chosen strategy for avoiding death by asteroid.

Whenever anyone cites statistics I assume they are either trying to mislead or they have been misled. I won't be taken in. The dwarfs are for the dwarfs.

When the asteroid is bearing down on us, don't say you weren't warned.:-)

:) Since there's nothing I can do about an asteroid, I'm ok with that. Though there are other issues where my attitude could definitely lead to bad outcomes (or protect me from bad outcomes - who knows. That's the problem.)