Light On Dark Water
Home Archives About
Fun With Statistics
It was not the best of times; it was arguably the worst of times.

Abigail Rine Favale: Into the Deep

I do not know how to pronounce the author's last name,  and for that matter am not entirely certain about her middle name. This bothered me a bit every time I picked up the book, and is, obviously, bothering me a little right now. But it didn't prevent me from reading, enjoying, and admiring the book.

Subtitled "An Unlikely Catholic Conversion," this is the memoir of a young woman (now middle-aged, I guess) who grew up in a conservative evangelical family and subculture, partly rejected and partly drifted away from it in favor of academic feminism, and in time found her way to the Catholic Church.

That is an unusual but in its broad outline not exactly unheard-of story. Conversion stories in general are hardly rare, even conversion of many initially quite hostile to the faith; the propagation of the gospel begins with them. But they are all by nature somewhat similar, and are not necessarily of great interest to anyone except the convert and those who know him, including especially God.

I had a personal reason for reading this one. I have my own unpublished, probably never-to-be-published, memoir, and a few years ago I queried a certain Catholic publisher about it. The editor replied courteously that although they have published conversion memoirs, they did not sell very well and he doesn't expect to publish any more such. Since then I've read a few that have managed to get into print in recent years and to get at least some attention from at least the Catholic press. I wanted to see what made them worthy of note.

Into the Deep is the most recent of these (most recently read, I mean, not published), and the best. That's not because it's necessarily the most intrinsically interesting story, but because it's told so well. It's quite well-written in the micro sense that the prose is well-crafted, and in the macro sense that the narrative is vivid and brings home a real sense of the author's experience. And also because her specific struggle involves matters that are very much part of our current cultural malaise: the nature and meaning of the sexes, the role of women in the world and in the Church, especially the confrontation of feminism and the Church.

Back in the 1970s, when feminism--what I have since learned is known as second-wave feminism--was at its height, I was mildly intrigued by it and sympathetic to it. I thought then, and still think, that women in general are pretty wonderful, and that in many ways they get a bad deal. But I don't think I have many illusions about them, and I couldn't help being skeptical of what seemed to be one of feminism's assumptions: that apart from the obvious physical things there is no significant difference between the sexes. That this was false, I thought, should be obvious to anyone who looked at actual men and women. And I thought it would be a good thing if a feminist thinker would explore those differences deeply rather than try to dismiss or erase them.

I didn't continue paying much attention for very long. The basic feminist doctrine seemed to be twofold: (1) men and women are exactly the same, except for those ways in which women are superior; (2) men and women should be treated in exactly the same way, expect for situations where it is to the advantage of women to be treated differently. This only caused me to be amused by the way feminism confirmed the stereotype of women as illogical. It certainly didn't help my perception that feminism was (and still is) zealous in political causes, most notably advocacy of abortion, that were at the time beginning to strike me as destructive. (I long ago moved past any ambivalence about their destructiveness.)

Well, here is a feminist, or at least former feminist, who has done the exploration which I had hoped to see. And it has led her precisely into the deep, into the profundity of sexual significance. Here was an important turning point:

Most of the time life moves at such a crawl that we remain blind to its constant change, but there are some experiences, like becoming a parent, that strike like lightning and, in just a flash, we are utterly altered.

This is what happened to me. When I first became pregnant, I was comfortable settled into my own unique brand of postmodern, feminist Christianity. I remember lounging on the couch amidst waves of nausea, watching news coverage of the controversial contraception mandate, rolling my eyes in anger and disgust at those regressive Catholic priests in their prim white collars, telling women what to do with their bodies.

Yet almost exactly two years later, I would be standing before such a priest at the Easter Vigil Mass, publicly confessing my desire to be received into the largest, oldest male-helmed institution in the world, the Roman Catholic Church.

That breaking-open is of course among other things quite literally physical: a sensation and an experience that men can never know. The moment occurs less than one-third of the way through the book, so there is a great deal of road left to travel from here, and a great deal of reflection. There's a nice balance of the narrative and the abstract--of, to adapt the famous feminist catch-phrase, the personal and the theological. I recommend it both as a conversion memoir, and for that matter a memoir, period--I enjoyed the recounting of her early life--and as a venture into the rich topic of Catholicism and gender. 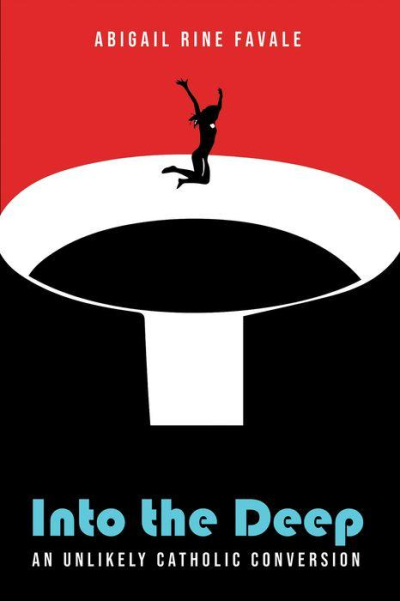 I'm not keen on this cover. Apart from the fact that it's not especially appealing as a graphic, it suggests to me not conversion but a woman falling in love with a priest.

The venture continues with her new book, The Genesis of Gender, "a crash course of sorts, an insider’s look at the implicit worldview of gender theory, so people are better able to recognize the underlying claims that are being made." Here is an interview at Catholic World Report in which she discusses it.  Also at Catholic World Report, she demonstrates that she has by no means compromised her objections to some notions of feminine submission to male authoritarianism: she excoriates a book called Ask Your Husband, which seems to be an unwitting confirmation of secular feminism's view of Catholic thinking on this subject.

It seems to me that the current crisis in which enlightened opinion is no longer willing to say that a woman is an adult female human being is a fairly natural development from certain aspects of feminist thought. To their credit some feminists are willing to oppose it, which is hardly the first time that ideological revolutionaries have been horrified by some of the conclusions, theoretical and practical, drawn from their premises. It's going to be a long time before we settle down, culturally, but in the meantime Abigail Favale and others are doing very valuable work toward clearing up the very clouded waters.

A friend of mine who teaches philosophy at a local Catholic college says that The Genesis of Gender is very good.

It probably is, but the sad fact is that I probably won't read it. It's an important subject but not one I want to spend a lot of time on.

I sort of feel the same way, tbh.

Can't read everything worth reading. Or even a fraction of it.

The older I get the "pickier" I am about what I read. My book buying is a fraction of what it used to be.

I'm not so much getting picky as narrowing down as a function of age. It's like moving into a smaller place and having to decide "am I ever going to read this book again?" and getting rid of it if the answer is no. Kind of a pre-emptive variation of that. "Do I really want to give that book my dwindling time?" Usually as in this case it's not so much anything wrong with the book as that the subject is not one I want to focus on.

One book I may buy and read is Fr. Aidan Nichols's new one about Sigrid Undset:

Apropos the Ask Your Husband book mentioned above, this bit from the Babylon Bee:

My pickiness has more to do with buying than with reading, I guess. I read just as much as I always have, but I get a lot more books from the library nowadays.

I cut way back on buying books a long time ago, because of lack of shelf space. Too many unread ones that I wouldn't necessarily want to keep once I read them