I don't have to say which queen. I'm tempted to say, very unoriginally, that her death is the the end of an era. But it really isn't. The era had already ended, and she was one of the last remnants of it. Removing most of the power from the monarchy had the effect of emphasizing its value as the symbol of an ideal, and she was a worthy representative.

As someone said elsewhere, she knew what it meant to do one's duty, no matter what. That's not much understood now, though I think, or hope, that when it is understood it's still admired.

Most deaths are personal. They involve the deceased and those who knew him or her. Even when it's a public figure, most of us generally note it with only mild interest, perhaps wonder in some cases how it will affect this or that thing in which the person was involved. Politician: who will succeed him or her? Artist: either "well, his best work was in the past" or "there might have been great work yet to come." Rarely do we feel that the whole world has somehow changed. I felt a bit that way when Johnny Cash died, not because he was such an important artist but because he had always somehow been a significant part of the world, and that the world was changed by his absence. I feel much more that way about Elizabeth's passing, because she represents much more. 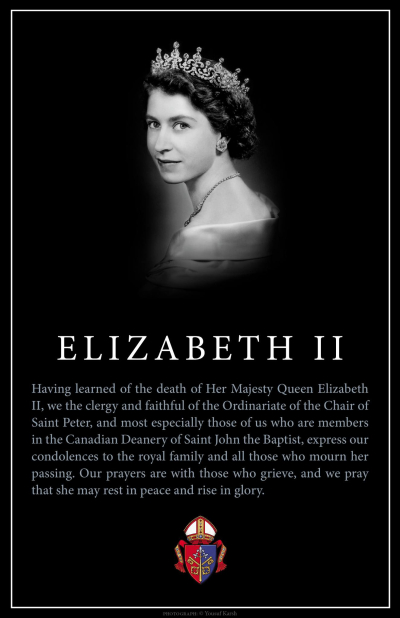 I managed to suppress this somewhat nasty remark in the post, but can't resist adding it as a comment: now we live in the era of Meghan.

Well said, Mac. My sentiments are quite close to yours. She was 96 so there should be no real sadness, but such a substantial change in the world is quite mind-boggling.
Johnny Cash is a worthy example.
And now, God Save the King, Charles III

Yes, God Save the King.

Agreed, and well-said. And I like the sentiment of the Ordinariate's statement very much.

God Save the King, indeed.

Although I of course did not think that the Queen would live forever, I find myself much sadder than I expected to be. I realize now that as long as she was alive I harboured the hope--well, the fantasy--that the era she represented could somehow be revived.

Yes, God save the King. It will be hard to remember to sing it that way (if the occasion arises, which I suppose is not likely now that I live in the US).

It feels to me like a cultural variant of the Hopkins poem:

"It is the blight man was born for.
It is Margaret you mourn for."

The sadness is for ourselves, or at least my self, knowing that something has changed irrevocably, and mainly for the worse. It doesn't constitute the change, but it marks it.

Lovely first speech by King Charles. It ends with "may flights of angels sing thee to thy rest".

I think Charles has aged quite well since all of the unfortunate episodes from his first marriage. You certainly can't accuse someone in Mac's age group of being part of the current generation! ;-)

I will watch BBC when I get home. They are likely re-playing his speech.

I'll have to wait till later, too. I'm sure it can be easily found online.

I don't know exactly what to think of Charles, or what to expect of him. I've always been suspicious of the angel-Diana vs. evil-Charles view, but who knows? Whatever the details are, it was a very sad story. "King Charles" is going to take some getting used to.