Light On Dark Water
Home Archives About
"Only the dead...
Typepad problems

Carl Trueman: The Rise and Triumph of the Modern Self

It's always true of human societies that serious and seemingly, perhaps actually, insoluble problems exist, but there are degrees, and it's more the case now than ordinarily. It's not always the case that an entire civilization plunges, as ours has done, into ideas and behavior that are obviously self-destructive and can only result in decline, possibly collapse. In some ways these are even manifestly crazy, in the sense of being fundamentally at odds with reality.

Those who recognize and are properly alarmed by this are frequently engaged in a somewhat desperate search for a solution, usually at least partly political, because our culture is now very heavily politicized. But I don't think our problems can be solved in any decisive way. I don't see how the plunge can be stopped, because the most powerful elements of society are passionately committed to it. We'll just have to ride it out and hope that it won't be fatal (whatever that might mean).

Obviously there is much that can be done here and now to slow it down, at least, and to ameliorate the harm being done. And I admire those doing the difficult work of--to choose one example--resisting the teaching of sick ideologies to school children. Nor is the organized political opposition insignificant or (entirely) ineffective, flawed though much of it is. More power to all of them.

But I've lost much if not all of my interest in talking about solutions. What interests me more now is the question of how we got here. Or, more accurately and importantly: where the hell are we? What exactly is going on? Philip Rieff's Triumph of the Therapeutic shed a great deal of light on those questions. In this book, Carl Trueman brings Rieff's insights, published almost sixty years ago, and those of others into the present. The others are, principally, Alisdair Macintyre and Charles Taylor. And now I'm going to have to read them, too.

If you want to understand why this thing that we call the culture war is so intractable, you might read part 1 of Trueman's book. (It's probably in your local library, as it's in mine and I live in a fairly small town.) There he lays out the situation: the fundamental difference is between those who view the human situation as fundamentally a matter of finding and accepting one's place in an objective external order, usually (maybe necessarily?) a sacred order, and those--the more representatively modern school--who see the individual as more or less creating or inventing himself, and, as a natural corollary, wishing or demanding that the world accommodate, or be subjected to, the self. When the two parties disagree, as they now do

...there is no real argument taking place. There is no common authority on which they might agree to the terms of debate in order to determine exactly what it is they are debating. The one looks to a sacred order, the other to matters that do not rise above the concerns of the immanent order.

If there is no reasoned debate, there can be no reasoned compromise, only a stalemate of warring armies. And that's probably the best we can hope for in the near future.

The rest of the book traces the development of this contemporary concept of the self, and the social and political implications of it. First came Rousseau's assertion that man is "born free but everywhere in chains," the chains being or at least beginning with the degrading and corruption influence of Society. From there to the sexual revolution and its current phase is a grimly fascinating story, running through Freud, Marx, and 20th century figures such as William Reich and Herbert Marcuse, and summarized in these two passages:

...the rise of the sexual revolution was predicated on fundamental changes in how the self is understood. The self must first be psychologized; psychology must then be sexualized; and sex must be politicized.

"The personal is the political," said the feminists. I always took this to mean that, for instance, when a husband leaves his socks on the floor, and his wife picks them up, a significant political event has occurred. And I think they did mean that. But Trueman demonstrates that it also means something much larger, something absolute, something bigger than anything else in the minds of the sexual revolutionaries (a category which includes a large subset of progressives but not all). This is the long-developing revolution which became a truly mass movement in the late 1960s, and is now, as is often observed, in effect a militant religion. Its strictures were foreshadowed by Reich, who believed

...that the state must be used to coerce families and, where necessary, actively punish those who dissent from the sexual liberation being proposed. In short, the state has the right to intervene in family matters because the family is potentially the primary opponent of political liberation through its cultivation and policing of traditional sexual codes.

All this seems to me essential for understanding what's happening, which is to say that this is an essential book if you want that understanding. It is not the only pathology at work, though. Trueman does not deal with directly political problems, chief of which in my opinion is the mysterious apparent death wish of a large segment of Western culture, the hatred and repudiation of its own past and ferocious denunciation of those who persist in valuing its traditions, especially of course its religious tradition, and who refuse to make the expected acts of repudiation. There is probably a connection between this and the hypertrophied narcissism described by Truman, but I'm not sure what it is. 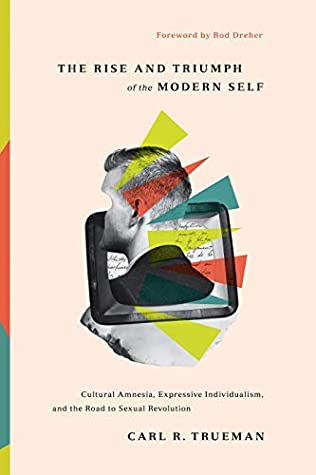 I was going to say more about Vatican II and the article by Larry Chapp to which Marianne linked in the comments on the previous post, but I'm in the process of moving (not far, still same locale) and both time and internet access are limited. Next week....

Posted at 10:50 AM in Books, Current Affairs, State of the Culture, Tyranny of Liberalism, What Is Actually Happening | Permalink | Comments (11)

In what is perhaps an illustration of the decline of our culture, I live in a county of nearly a million people adjacent to Washington DC and my public library system does not have this book. In the entire state ILL system there are three copies available (as well as one e-copy and two paper copies that are not available through ILL).

That’s disheartening. And a little surprising, but not all that much. This is not some superficial noisy polemic, it’s a serious intellectual work.

It’s a bit misleading for me to say my small-town library has it, because the library is part of a countywide system, and there are over 200,000 people in the county. Still… My wife says our library is pretty responsive to requests so maybe someone asked for it, or multiple someones.

And I doubt that our librarians are especially conservative.

"I've lost much if not all of my interest in talking about solutions. What interests me more now is the question of how we got here. Or, more accurately and importantly: where the hell are we? What exactly is going on?"

That's pretty much the same place that I'm at. My interest in solutions is pretty much limited to trying to "strengthen the things that remain" locally. But I am very much interested in where we are and how we got here, inasmuch as it might give us some insight as to where we could end up societally speaking. I have a feeling that down the road it's not going to be easy to be a "traditionalist" of any sort. But how far away from that we are is difficult to predict.

One thing's for sure -- there is great pressure being put on the churches and on religious people in general to accept the logic of the Sexual Revolution. That this goes hand-in-hand with the advance of what Paul Kingsnorth calls 'The Machine' seems rather obvious to me. Technocracy and cultural liberalism are joined at the hip, and resistance to one thus entails resistance to the other. Hard to get people to see that though.

"Technocracy and cultural liberalism are joined at the hip..." They certainly are, and a related question for me is whether the technology itself inevitably leads to the pathologies. Can we have the amelioration of so many of life's physical hardships which is provided by technology without thinking that now we can just be and do whatever we can imagine without regard for any natural order? By technology there I don't mean just "high tech" but also basic things like water piped into your house and sewage piped out. We tend to forget just how much infrastructure and knowledge are involved in those.

Yes, that’s what I meant to be saying with “usually (maybe necessarily?) a sacred order.” I guess there are degrees of sacredness—the Confucian order not sacred in quite the same way as the Christian-Jewish-Islamic order. But still binding and not a matter of opinion.

Yes, I think that if you believe in any sort of "natural law" some level of sacred order necessarily comes with that. Rieff's point is that ours is the first culture in history to reject that outright, or to think we can create it ourselves, which amounts to the same thing. But in that instance, as someone has said, our morality rises no higher than our own heads, and thus is ultimately arbitrary and only imposable by force (will-to-power).

I believe that certain aspects of the technology definitely do. One of the ways we miss this is by our tendency to think of technology as neutral. But that's like saying sex is neutral. It may be so on a very superficial level, but morals/ethics inevitably attach to it in the usage.

Typepad is having big problems today. If you see this it means I managed to slip a comment in for the first time today. If you’ve had a problem it’s not on your end.

Maybe the problems are fixed. I tried to say this yesterday but was unable to:

Any new technology changes things pretty much by definition. In that sense it can't be neutral. Life before and after the bow and arrow was quite different, I'm sure. To assume that the change is always for the better is pretty naive at best.

One thing I really hate in the current environment is the tendency of experts in any given technology to assign to themselves the making of ethical judgments about it. I ran across a particularly egregious example of that the other day. Can't remember now exactly where it was but someone involved in genetic research claimed that all ethical questions involved in it were the province of him and his peers.